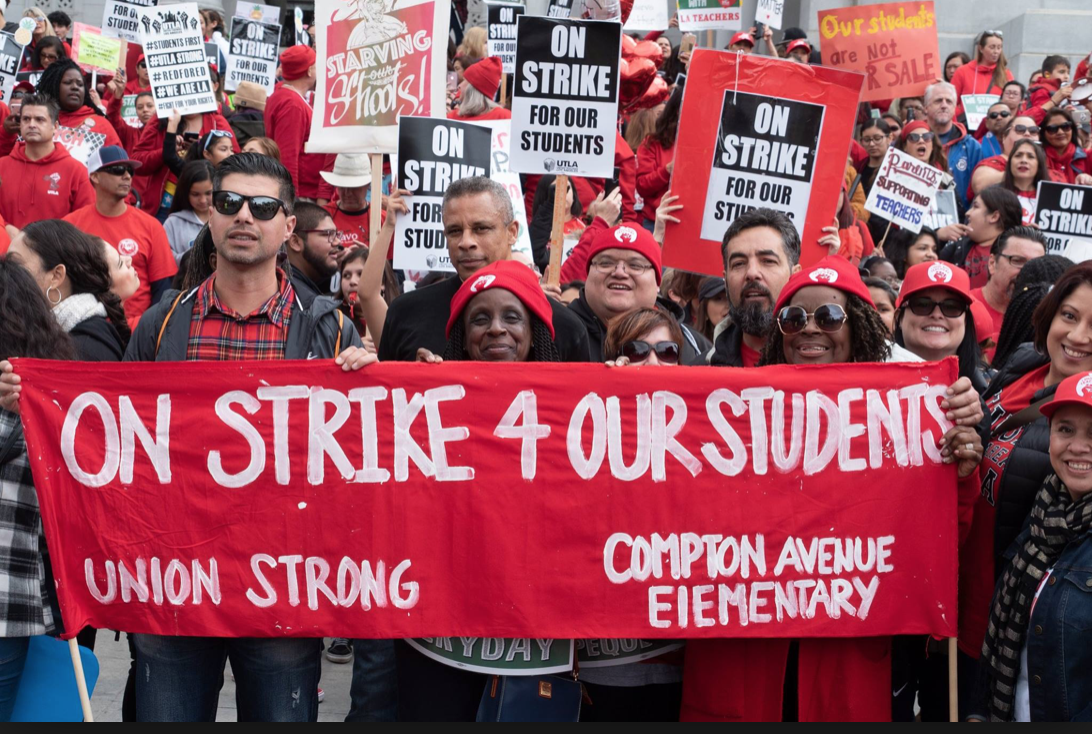 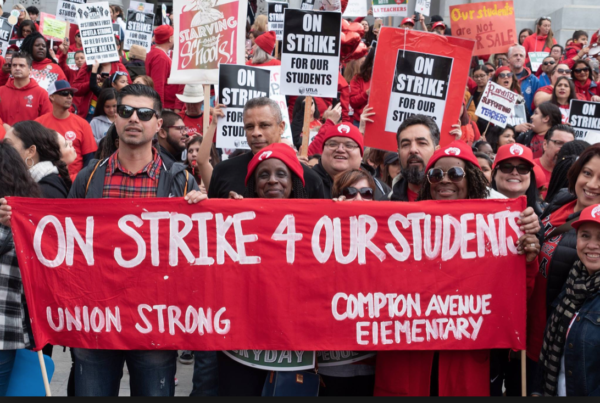 After six days of striking and mass mobilizations in the streets, Los Angeles teachers, joined on the picket lines and demonstrations by parents and students, won an important victory: holding the line against further privatization of the public schools.

The New York Times ran a front page story headlined Strike Throws Cold Water on a City’s Embrace of Charter Schools. The article began, “Carrying protest signs, thousands of teachers and their allies converged last month on the shimmering contemporary art museum in the heart of downtown Los Angeles. Clad in red, they denounced “billionaire privatizers” including the museum’s patron, Eli Broad. The march was a preview of the attacks the union would unleash during the teachers’ strike….”

[!–BS], who are often from outside the communities in which the schools exist. Supporters of the Los Angeles charter school sector have included donors such as Mr. Broad and Mr. Hastings [co-founder of Netflix]; Michael J. Bloomberg [billionaire former mayor of New York City]; Laurene Powell Jobs, widow of Steve Jobs; Donald Fisher, founder of Gap; and members of the Walton family, heir to the Walmart fortune.”

Charter schools are so named because their private operators have to get a “charter” from an authorizing body to set one up. In California, that body may be a local, county or state school board. While they are privately administered, they are publicly funded. That is, they steal money from the public school system, while operating as businesses.

Both Democrats and Republicans have promoted charter schools, as can be seen by the fact that Obama’s secretary of education, Arne Duncan, championed them, and Trump’s head of education, Betsy Vos, carries on Duncan’s tradition even more vociferously.

Throughout the country, there has been a drive by the ruling rich against public education for decades. Part of this has been the progressive underfunding of public schools. The tax money that the charters take makes matters worse.

“The strike began on Monday, January 14,” an article by L.A. teachers in the U.S. Socialist Worker reports, with UTLA [United Teachers of Los Angeles] educators starting their twice-a-day picketing routine – once before school started and later right before students were let out – in a relentless rain.

“The energetic and creative pickets won the support of both students and parents. Confidence on the lines grew throughout the week. At Roosevelt High School … teachers delayed scab educators and other school personnel, including ancillary staff, from crossing picket lines.”

While the schools remained technically open, they were effectively not functioning during the strike.

“Morning picket lines have been followed by daily rallies at locations throughout the city. The UTLA has organized these mobilizations to put pressure on the forces in Los Angeles that have been central to the corporatization of public education.

“On the first day of the strike, teachers and their supporters marched from Grand Park in front of City Hall to the LAUSD [Los Angeles Unified School District] headquarters. The next day it was the offices of the California Charter School Association…. Both these rallies attracted around 60,000 people – nearly twice the UTLA’s membership….

“On Wednesday, there were spirited rallies at seven regional LAUSD offices. At LSUSD East, a raucous crowd defied heavy rains to fill the street, dancing and chanting as they shut down a major thoroughfare….

“The first three days of the strike put pressure on the district to return to the bargaining table on Thursday [after first refusing to bargain during the strike] for negotiations mediated by Mayor Eric Garcetti’s office. But with more stormy skies still overhead, teachers were back in force on the picket lines.

“Some schools formed blocks-long human chains between buildings to demonstrate their collective resolve. They were met by almost constant honking from drivers showing their support.

“The first week culminated on Friday, the first sunny day of the week, with an explosive 60,000-person mass rally, again at Grand Park in downtown Los Angeles. A sea of red engulfed the streets in front of city hall, where negotiations were taking place.”

UTLA President Alex Caputo-Pearl “electrified the crowd with a militant speech harking back to the 1930s era of mass labor struggles. ‘The last five days of striking have stunned our naysayers,’ he said. ‘If you’re a boxer, do you know what you do with a stunned opponent?’ he asked, before answering his own question: ’You double-down and keep on punching!’

“Caputo-Pearl emphasized that power lies in the hands of the rank-and-file teachers, that their militancy matters at the bargaining table, and that they are leading the struggle for all of public education. And he pulled no punches about the Democratic Party and its role in the privatization of Los Angeles schools by underfunding them in ‘the bluest of the blue [Democratic] states.’ “

The one pro-teacher on the board submitted such a motion, which the rest of the pro-charter members with one exception also voted for, under protest. So now the ball is in the court of the Democratic state legislature and Governor. We’ll see what they do.

Because of decades of deteriorating conditions, the teachers raised many other demands. One of these was to reverse the severe lack of nurses and other necessary personnel. A significant win was that now there will be a nurse in every school; a librarian in every secondary school five days a week; reduction of the student to counselor ratio to 500 to 1, still too high but much better than it was, and better than in most large urban school districts in the state.

Large class sizes was another major issue. Here there was only a token gain. Many classes had contained over 40 students, which will be reduced to 39, still way to large for effective teaching in an inner city school – I know, having been a teacher for a time in Oakland.

Part of a pattern

The Los Angeles strike continues a wave of recent teachers’ strikes in the country. Last year saw a victorious strike by rank-and-file teachers in West Virginia, a state with a solid Republican government, where public workers’ strikes are illegal. It spread to other similar states. In these strikes teachers wore red T-shirts to show their solidarity in these “red” states. Wearing red has become a nation-wide symbol for teachers’ struggles.

In three of these states legislatures are retaliating, trying to pass bills to make teachers’ working lives more difficult, reports an article in the Washington Post.

In West Virginia under the proposed bill, teacher pay raises and funding for the health care system for state employees would be tied to provisions including: increasing class sizes; denying pay during future strikes; using public money for private schools, including charter and religious schools.

In Oklahoma, proposed legislation would require any organized protest of 100 or more people at the state Capitol to pay “$50,000 in advance to the state agency that provides bond funding for government buildings.” Another bill would make it illegal for any “board of education or school district employee … to strike or threaten to strike or otherwise close schools or interfere with school operations as a means of resolving differences with the board of education, the State Department of Education, the State Board of Education, the Legislature or any other public official or body.”

Any teacher participating in a strike would have their teaching certificate

In Arizona, a new law would require the State Board of Education to adopt a “code of ethics” for teachers that calls for an “explicit ban on politics in public schools. The language is nearly identical to a proposal advanced by the ultra-right David Horowitz Freedom Center.”

Another bill seeks to prohibit strikes by banning public schools from shutting down “except during approved breaks, holidays or during a national or environmental emergency.” Also, the state’s Attorney General would be required to investigate a school district or employee accused of violating state law.

Another bill would prohibit payroll deductions for union dues for school district, local government and state employees – except for cops and firefighters.

Clearly the teachers’ battles will continue. In West Virginia, teachers are already mobilizing to fight the bill in that state. Teachers in Oakland are getting ready for a strike if necessary, as are teachers in other Democratic states.