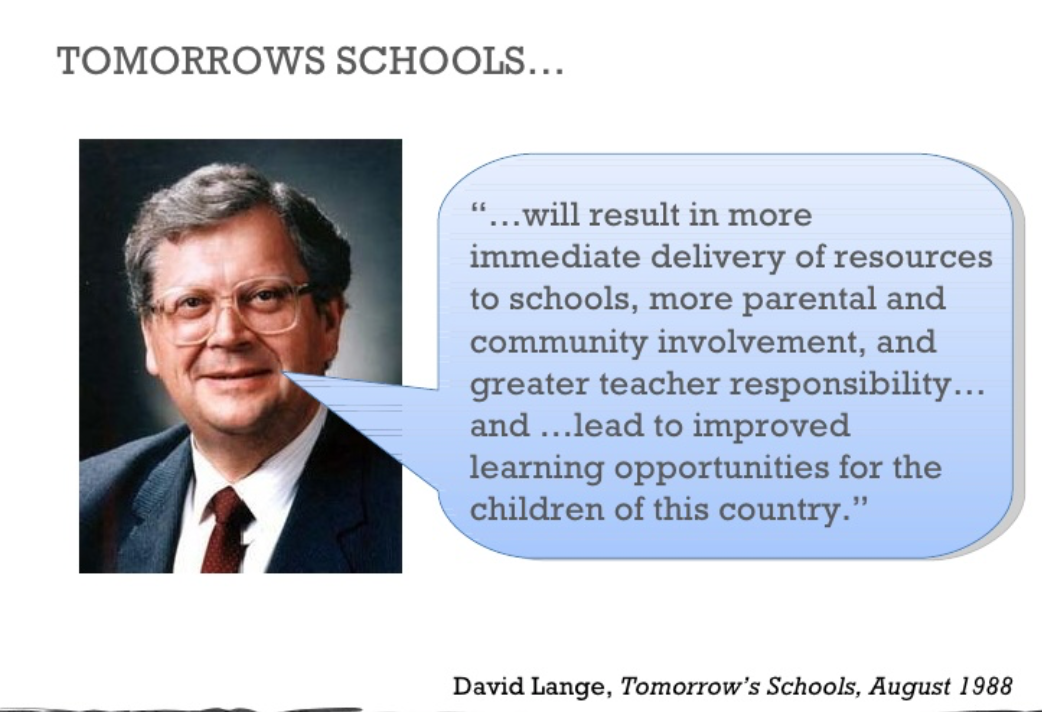 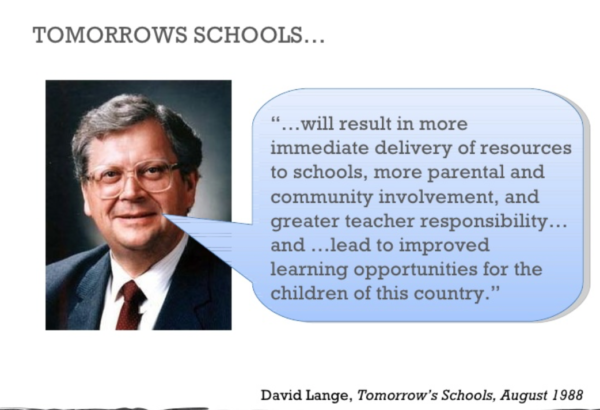 Exactly 30 years ago, a taskforce headed by a supermarket magnate, and urged on by an ideological Treasury and rampantly privatising Labour Government, came up with a report on schooling that led to the Tomorrow’s Schools reports. These reforms, owing nothing to good educational practice and everything to Friedmanite economics, have done their best in the resulting period to destroy our society and environment.  Our society, by ripping away white from brown, rich from poor and splitting communities. Our environment, by encouraging parents to believe that choosing different schools than the closest one will somehow improve their child’s educational achievement, thus encouraging them to ship their kids (in mandatory SUVs) over the other side of town each day.

For those of us with a commitment to strong public education, it has been a thirty year fight. I want to remember, in particular, the work of the late Professor John Codd, who took on David Lange time and time again over his claims that the reforms would improve educational outcomes.  And, also, Emeritus Professor Ivan Snook, who died just a couple of months ago, not knowing the outcomes of the government’s taskforce on schooling, after fighting for change over the last 25 years of his life.

My friend John Minto has also written about the reforms on these pages, so I don’t intend to repeat his comments here. I agree with him entirely. The proof of the pudding will be in the changes that emerge, of course, but it is a wonderful breath of fresh air to have the major problems of our schooling system at last acknowledged by a government. Sorry about the mixed metaphors.

The concept of a self-managing school was inherently flawed.  Early on, an OECD inspector labelled Boards of Trustees ‘self-perpetuating oligarchies’. Their main role was to reproduce schools in the image of their own ambitions for their children.  The governance model was flawed – far too many governance bodies to bring about evenness and fairness across the country, far too many inexperienced governors needing training (usually provided by the principal) and little logic in the system.  We should not forget that the intention of those setting up the system was to make Boards the employers of teachers at each school, in order to break down the national collective bargaining system that has seen teachers, relatively speaking, maintain their pay and somewhat improve their conditions (compared to other sectors).

I have not yet made up my mind about the replacement governance model, called ‘education hubs’. I would be interested in people’s thoughts on these.  The idea is to balance the power of the Ministry of Education with relatively powerful agencies at the regional level that have both a system and practice orientation.  This will need massive changes to the Ministry, which has not been fit-for-purpose ever since it was set up, and certainly not in the past decade.

I don’t know how to solve the system problems that have resulted from school choice – especially the white and middle class flight, and the hollowing out of lower-decile schools. The new governance system, whatever it is, will need to fix deeply embedded problems at the same time as governing what it inherits.  That is, the schooling system that is being taken over is a fairly sick one, in places.

On the other hand, collective management should solve the numerous issues that have arisen from disputes between staff and Boards in schools. I have lost count of the number of commissioners that have had to be put into non-functioning schools.  Hopefully all of that will now end.

A good education for all is the key to our future. It always has been, actually, and the inequalities and gaps of the past 30 years have damaged our country immeasurably. Our system is much more complex today because of a more diverse population, more social inequalities, rising emotional and behavioural problems and a complex curriculum.

So, we can joyfully announce that a baby is coming.  What the baby will look like is still to be determined.  Minister Hipkins and his associates have a lot of work to do.  They need to approach it pragmatically and with an eye on a system that works.  Professional autonomy needs to be effectively balanced with system support. Adequate resources need to be provided.  1988 should not be the blueprint. 1938 should, when Minister Fraser noted that education for all, regardless of location, class or other factors, would be provided, of the best quality for everyone.  A prosperous, kind and just nation depends upon it.