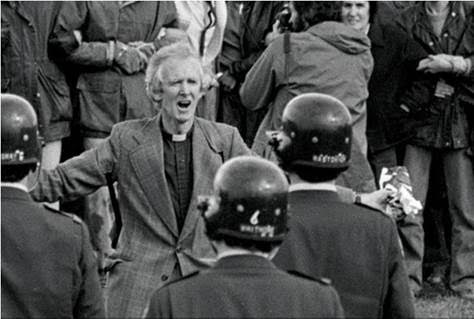 IF ONLY the New Zealand of 1981 had possessed health and safety legislation to match the laws of 2018. It took Pat McQuarrie, at the controls of the light aircraft he had stolen from Taupo airport, and his threat to fly it into the grandstand of Hamilton’s Rugby Park, to persuade the Police Commissioner, Bob Walton, that it might be in the interests of the health and safety of the spectators gathered to watch the Springbok-Waikato Rugby match on 25 July 1981 to cancel the fixture.

Fast-forward 37 years and just think how easy it would be to achieve the same result today. No need for the likes of Pat McQuarrie in 2018. A few hundred raggle-taggle left-wing gypsies threatening to “confront” Rugby patrons if they attempted to enter the ground is all it would take to convince the New Zealand Rugby Union that the game would have to be called-off.

Crikey! If we’d had the same health and safety rules back then as we have now, then the Springboks wouldn’t have got to play a single game! The anti-tour movement was just so huge in 1981 that its entirely credible threat to organise major disruptions of air travel, the railways and the motorways would have been more than enough to induce Rob Muldoon to instruct the Rugby Union to withdraw its invitation to the South Africans.

Certainly, the state television network would have required little more than the threat of interference with its super-expensive transmission equipment to announce its determination to boycott the Springbok Tour altogether. Of course, without television coverage of the matches it would hardly have been worth the Rugby Union proceeding.

Such a shame that in 1981 the authorities cared so little for the health and safety of New Zealanders that they were prepared to deploy thousands of Police and employ the armed forces to lay thousands of metres of barbed-wire to ensure that the rights of Rugby players and spectators were not infringed. Not only that, but if any protester attempted to prevent the Rugby matches from proceeding then they could expect to be cracked over the head with a Policeman’s baton.

Yep, the consequences for exercising your right to free expression back in 1981 could be severe. When the Springbok-Waikato game was called-off, the protesters who had made it onto the field were lucky to escape with their lives. Bottles and beer-cans rained down upon their heads, leaving many of them bloodied and bruised. Spectators pouring out of the park then attacked the first-aid station treating the injured.

New Zealanders back then were horrified at the level of violence unleashed on the protesters. But that’s only because people were much less aware in 1981 that if a person “talked shit” then they deserved to “get bashed”. It was nowhere near as well understood in those days that speaking-out against the prevailing ideas of the time constitutes nothing less than an open invitation to everybody who subscribes to those ideas to have at the dissident with fist and boot.

The 1980s were such unenlightened times. The appalling events  of that era could never happen in the Aotearoa-New Zealand of 2018. Our health and safety laws simply wouldn’t permit it!