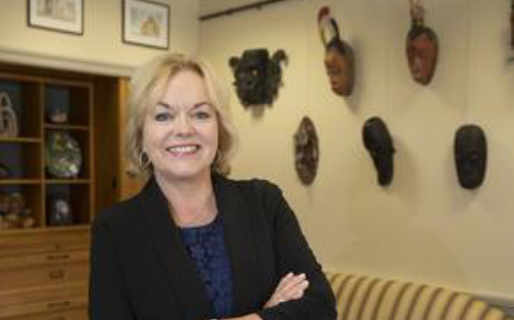 Judith Collins posing beside her wall of heads she tears off kittens.

It’s a dumb thing to do, and on the surface of it, Judith’s retweet of a fake news story is more embarrassing than sinister, but when given the opportunity to back down and acknowledge she screwed up, Judith has doubled down…

The YourNewsWire.Com article was headlined “France Passes Law Saying Children Can Consent To Sex With Adults”. In fact, France has just passed a law that made it far easier to charge adults who had sex with children under 15 with rape. It has strengthened its consent laws, not weakened them.

The article said France was the latest nation to “give into pressure from an international network of liberal activists determined to normalise paedophilia and decriminalise sex with children” by “abandonment” of its age of consent laws.

France had already made sex with any children younger than 15 an offence, but it did not automatically classify all such sex as rape – neither does New Zealand.

The new law makes it far easier for prosecutors to do so by introducing a new offence of “abuse of vulnerability”. Critics have argued that the new law does not go far enough, but not that the law goes backward.

The website the article came from has been described as a “fake news” outlet by multiple sources including fact-checking site Snopes and The Times. It includes bizarre, false articles claiming pop singer Katy Perry has endorsed cannibalism.

Collins responded to those on Twitter who asked why she was tweeting out fake news by tweeting to reputable news sources covering the same topic, but in a deeply different way.

She told Stuff she didn’t necessarily “agree” with every article she tweeted but wanted to draw attention to the issue.

…her defence as to why she tweeted a fake news story from a fake news site must surely go down as one of the most disingenuous in political history, watch her bend over backwards with her explanation…

“I’m just concerned about the story about France itself,” Collins said.

“I was shocked to learn there is no age of consent in France….This is a civilised country, they should know better.”

“I often retweet articles of interest. I don’t have to agree with everything in those articles, otherwise I would never tweet anything except my own stuff.”

“I don’t censor people. I don’t say you shouldn’t listen to people you don’t disagree with. I say don’t shoot the messenger – and the message to me is not about allegations of liberal conspiracy, it’s that child sex abuse is wrong, it’s disgraceful, and in some countries it is easier than others.”

…so she’s not concerned about spreading fake news from a fake news site, she’s concerned with an issue that doesn’t actually exist the way the news story she retweeted presents it as?

This matters because if MPs are spreading false information with slants that make InfoWars look like a reputable fact checked news agency, they simply add to the continuing spiral downwards and promote subjective truths as opposed to objective ones.

We can’t expect citizens to conform to basic rules of reality if our representatives won’t.