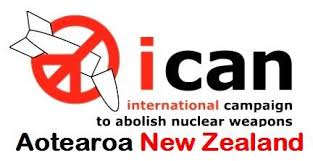 International treaty examination of the Treaty on the Prohibition of Nuclear Weapons: Key points for submissions

On 14 May 2018, the Minister for Disarmament and Arms Control announced that Cabinet had agreed that New Zealand will ratify the Treaty on the Prohibition of Nuclear Weapons (TPNW); and on 18 May, the Foreign Affairs, Defence and Trade Select Committee (FADTSC) called for public submissions for the international treaty examination of the TPNW. The closing date for submissions is Friday, 8 June 2018 – the 31st anniversary of the commencement of the New Zealand Nuclear Free Zone, Disarmament and Arms Control Act.

This guide has four main sections: background information on the TPNW; key points you may wish to include in your submission; how to make a submission; and where you can get further information. There is also a note at the end about the consultation for this guide and thanks to those who contributed to it.

The TPNW was adopted by 122 states during the final session of the UN Conference to Negotiate a Legally Binding Instrument to Prohibit Nuclear Weapons, Leading Towards their Total Elimination, on 7 July 2017.

The TPNW bans the development, testing, production, manufacture, possession, transfer, use or threat of use, deployment, installation or stationing of nuclear weapons and other nuclear explosive devices, as well as assistance, encouragement or inducement of any of those prohibited activities. It provides a pathway for nuclear-armed states to join the Treaty and destroy their nuclear weapons in a time-bound, verifiable and irreversible manner. It contains provisions for assistance to those affected by nuclear weapons testing and use, as well as for environmental remediation of areas affected by nuclear weapons testing and use.

The TPNW opened for signature on 20 September, and currently has 58 signatories and 10 state parties. It will enter into force 90 days after the 50th ratification.

New Zealand played a leading role in building support for, and negotiating, the TPNW. It voted in favour of the 2016 UN General Assembly resolution (A/RES/71/258, 23 December 2016) mandating the convening of the conference which negotiated the TPNW; and actively contributed to, and was a Vice President for, the two negotiating sessions, held in New York from 27 to 31 March and from 15 June to 7 July 2017.

New Zealand was among the first states to sign the TPNW when it opened for signature on 20 September 2017. The FADTSC international treaty examination is the final stage in the process for New Zealand to ratify the TPNW and thus become a state party to it.

· Key points to include in your submission

Ratification of the TPNW is a comparatively straightforward process and there is no reason for any delay. Its provisions are ones that all New Zealanders can support, and our early ratification will encourage other states to join it.

It would be both appropriate and desirable for the FADTSC to conclude the international treaty examination and report back to parliament urgently so that New Zealand’s instrument of ratification can be lodged as soon as possible – ideally before 7 July 2018, the first anniversary of the TPNW’s adoption.

There is no need for specific enabling legislation, or any legislative amendment, for New Zealand to ratify the TPNW because all of its provisions are already covered by existing domestic legislation and policy.

The key prohibitions in the TPNW (Article 1) are mainly included in the New Zealand Nuclear Free Zone, Disarmament and Arms Control Act 1987. The jurisdictional gap in Section 5 of the Act is covered by other legislation, including the Terrorism Suppression Act 2002, the Immigration Act 2009, and the Crimes Act 1961.

The TPNW prohibition on nuclear weapon testing (Article 1) is covered by the New Zealand Nuclear Free Zone, Disarmament and Arms Control Act and the Nuclear-Test-Ban Act 1999.

The TPNW requirement for state parties to adequately care for individuals under its jurisdiction who are affected by the use or testing of nuclear weapons (Article 6.1) is covered by the Veterans’ Support Regulations 2014, as well as the support offered to nuclear test veterans and their families by Veterans’ Affairs. Any civilian who is affected by any future use or testing of nuclear weapons overseas would be covered by public health care / social welfare, and may be covered by ACC in some circumstances (we are currently clarifying the extent of ACC assistance in that unlikely event).

The TPNW requirement that state parties must encourage other states to join it, with a view to achieving universality (Article 12), is a matter of policy rather than legislation – New Zealand’s support for the TPNW and for progressing nuclear disarmament more generally indicates that this requirement will be met.

The TPNW requirement that each state party shall adopt the necessary measures to implement its obligations under the Treaty (Article 5), is already met by the provisions outlined above.

Once the TPNW enters into force, state parties will be required to have safeguards in place (Article 3) but New Zealand is already fully compliant with International Atomic Energy Agency safeguards as it has both a Comprehensive Safeguards Agreement as well as an Additional Protocol in place.

Ratification of the TPNW is fully consistent with New Zealand’s existing international obligations – in particular, fulfilling the obligation on all state parties to the 1968 Treaty on the Non-Proliferation of Nuclear Weapons, which New Zealand ratified in 1969, “to pursue negotiations in good faith on effective measures relating to cessation of the nuclear arms race at an early date and to nuclear disarmament”(Article V1).

In addition to your own points, there are others you could include in your submission.

Ratification of the TPNW will ensure that New Zealand is a state party to all three of the instruments banning weapons of mass destruction – the other two are the 1972 Biological Weapons Convention, which was ratified in December 1972 (its provisions are included in the New Zealand Nuclear Free Zone, Disarmament and Arms Control Act), and the 1992 Chemical Weapons Convention, which was ratified in July 1996. It is in keeping with New Zealand’s ratification of treaties prohibiting other weapons with indiscriminate effects, such as the 1980 Convention on Certain Conventional Weapons and its Additional Protocols, the 1997 Mine Ban Treaty, and the 2008 Convention on Cluster Munitions; and other humanitarian disarmament treaties, such as the 2013 Arms Trade Treaty.

There is a high level of international interest in New Zealand’s ratification of the TPNW and early ratification will encourage other states to join the TPNW, as well as giving hope to the many NGOs and individuals around the world who are working for the elimination of nuclear weapons and promoting the TPNW with their respective governments.

Furthermore, early ratification will ensure that New Zealand is a state party to the TPNW when it enters into force, and will thus be in a strong position to influence the future development and direction of the TPNW at the first and subsequent Meetings of State Parties – the first will be convened within one year of the treaty entering into force.

Other points you could include in your submission are available in the National Interest Analysis (link below).

For further information, or any assistance with your submission, please contactiCAN Aotearoa New Zealand, email icanz@xtra.co.nz

· How to make a submission

Information on how to make a submission, what you need to know about making a submission, and the online submission facility, are available at https://www.parliament.nz/en/pb/sc/make-a-submission/document/52SCFD_SCF_ITE_78246/international-treaty-examination-of-the-treaty-on-the-prohibition

~ Links to the two international treaty examination documents – the National Interest Analysis on the Nuclear Weapon Prohibition Treaty, 16 May 2018, and a certified copy of the 2017 Treaty on the Prohibition of Nuclear Weapons – are available on the Parliament site at https://www.parliament.nz/en/pb/papers-presented/current-papers/document/PAP_78208/treaty-on-the-prohibition-of-nuclear-weapons-together

~ Links to the Treaty on the Prohibition of Nuclear Weapons text, the New Zealand Nuclear Free Zone, Disarmament and Arms Control Act 1987, the National Interest Analysis, and New Zealand’s statements and other documents related to the TPNW and the UN negotiating conference, are available on the iCAN Aotearoa New Zealand site at http://www.icanw.org.nz

~ This formatted edition of this guide is available on the iCAN Aotearoa New Zealand site at http://www.icanw.org.nz and on Facebook at https://www.facebook.com/notes/peace-movement-aotearoa/nuclear-ban-treaty-key-points-for-submissions/1711913112189384

· Consultation and thank you