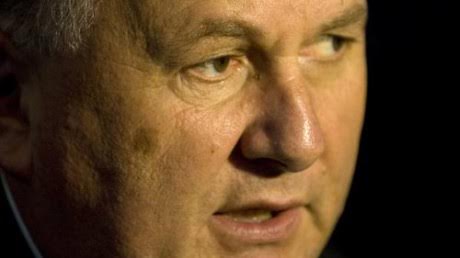 SHANE JONES is on to something. Whether it’s the thing I think he’s on to, or something else entirely, I don’t know. For the sake of argument, however, let’s just assume we’re both onto the same thing – and take it from there. And what is “the thing” we’re on to? The problem of bureaucratic obstructionism.

As Minister of Economic Development, Jones is appalled and frustrated by the time and effort required to get anything done in New Zealand. The Labour-NZ First coalition government has given him a billion dollars to kick our flagging regional economies into life. He wants to get cracking – but the bureaucratic obstacles in his path are holding him up.

He wants that to change. As an incoming minister in a new government, he wants to be able replace the incumbent bureaucratic bosses with his own people. That way, the enormous power conferred upon the Crown’s CEO’s by the State Services Act could be harnessed to the core democratic duty of making his party’s election promises come true.

In theory, this is precisely what is supposed to happen under the existing system. Government ministers inform their CEO’s as to what is expected of them – policy wise – and it is then their job to make sure the policy is carried out. Between the communication and the execution of the policy, however, a Minister’s bureaucratic advisers are expected to offer “free and frank advice” as to whether the measures being proposed are practical, affordable or even desirable. When that discussion ends, however, the responsibility for actually implementing the agreed policy rests almost entirely with the CEO – not the minister.

Herein lies the problem. A minister can lead his bureaucratic horses to water, but he cannot make them drink. While the CEOs and all the bureaucrats under them are deemed to be acting as their ministers’ “agents”, the ministers – their “principals” – are expected to let them get on with it. Direct interference by politicians in the day-to-day implementation of government policy is a big no-no.

Couldn’t the minister just cajole, or even threaten, his bureaucrats into doing his bidding behind the scenes? Well, yes, he could try. Unfortunately, that sort of behaviour has a habit of being leaked to the news media. Before the minister knows it, the State Services Commissioner is being asked to investigate, and the minister is being asked by the prime-minister to giver her one good reason why she shouldn’t ask him to surrender his ministerial warrant immediately.

The news media can also come in very handy in the event of a minister point-blank refusing to accept the “free and frank” advice of his bureaucrats. The fact that a minister’s “expert advisers” have unanimously pronounced his policies to be impractical, unaffordable and undesirable – only to be ignored – will always be front-page news. Especially when the details of that official advice are helpfully released to a TV network under the Official Information Act, or passed to a press gallery journalist in a plain brown envelope.

How can this be democratic? Surely, if a political party, or parties, are elected on the basis of a particular set of economic and social policies, then the sort of bureaucratic obstructionism (or outright subversion) described above can only be described as running completely counter to the government’s democratic mandate?

The sad answer to these politically charged questions is that the executive arm of the New Zealand state is not designed to serve democracy – but to thwart it. It was reconfigured in the 1980s to make sure that the way the populist National Party prime minister, Rob Muldoon, governed New Zealand could never be replicated.

As both Prime Minister and Finance Minister, Muldoon intervened directly and repeatedly in the country’s economy. He froze wages and prices and fixed rents and interest rates. He committed the country to “Think Big”, a vast programme of public works and joint-venture energy projects. The strong objections of Muldoon’s bureaucratic advisers – particularly those in the Treasury – were brusquely overruled. The whole point of the State Sector Act was to sever the cables that had connected the levers in Muldoon’s hands to the big economic and administrative engines powering post-war New Zealand.

That this frankly undemocratic system has functioned more-or-less effectively for so long is due to the acceptance by all but one of the country’s major political parties that a return to the bad old days of “Muldoonism” would be disastrous for New Zealand. The odd party out is, of course, NZ First – whose leader, Winston Peters (another populist) has always been a great admirer of Rob Muldoon.

If you have ever wondered why Peters attracts so much venom from practically the entire political class: politicians, journalists, civil servants and business lobbyists; it’s because they understand that any politician who pledges to fulfil his party’s promises by reintroducing a “hands-on” approach to economic management cannot avoid exposing the undemocratic coding at the core of government management in New Zealand.

Now, it may be that Shane Jones simply fancies himself as an economic czar surrounded by cronies and flunkies who treat his word as law. And that, I’m prepared to concede, is a profoundly disturbing picture! More likely, however, is that Jones is lashing out in frustration against a system specifically designed to thwart the promises and plans of populist politicians like himself and his leader.

I don’t believe it’s his ego that Jones is seeking to gratify – but the people’s will.