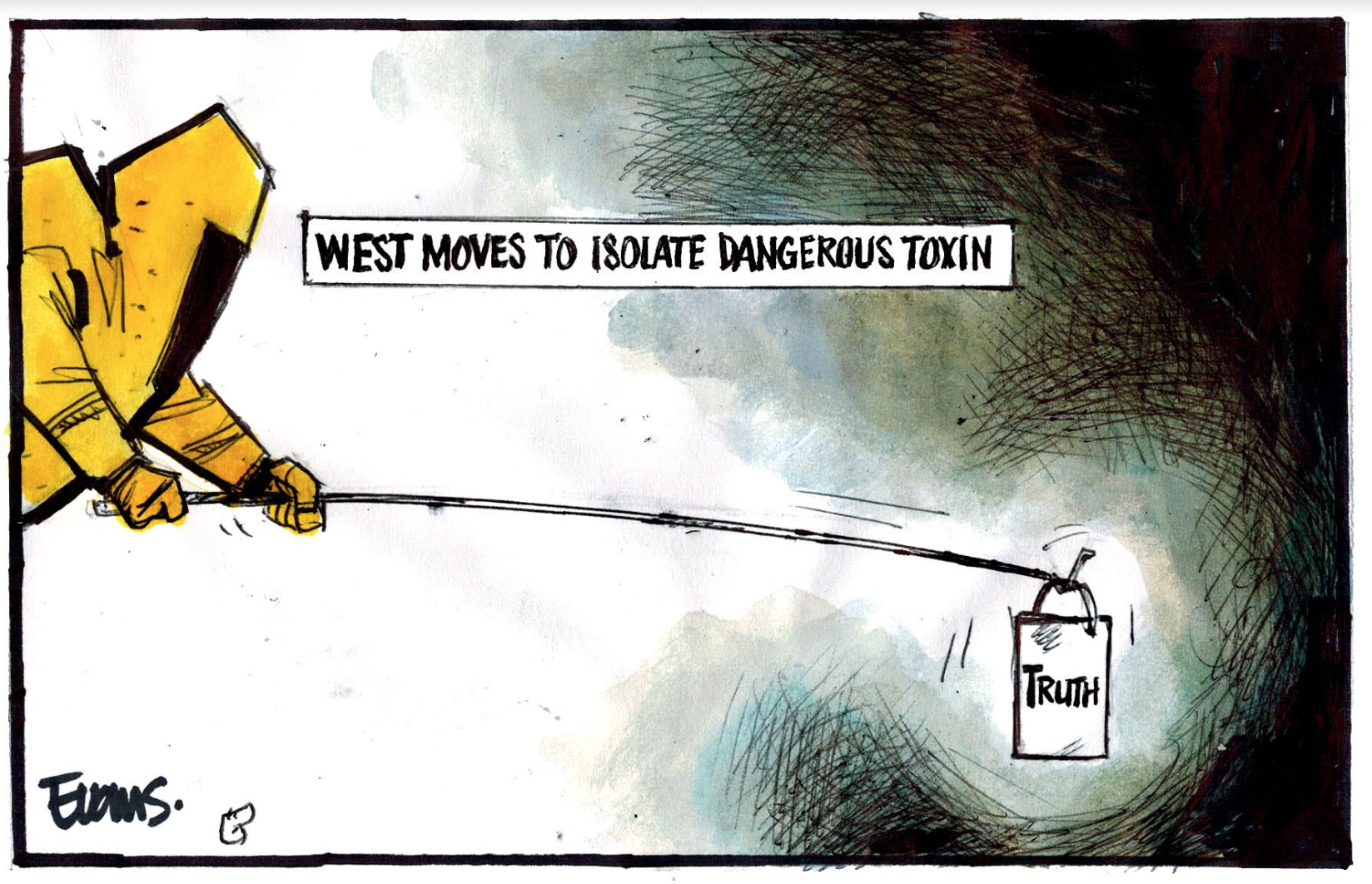 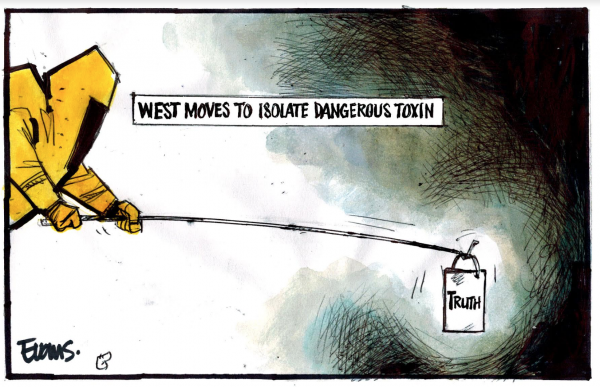 Australian journalist John Pilger says the Russian spy poisoning case is a carefully constructed drama. It certainly has all the elements, reminiscent of murder mystery, espionage, James Bond and Jason Bourne intrigues. It has the pretty young innocent victim, Yulia Skripal, daughter of an exiled Russian double agent, who has worked for Nike and PepsiCo. The agent himself, Sergei Skripal sold out his fellow spies for cash in the 1990s and 2000s, was sentenced to 13 years hard labour for his betrayal, was imprisoned in Russia but gained his freedom in the UK in a spy swap.

Yulia arrived in the UK to visit her dad, and after they enjoyed sushi in quiet Salisbury, they collapsed on a park bench, frothing at the mouth, vomiting, eyes staring blankly white. Russian President Vladimir Putin has condemned traitors who sell Russian secrets and secret agents, and there’s quite some history of Russian journalists, critics and dissidents being assassinated at home and abroad. So the British government blames Russia and Russia predictably denies any role.

The British ruling party is outraged at this attack on ‘innocent civilians’ on its soil. And that outrage is shared by its allies. Russia was supposed to have given up its nerve gas stockpiles, as verified by the UN last September.

British Foreign Minister Boris Johnson and the Foreign Office originally claimed that technicians from the nearby chemical weapons lab, the ‘Porton Down Chemical Defence Establishment’ were unequivocal that the nerve gas used to poison the Skripals, came from Russia. This was part of the case presented by the UK to its allies, many of whom expelled diplomats and undeclared spies in a response of solidarity. But more recently those same lab technicians clarified that though the nerve agent comes from the Novichok military-grade chemical group developed by the Russians, they are unable to verify its precise source. The British government case has been weakened by this clarification and the British Labour leader Jeremy Corbyn accuses Boris Johnson of misleading the public.

The British government has literally stuck to its guns, rattling its military / diplomatic sabres, saying the information from Porton Down is only part of the intelligence picture which has led them to hold Russia responsible. They maintain that the source of the Novichok was a Russian military research base, Shikhany, the equivalent of Porton Down. Small stockpiles of Novichok have been retained by Russia, they allege, despite the UN Convention Against Chemical Weapons, for targeted assassination killing. The US on the other hand, retains some of its original chemical weapons, and Porton Down itself has been the base for controversial chemical weapon development for decades.

Besides, allege the British, that ‘the Russians did it’ is the most plausible explanation. “No other country has the combination of the capability, the intent, and the motive”. Boris Johnson says Putin is overwhelmingly likely to have ordered the attack on the Skripals. But anyway, the western narrative goes, ‘Russia deserves the opprobrium, the resulting sanctions and international condemnation – not only are they ‘inevitably’ behind the nerve agent attack on the Skripals, but they’ve invaded the Crimea and the Ukraine, they obstructed investigations into the downing of MH11, Putin is corrupt (he just won another election – he must be!), the Russians interfered with American electoral politics, they support Syrian leader Assad, and everyone else is with us, so we must be right’.

Russia is having no stock with these allegations. They’d like to see a sample of the agent to confirm its origins themselves. They’d like to be party to the inquiry into the source of the Novichok. They point out that there’s no patent on Novichok so theoretically it could have come from a range of different places – countries where ex-Russian scientists are now working. Putin says the resulting British and EU sanctions, NATO reaction, diplomatic expulsions, are part of an anti-Russia campaign. Sergei Lavrov, Russian Foreign Minister says the poisoning is in the interests of the UK – a distraction that has been unifying Western Europe while Brexit threatens to divide it. It’s a propaganda war, ‘the theatre of the absurd’ according to Russian politicians.

British Prime Minister Theresa May rebukes the Russians for treating the situation in a light-hearted manner. She says Russia’s response has been one of sarcasm, contempt and defiance, and has failed to provide any credible explanation of how Novichok made its way to afflict the Srkipals.

In turn the Russians say the UK has provided no tangible evidence to show the alleged Novichok came from the Russian state. It could have been a false flag assassination attempt to show Russia in a bad light; “couldn’t they come up with a better story?” “Why would Russia eliminate someone using a dangerous and highly public method” when there are a million ways to murder someone in a less obvious way. Why would Russia even wait this long to attempt to kill Sergei Skripal – they could have killed him before he went to jail, in jail, or at any time since.

But as the New Statesman media source says, maybe it was a brazen attack to humiliate Britain on its own soil, an ostentatious message to both the West, and to Russian dissidents that Russia is unrestrained by usual conventions, and above domestic and international law.

Britain says firm action was required in response. ‘No sovereign state can tolerate the attempted murder of innocent civilians on its soil’. (No one deserves an assassination attempt but doesn’t Sergei Skripal’s role as a double agent blur the ‘innocent’ line a bit there?) The British UN ambassador said Russia was seeking to undermine the international institutions that have kept us safe since the Second World War. Australian Prime Minister Malcolm Turnbull repeated his country’s eagerness to jump on the bandwagon, saying the alleged Russian attack on the Skripals undermines international law and is an assault on the sovereignty of all nations that respect the rule of law. Foreign Minister Julie Bishop said the attack is a threat to the democratic world. There are fears that this stand off could lead to tensions worse than any since the Cold War.

So far, diplomatic expulsions and counter expulsions, sanctions and other actions have been more symbolic than really threatening to Russian security. Past sanctions arising from Russia’s military involvement in the Crimea and the Ukraine don’t seem to have a deterrent effect. Spies and diplomats have been kicked back home, the British Royal family won’t be going to the World Football Cup held in Russia, there are threats that assets used in weapons manufacture may be frozen, security checks on Russians will be increased, and a state invitation to Russian Foreign Minister Sergei Lavrov, has been retracted.

Meanwhile, New Zealand is the only member of the Five Eyes Security / Spy network that hasn’t expelled spies. “We don’t have any” said Prime Minister Jacinda Ardern, though security expert Dr Paul Buchanan says, that’s either ‘diplomatic, disingenuous or naïve’ – or, they’re very good at being covert spies. New Zealand has been criticised for being less than eager in joining the rest of the western world lining up to condemn the Russians for their alleged attack on the Skripals.

I prefer to live in a country that makes its international relations decisions based on firm, independent evidence rather than speculation. Let’s not forget the rush to war based on allegations of Weapons of Mass Destruction. It doesn’t have to be ‘you’re either with us or you’re against us’, it can be a case of wait and see – at least until Wednesday when the UN Organisation for the Prohibition of Chemical Weapons releases its report into the incident.

I find it hard to feel sympathy for Sergei Skripal. Though I have no sympathy for Russian imperialism, I have no sympathy for British or American imperialism either. Considering proportionality, the death of innocents, matters of sovereignty and global security, I’m more concerned that so called civilised countries of the world would express similar outrage at atrocities committed in Palestine, Yemen and Syria, to hundreds of thousands of truly innocents, to ancient cultures, to the places they live and to their very survival. The case of the poisoned Russian spy seems a distraction from, and a symptom of, bigger geopolitical fights, a microcosm of more serious dramas on the global stage.