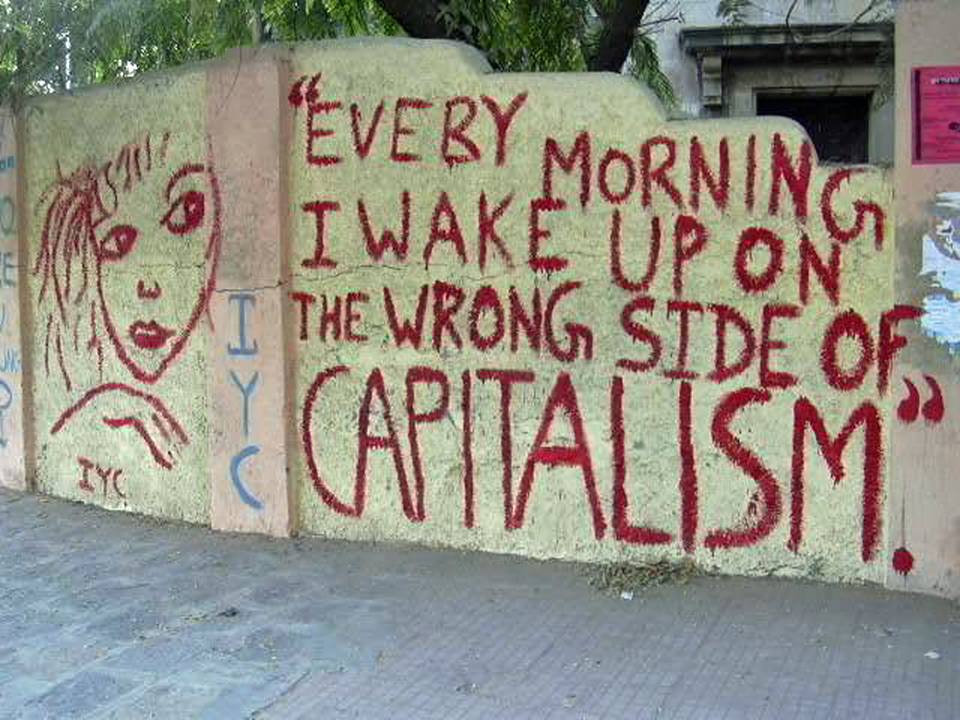 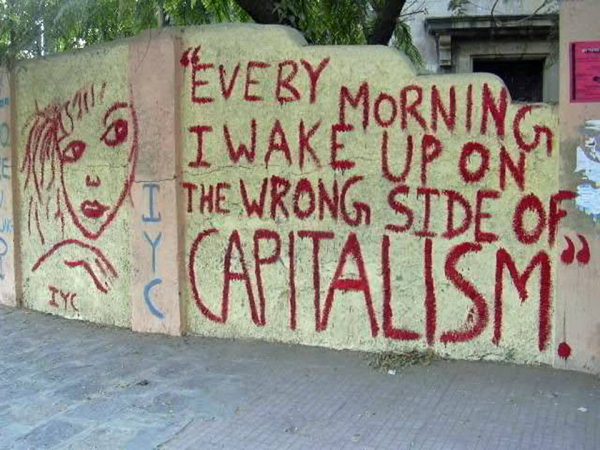 While we don’t use the c-word ‘capitalism’ much these days, Winston Peters created a bit of a stir by mentioning it in his coalition announcement speech. And former Green MP Catherine Delahunty, on Backbenchers (television), said that we must address it. These days we sometimes prefer the putative synonym ‘globalisation’ when we want to make an ideological point about the capitalism that many ‘progressives’ see as driving us to economic, social and ecological ruin.

While part of the reason we relegate ‘capitalism’ to the shadows is a lack of literacy in and interest in political economy, the bigger issue relates to the absence of history in far too much of our thinking. Indeed, the word ‘globalisation’ is commonly used to talk about ‘now’, with a sense of history going back no further than the 1980s.

Capitalism is one of the biggest – it not the biggest – ism of human history. It’s a reality, not a policy. Nobody in the year 1300 said, “lets revolt against feudalism and replace it with capitalism”. Capitalism was an outcome made possible only by a Malthusian event – the Black Death of the mid-fourteenth century – so large that the fundamental relationships between classes of people (in Europe especially) were splintered. Enough social and economic space was created for a new ism to quickly evolve in place of feudalism.

Karl Marx’s nineteenth century analysis was about capitalism, its evolutionary success, and its internal contradictions. His analysis was largely a development of the classical economics (c.1810s) of David Ricardo (in the history of economics, Marx is widely understood as a post-Ricardian) and James Mill (father of John Stuart Mill). Classical economics is itself a development of the classical liberalism of John Locke (c.1690s) and the economic liberalism of Adam Smith (c.1770s). While Marx did mention a benign post-capitalist order – he called it ‘communism’ – he understood that it could only arise from the collapse (indeed, realistically, the Malthusian collapse) of capitalism. And he presumably understood that benign communism was only one of a number of possible unknown isms that might arise beyond the collapse of capitalism.

(We might note that not only are we just a few months away the bicentenary of Marx’s birth; this year is the bicentenary of the publication of the most historically significant – though not the most popular – economic tract ever published, Ricardo’s ‘On the Principles of Political Economy and Taxation’.)

There are alternative non-Marxian ways of critiquing capitalism, or what we think of as capitalism.

What we have today, and have had in various iterations since at least the time of John Locke, is semi‑capitalism or skewed capitalism, a stunted version of capitalism succoured by the ignorant rich because it skews the income distribution in their favour.

What political progressives need to be doing is opposing semi-capitalism, in favour of a fully-rounded capitalism: productive, efficient, equitable and environmentally sustainable (the four goals). For capitalism itself to be sustainable, it needs a mechanism to stabilise income distribution (probably at a ‘Gini coefficient’ for income of around 0.30 [30%], much like New Zealand’s income distribution in the 1970s). We need a capitalism with a thermostat set at ‘Gini-30’.

In addition to the familiar global market mechanism – which could maintain economic efficiency (one of the four goals) if we lived in a Gini-30 world – we need a capitalism that builds into its core the important but very distinct concepts of public debt and public equity.

Private businesses and households – taken collectively and globally – always spend less than they earn. They always have and they always will, notwithstanding the converse of this in post-1980s’ New Zealand history. This universal practice of precautionary saving is better understood as an insurance premium than as a nest-egg to be spent at an end-of-life party. By definition (given that, in the private-public dichotomy, there are only two sectors) the only way this private‑surplus habit can be accommodated is through public sector financial deficits. And public financial deficits accumulate as public debt. Public debt is utterly central to functioning capitalism, because public financial deficits offset private financial surpluses. If both private and public sectors are genuinely trying to run financial surpluses at the same time, the only logical conclusion is the complete collapse of capitalism. It’s a mass‑casualty financial race to the bottom.

It is modern Japan that has pioneered the use of public debt as a stabilising force that broadens semi‑capitalism. The Japanese public prefer to lend to their government – at zero interest rates (with the shared understanding that individuals will only withdraw these savings in the same context as if making an insurance claim) – than to pay increased taxes.

Public equity is the crucial component of the Gini-30 thermostat. We can think of the economic pie as being divided into two substantial portions (‘halves’, but not exact halves). One half represents the fruits of private equity – labour and private capital. The other half represents public equity.

We are slowly – and very stutteringly – developing ideas of private equity. I saw this article in the New Zealand Herald on 14 December (Robertson walking tightrope between paying for policy and controlling debt) in which four [sic] or five capitals are being promoted by the New Zealand Treasury (no less) in “world-leading” research as the basis for future prosperity. These capitals are not news to me.

Twenty years ago I published A New Fiscal Contract? Constructing a Universal Basic Income and a

Social Wage (Social Policy Journal of New Zealand). Last week I published, for the AUT Policy Observatory, the report Public Equity and Tax-Benefit Reform in which I explicitly referred to the ‘Six Capitals’ of Jane Gleeson-White’s 2014 book Six Capitals, or Can Accountants Save the Planet?. Of these six capitals, three – natural, intellectual, socio-cultural – are inherently public. The remaining three capitals – human, manufactured, financial – each have substantial public domain components (education, physical infrastructure, monetary/banking system including central banks such as New Zealand’s Reserve Bank).

This preponderance of public capital means that one ‘half’ of the economic pie – alternatively understood as ‘output’ (GDP) or ‘income’ – is inherently public income. Our main task is to account for this public half as if it was available for public distribution. However, we should not be trying to measure the unmeasurable.

(On the matter of measurement-mania, there are two cynical ways to reduce a country’s poverty metrics: 1. Give people trapped just below the poverty-line a few dollars more so that they are trapped just above the poverty line; 2. Reduce the median income [ie increase inequality] so that more poor people come within 60 percent of that median.)

What capitalism needs is a public income pool that complements the private income portion. If the Gini coefficient is above 0.30, then the public income pool is too small (meaning the private ‘half’ of GDP is relatively too large). This would mean that the government is levying too little as income tax, and distributing too little income from the public pool. The appropriate remedy of democratic capitalism would be for the people’s representatives to levy more, and to distribute more. Conversely, if the Gini coefficient is below 0.30, then the public pool is too large; the income tax rate should be cut and public equity dividends reduced in favour of higher private after-tax incomes.

We can see here that public equity acts as a systemic thermostat to regulate income distribution at around the desired Gini setting. This is the requirement that can make capitalism sustainable. In doing so, it can allow individuals to manage their hours of labour (ie hours committed to the marketplace). Individuals, by choosing to work fewer hours would reduce the private components of their incomes. If large numbers of people choose to work fewer hours – and this is not matched by other people choosing to work more hours – then the economic pie would shrink (possibly, but not necessarily, a bad thing) and the public income pool would reduce markedly. This would in turn cause more people to revise upwards their commitments to the labour market.

Full democratic capitalism extends our present Pigovian semi-capitalism through its acceptance of both public debt and public equity as means to remove semi‑capitalism’s ultimately fatal skew. Do we try to bring forward a Malthusian resolution that will lead to some other ism replacing semi‑capitalism? Or should political progressives seek to build a full-bodied sustainable capitalism that recognises the relationship between capitalism’s private and public domains?