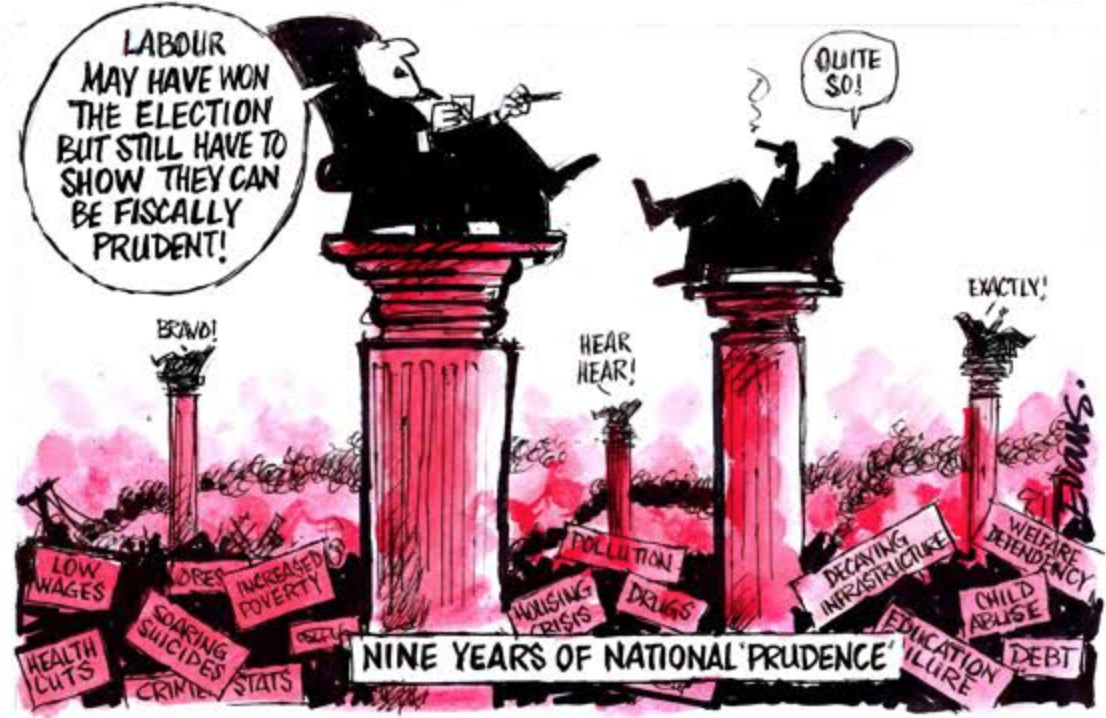 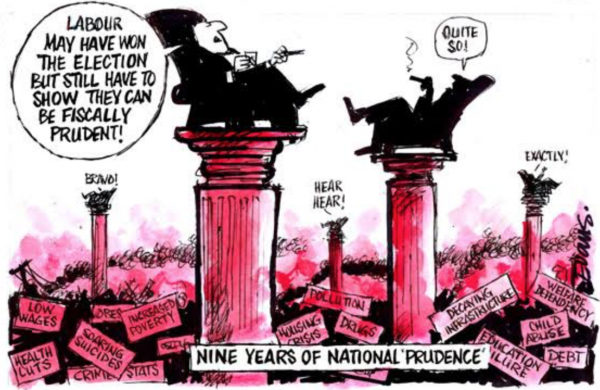 It’s like politicians have suddenly been given permission to call out capitalism for its injustices, excesses, and inequalities. Winston Peters said what others had been scared to say, that capitalism has created many who see it as foe rather than friend, and they’re ‘not all wrong’. He criticised ‘irresponsible’ neo-liberal capitalism which has changed the character and quality of our country, mostly ‘for the worse’. He argued that capitalism must regain its responsible, humane face, I guess to prevent political crisis when the anticipated economic crisis occurs. In choosing Labour as a coalition partner over National, New Zealand First ‘rejected the status quo in favour of real change’. But how much can improving the ‘face’ of capitalism, solve the more fundamental problems of the system itself. And how radical are the new government’s reform policies anyway? Media commentators have had a field day speculating on the degree and impact of the new Government’s reformist agenda in the midst of this rare political opportunity.

Oliver Chan in his article ‘Keynsianism for a new New Zealand’, calls the government’s change programme ‘aspirational socialism’. He said Labour and New Zealand First are the ‘bipartisan gravediggers for neoliberalism’. Media across the ditch and farmers in Morrinsville mistook Labour’s policies for communism. Duncan Garner said the new government with its regional development policies, support for rail, cannabis reform and free education, would be a ‘revolutionary force’.

Others such as Bryan Gould and Bryce Edwards say the election of a progressive, reformist, energetic and active government, reflects a global zeitgeist, and has captured and channelled anti-establishment politics in a more positive way than in, for example, the election of Trump in the United States. Democratic politics and MMP have worked well, in harnessing political opposition to the machinery of the status quo to affect legitimate and peaceful ways of mediating controlled change. Political outcomes are highly contingent, and unfortunately change has been rather slow to get here and a lot of damage has been done in the meantime.

In support of Jacinda Ardern, Wayne Mapp, former National MP, said the new government won’t really be radical. -After all it will continue to work within the current national and international economic frameworks, surpluses will be maintained, budget responsibility will be upheld. Spending will be transparent and accountable. There will be no dismantling of the capitalist system at the hands of this government, despite criticisms of some of its effects. But what will be most important, said Wayne Mapp, is the signal it sends in terms of ‘atmospherics’. That will ‘really mean something.”. “It’s a chance to remake the narrative of the country, …the way we portray ourselves to the world”. Indeed, our election of a young woman as Prime Minister has already done that.

Winston’s criticism of capitalism in the speech where he announced his choice of coalition partner, did a lot to position his party, and the new Government he enabled, more to the symbolic left of centre than had been present for a long time.

On the tv programme The Nation, the next day, Jacinda Ardern, in one of her ‘most left wing speeches’ according to Bryce Edwards, answered Lisa Owen’s inquiry as to whether she agreed with Winston’s prognosis. She said while the party campaigned on addressing capitalism’s failures by ‘tweaking’ the system, her view was that capitalism had been a blatant failure when measured by child poverty. And that “If you have hundreds of thousands of children living in homes without enough to survive, that’s a blatant failure. What else could you describe it as?”

But with Winston’s proclamation, and Jacinda’s elucidation, all of a sudden it’s ok to admit the Emperor’s clothes are a poor fit, that they fail to cover the regime’s inadequacies, its indecencies, the harms it causes in private.

We’re on a roll, with more in the new government’s due criticism of capitalism. This week, Trade Minister David Parker said that the proposed ban on non-resident foreign investors buying existing houses in New Zealand, was to address the pressures of the ‘excesses of capitalism’ in the form of the overseas 1% who can currently come in to this country and buy houses, driving up prices for good kiwi buyers.

The policy itself has been criticised as an ill directed, (xenophobic) dog whistle against perceived ‘others’, which may not make much difference to house price inflation, because it’s not matched with a capital gains tax, doesn’t apply to new builds, doesn’t apply to businesses, and the focus of the policy only creates between 5 and 20% of housing demand anyway.

While speculative investment from foreign buyers might be causing a part of the house price inflation, it’s clear that most of the demand is driven by domestic investors and speculators, our own 1% who remain unaffected by this policy. There are clearly thousands of kiwis who had the good luck of access to a low but growing housing market and cheap interest rates to buy a collection of houses, all rented out, with interest and costs claimed against tax. Kiwis who responded to market signals and bought two, three, twenty houses to guard against their old age penury, but without regard to the housing insecurity of others. Criticisms of the global 1% buying existing houses in New Zealand, and current and planned policy settings, do nothing to address the impacts of our own 1%. After all, this sector of the community vote, and have a lot at stake, and we saw in the polls how the prospect of a capital gains tax could make all the difference to the outcome of the election. Despite the enthusiasm for a compassionate and empathetic governance style, self-interest and personal economic security for those who can get it, is a pretty strong force, even if it cuts others including the next generation, out of the market.

Can capitalism really deliver solutions to the problems it creates anyway, without causing worse injustice, if not here, then somewhere else in the world as our local achievements are offset by costs in some poorer country? Joven’s paradox says we can’t use green growth to build our way out of environmental damage, without creating more. We can’t grow ourselves out of finite resources and inequality using the model that created these problems in the first place. And with a duly expected economic slow-down or collapse, aren’t we just trying to secure the safety net and batten the hatches for more of what, for many, is an already bumpy ride? In our welfare system, accommodation allowance, working for families, planned heating subsidies, are we not just supporting the shortcomings of capitalism? Instead of regulated rent control, and companies paying decent wages, the government picks up the pieces. As usual isn’t the democratic system just effectively, co-opting real revolutionary energy and hitching it to the prevailing political order, ameliorating the worst effects of capitalism but doing little to change its wider instability or injustice?

Therein lies the dilemma. We New Zealanders, have responded to the capital incentives of a dynamic housing environment, but reject perceptions of ‘foreign’ involvement in the same. ‘Multiple home ownership should be the purview of kiwis, not ‘foreigners’.’ When it comes to the Trans Pacific Partnership, we all want access to immediate supply of the best – and worst- of the world’s consumer goods and commodities – exotic food, cheap clothing, cars, tvs, the latest international tech gadgets, international education, travel, …but we resent the damage from this global market on our own employment, investments and environment. We want international markets to deliver goods for our own consumption, and to buy our goods, but we resent our loss of jobs, the saturation of our markets and overseas investment in our own country at the same time. Just like capitalism privatises the benefits and socialises the costs, as consumers, we’re globalist when it comes to benefits and protectionist when it comes to costs.

Labour says it plans to ban foreign owners of new homes under the Overseas Investment Act to pre-empt the Trans Pacific Partnership rules, because it will otherwise lose the opportunity to ban foreign home ownership forever. That should be a concern in itself. Some critics think, however, that’s a red herring because of greater concern is the Investor States Disputes Settlement clause which undermines states’ sovereign rights to make policies in the interests of public or environmental health, at risk of being sued by corporations. Jacinda Ardern admits the ISDS provisions may not be changed.

But they’re hopeful days with the new government. With a three-party solution and the broad pick and mix of policies, there’s something there for every-one. In terms of ‘atmospherics’, there must be something in the air because most of us on the left are feeling pretty high. And while this may not be the radical root and branch revolutionary reform that capitalism really needs, a pulling out of a pretty but noxious vine, a good prune will always help to manage better growth and form. That’s in the interests of capital, and the community and keeps the vine bearing fruit and keeps the force alive while we strive for even better.