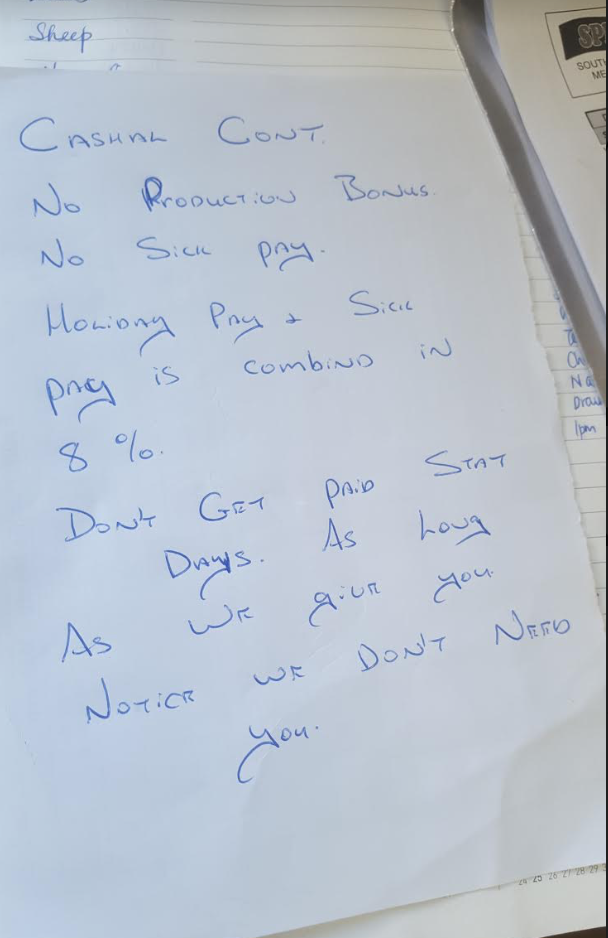 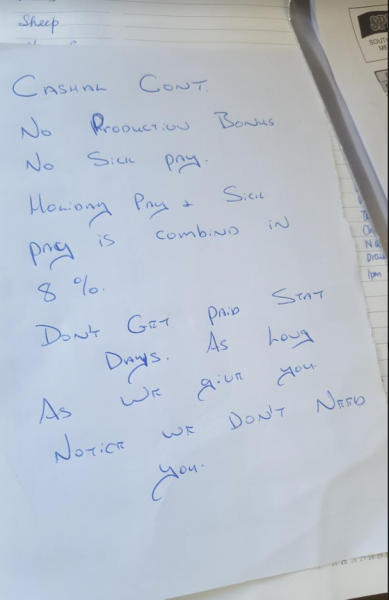 The photo is the speaking notes used by the management stooge who put the ultimatum to the workers last Friday. The worker that took the snap took an incredible risk doing so.

A Talley’s owned meat plant has given their workers an ultimatum; sign a new contract that includes an effective 85 cents per hour pay cut or be paid as a casual, with no sick days, no holidays, no production bonus and no rights of ongoing work. Oh, and no pay this Labour Day either.

The workers at South Pacific Meat’s Malvern plant near the Burnham army camp have been given to Friday to sign the inferior deal, but in the meantime, they have been told their current conditions have been taken from them anyway and they are now regarded as casual workers. The attached photo shows the speaking notes from the supervisor who announced SPM’s brutal approach to bargaining.

Workers at SPM enjoy an hourly rate of $14.60, well below the legal minimum. This was usually topped up with piece rates and an attendance bonus, paid outside the contract. The company has now taken away the attendance bonus ($2 per hour) and lifted the minimum hourly rate to $15.75. So, an actual cut of 85 cents.

This coercion is on top of the fact that the company already treats staff as fixed term casuals, laying them off every 3 months and only re-hiring those it likes. These so called ‘seasons’ are designed to exert power and control over the workforce, many of whom are migrant visa workers.

In completely unrelated news, Talleys have been among the largest donors to the National Party in recent elections, but not this year, apparently. I’m guessing that’s because the Nats have refused to promise even more draconian employment laws and the Talley family have spat the dummy at this rank subordination from their usually compliant political lackeys.

Instead, they are content to push the current law to its boundaries and, in many cases, over the line of decency. How are they getting away with this in the NZ of the Brighter Future (™)?

Simple. They win by flouting the law to keep the union out. SPM are happy to pay court costs, including a recent $28,000 fine for assaulting a union official, because they are saving thousands of dollars each week on the usual rates paid in the meat industry.

The Talley’s family find being bastards is very, very profitable.

2 Chain is the name of the road the plant is on. The Author wishes to be anonymous to protect themselves from Talley’s retribution.