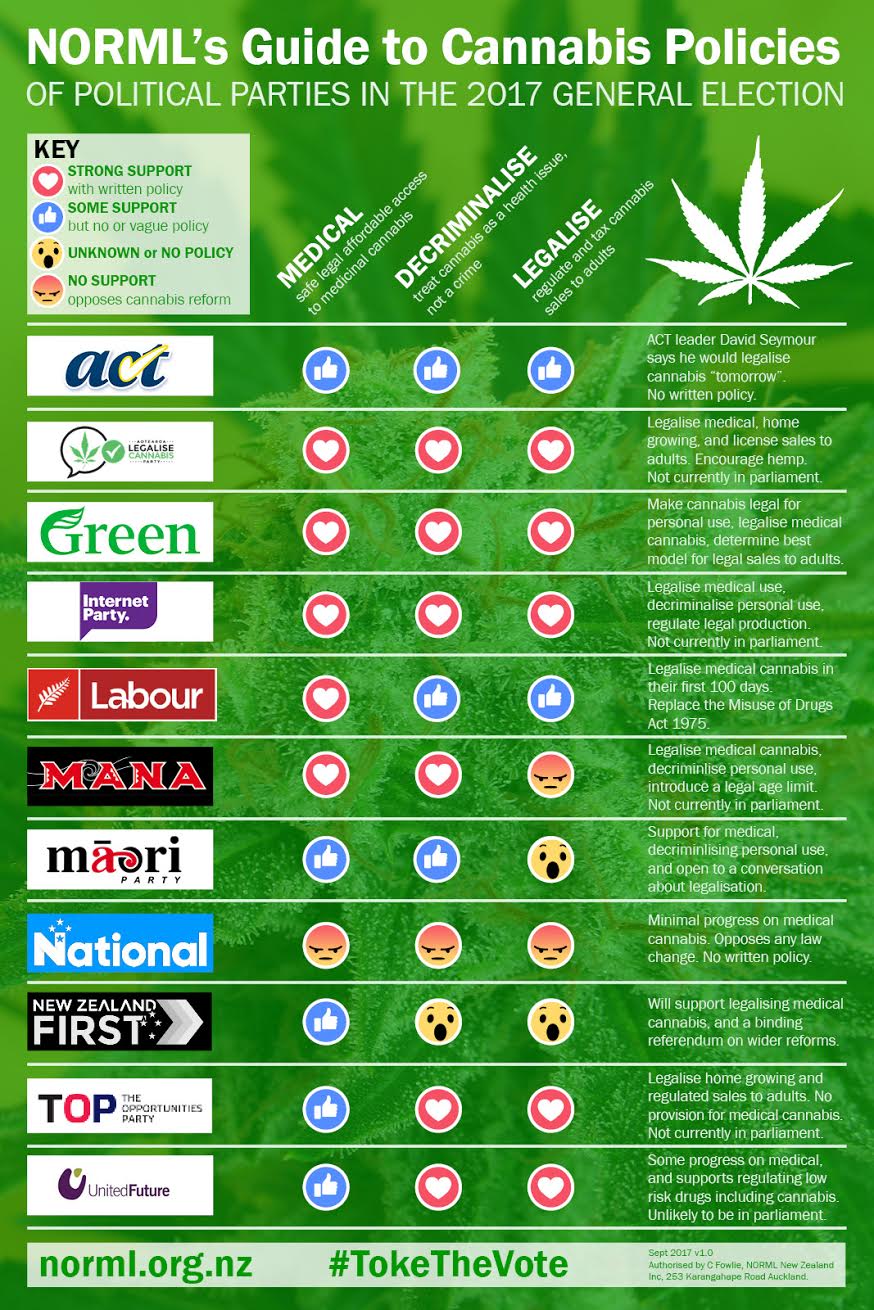 Cannabis is well and truly an election issue. For the first time ever, most parties now have written policies or have taken a stance supporting reform of some description. There is a lot to consider so to help we have assessed the cannabis policies or public statements of party leaders against NORML’s three core policies:

The Greens would make cannabis legal for personal use (including home growing), legalise medical cannabis and allow patients and caregivers to grow their own or be prescribed cannabis products, and use overseas experience to determine the best model for legal cannabis sales to adults. Green MP Julie Anne Genter has a medical cannabis bill before parliament.

The Internet Party’s cannabis policy is to legalise medical use, decriminalise personal use, and regulate legal production. Not currently in parliament.

Jacinda Ardern famously said “absolutely yes” to medical cannabis. Labour says it would legalise medical cannabis in their first 100 days. Labour policy is to treat cannabis as a health issue not a crime, and replace the Misuse of Drugs Act 1975. Labour MP Damien O’Connor has a medical cannabis bill before parliament.

Mana would legalise medical cannabis, decriminalise personal use, and introduce a legal age limit. Mana are opposed to legal sales to adults. Hone Harawira has called for dealers to be executed. Not currently in parliament.

In public statements the Maori Party say they support allowing medicinal cannabis and personal use, and are open to a conversation about legalisation. Their written policy only says Maori should be allowed access to emerging treatments including medical marijuana.

National has allowed only minimal progress on medical cannabis, and opposes any law change. Other than an election promise to “crack down” on gangs and drugs, it has no written policy. Cannabis arrests have halved under the Nats.

NZ First has no written policy but in public statements says it will support legalising medical cannabis, and a binding referendum on wider reforms. Wants a new offense of public intoxication.

TOP’s “Real Deal” cannabis policy would legalise use and growing up to 2 plants each, and regulated sales to adults through a system of non-profit clubs. However they have made no provision for medical cannabis, with leader Gareth Morgan calling it a “placebo”. Not currently in parliament.

Peter Dunne has made some progress on medical cannabis, and UF now supports regulating all low risk drugs including cannabis through the Psychoactive Substances Act. With Dunne retiring, UF are unlikely to make it back into parliament.

For more information see NORML’s website (https://norml.org.nz/2017/tokethevote-guide-to-the-2017-elections/) or search or site or social media using the hashtag #TokeTheVote. Stuff.co.nz, the New Zealand Herald, and Newshub have also produced guides to the cannabis polices of NZ political parties and candidates for the 2017 election – showing we really have made it an election issue.

Make sure you are enrolled to vote, and vote for parties and candidates who will change the law. 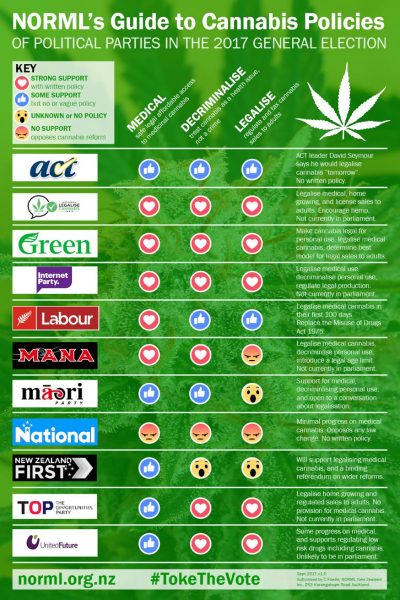