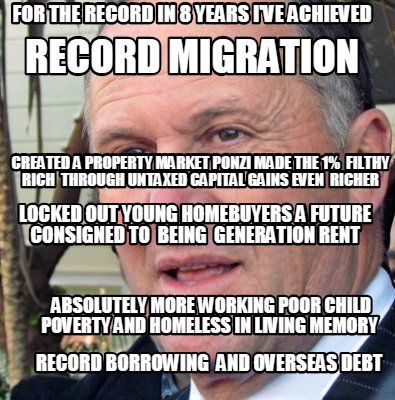 The National Government has done a great job at silencing criticism of immigration from the liberal-left.  Until recently any mention of concern over the deluge of migrants coming into the country under various guises has been greeted with claims that critics are zenophobic or even racist.  Thus the reactionary right in New Zealand First has been able to rattle the immigration cage by pointing out the volume of migrants we are receiving and the readily apparent truth that many of them don’t appear to be doing hugely skilled work.

It appears that the migration tap was opened up in late 2013. No justification or even an announcement was ever made- it simply happened.  It is difficult to believe that this spike is simply a policy miscalculation and not politically directed. Over the three years to 30 June 2016 New Zealand had net migration of 166,000 people compared with net migration of just 9000 people for the three years before that.  At least half this growth has been into Auckland which has of course exacerbated housing shortages and congestion in that city.

This sudden surge of immigration is due to two factors only one of which has been talked about by Government.  The most commonly offered explanation is that there are fewer New Zealanders leaving for Australia and elsewhere – as indeed happened.   Net migration of New Zealanders shrunk from an exodus of 101,000 people between 2010 and 2013 to just 21,000 between 2013 and 2016.  But at the same time the numbers of people from other countries grew from 110,000 between 2010 and 2013 to almost 187,000 between 2013 and 2016.  Arguable as fewer New Zealanders left for other countries the immigration tap should have been turned down a little – but inexplicitly the opposite occurred.

The National Government’s growth model has always been a three act circus with one act being a freak of nature and the other two being illusionists.  The Christchurch re-build unlocked tens of billions of insurance pay outs many from off shore thus generating economic growth and buoying up the whole economy. The dairy boom was never going to last but on any account it was facilitated by free access to water rights for corporate farmers and a licence to pollute with the lowering of a water quality standards.  The third illusion has been immigration into Auckland.

For the Government immigration is a boom.  It gets to clip the ticket on the resulting GST revenue from immigrants’ spending as they set up home and shop. But the costs are borne locally and particularly in Auckland.  Aucklanders pay these costs in increasing congestion and in higher rates and rents.  National Party supporters as home owners, property speculators, builders and landlords of course benefit from this growth and spending as well.

As the Christchurch rebuild was winding down and as the dairy prices collapsed the Government needed to ramp up immigration to keep people interested in their circus.  After all without solid economic growth of 2% to 3% annually Bill English will struggle to balance the books and find the $600 million he needs each year to fund John Key’s superannuation pledge.  It doesn’t matter that the economic growth isn’t sustainable or even sensible we only need to get to the next election.

But the real costs of this growth model are felt by the young and the vulnerable.  In particular, by young workers on the margin of the job market and by renters.

There is strong evidence that younger workers are finding it tough in the present labour market and some of this evidence is presented in The Salvation Army’s recent report on youth unemployment.  For example over the past ten years the New Zealand economy generated a credible 280,000 jobs yet employment amongst the 15 to 24 year olds grew by a mere 8000 jobs.  This has meant that the 15 to 24 year old NEETs (those not in employment education and training) have remained at around 75,000 people since the GFC.

One of the reasons for this is that many of these new jobs have been taken by recent migrants – especially over the past three years.  Since 2013 the so-called working age population has grown by more than 200,000 people and perhaps as much as 80% of this growth has been through migration.  Over the past three years approved student visas totalled 71,423 where as for the three years from 2010 to 2013 there were 43,731 visas approved.

It is quite wrong to make immigrants the scapegoats for persistent youth unemployment. They have come here seeking opportunity and good for them.  But it is also quite wrong to ignore the impacts of immigration on housing and labour markets for fear of appearing xenophobic or mean spirited.  This sells short those at the bottom of these markets but then these people have never been of that much interest to the urban liberals who dominate policy and media circles.  It is so much better to focus on such things as diversity and the rich variety of restaurants we can visit – some of which no doubt readily exploit migrant labour.

It is quite reasonable to pitch some blame toward immigration policy and the fact that it has paid little or no regard to the impact of migration on local labour markets. For example of the 209,000 work visa applications approved for the 12 months to June 2016, just one third of applicants had a prior job offer and for just 13% of these approvals was any prior labour market check recorded.

New Zealand like all western countries has an aging population.  Every week 900 New Zealanders reach the nominal retirement age of 65 and this will continue for the next 15 years or so.  However employment amongst those aged over 65 has expanded by 50% over the past five years or by over 50,000 workers.  While this growth in numbers may continue for a few years yet, it will eventually taper leaving New Zealand with potential labour shortages.  Clearly the inclusion of every younger person in the job market is an essential response to these shortages but we will also need to rely on migration if we want a growing economy.

The immigration debate risks turning into a reactionary, petty spectacle if we don’t insist that it be undertaken rationally and inclusively.  In such an inclusive debate we need to consider the interests of every New Zealander including the young as well as those who have arrived recently.  There has been no such debate to date because the Government has simply and quietly met employer demands for more compliant and sometimes desperate workers whom they can pay and treat poorly.  Such a ploy was never going to end well and we all deserve better.