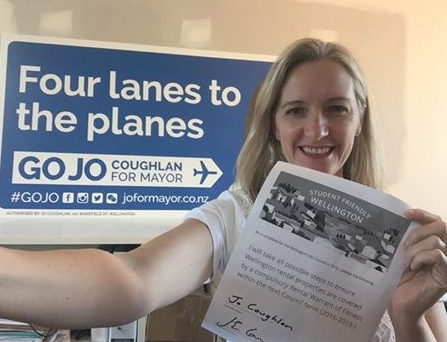 Coughlan has been a city councillor since 2007, as well as Director for PR firm, Silvereye Communications. Amongst her PR company’s clients are the Ministry for Education, Energy Efficiency Conservation Authority (EECA), Department of Building and Housing, NZ Post, and ACC.

As well as a Director to Silvereye Communications, Coughlan is (was?) a Director of Life Flight Trust – which also happens to be a client of the same PR company.

From 1996 to 1999, she was  Press Secretary  for then-Foreign Affairs Minister, Don McKinnon.

On 2 April this year, Coughlan announced her intentions to run for the Wellington mayoralty. She also declared her support for a four land highway to Wellington’s international airport, located in the eastern suburns;

“We need to double-tunnel the Terrace and Mt Victoria tunnels and see four lanes along Ruahine St to the airport. Wellington’s mayor must lead on this, and that is my commitment.” – Jo Coughlan, 2 April 2016

Coughlan linked expanding the roading network with electric cars, even though currently there are only about 150 of the vehicles in the region.

There is no other  mention of public transport, except  in relation to “fixing our roads“, in any of  Coughlan’s other election material (seen by this blogger). Her website also makes only a brief reference to “public transport options”.

Coughlan replied the same day and in an email said;

That way you essentially get (Inc the one way systems ) four lanes  to the planes.”

Since initial contact, Coughlan’s “happy to discuss” response has been met with evasiveness to pin down and arrange a time for a series of questions to be put to her. Requests for a set time to put eleven questions, plus follow-ups, have been ducked. (Which raises questions about her role in  the communications industry.)

The questions which merited answers were;

It is well known that building more roads attracts more cars. In one year alone, 43,000 more cars have been added to Auckland’s congested roads;

There are 43,000 more cars on Auckland’s roads than this time last year, with nearly 11,000 of those vehicles registered in January alone.

“You’re reaching a point where you can’t add any more traffic to the Harbour Bridge,” Pant said.

It is unclear how more roads would “make public transport more reliable“.

Q2: In pamphlet, you stated, “We need roads that keep us moving. Electric cars need roads”? What do you say to those who say it is disingenuous to link environmentally-clean electric cars with the building of more roads?

With only 150 electric vehicles in Wellington, there seemed no apparent need to build more roads at a cost of billions, for such a small, insignificant number of alternative-fuel cars.

The possibility exists that Ms Coughlan was being willfully disingenuous, and attempting to “green wash” an environmentally unfriendly policy.Was that Coughlan’s intention?

Q3: Along with your advocating for a four-lane motorway from Transmission Gully to the airport, you’ve stated you want to “work with Government to accelerate building of the city’s infrastructure and roading to keep the city moving”. Bearing in mind that the planet’s temperature continues to rise according to latest data from NASA and the US National Oceanic and Atmospheric Administration (NOAA), and also bearing in mind that fossil fuels like oil and petrol are prime producers of greenhouse gases, isn’t a four-lane motorway of the kind you are suggesting irresponsible?

Coughlan attempted to mitigate her support for building more roads by stating on her election “pledge” card that she would “protect the greenbelt and natural environment”;

However, nowhere in her election material does Coughlan refer to the effects of climate change on our natural environment.

Expanding on the previous question, I wanted to put to Coughlan the following;

Q4: Are you aware of NASA’s latest findings that ” the six-month period from January to June was also the planet’s warmest half-year on record, with an average temperature 1.°C warmer than the late nineteenth century”; that “Arctic sea ice at the peak of the summer melt season now typically covers 40% less area than it did in the late 1970s and early 1980s” and that “Arctic sea ice extent in September, the seasonal low point in the annual cycle, has been declining at a rate of 13.4% per decade”?

Q5: Are you aware that the NOAA recently confirmed NASA’s data, stating, “The average global temperature across land surfaces was 2.33°C above the 20th century average of 3.2°C, the highest March temperature on record, surpassing the previous March record set in 2008 by 0.43°C and surpassing the all-time single-month record set last month by 0.02°C”?
More specifically, the NOAA reported that “New Zealand reported its sixth warmest March in a period of record that dates to 1909, at 1.3°C above the 1981–2010 average. The entire country had above or well-above average temperatures for the month. Parts of Northland, Waikato, Manawatu-Whanganui, and Westland were each more than 2.0°C above their March average”. What is your comment on those latest findings?

New Zealand is not immune to climate change effects as mentioned in this CNN report;

The first six months of 2016 were the hottest ever recorded, NASA announced on Tuesday, while Arctic sea ice now covers 40% less of the Earth than it did just 30 years ago.

Temperatures were on average 1.3 degrees Celsius (2.4 degrees Fahrenheit) higher than average between January and June this year, compared to the late nineteenth century.
In total, the planet has now had 14 consecutive months of the hottest temperatures seen since records began in 1880, the U.S. National Oceanic and Atmospheric Administration (NOAA) said.
Australia, the United Kingdom, Hong Kong and Spain were some examples of places where temperatures soared more than a degree above average, as New Zealand had its hottest January to June period since records began.

The CNN report was based on the NOAA/NIWA findings, referring to New Zealand;

New Zealand reported its sixth warmest March in a period of record that dates to 1909, at 1.3°C (2.3°F) above the 1981–2010 average. The entire country had above or well-above average temperatures for the month. Parts of Northland, Waikato, Manawatu-Whanganui, and Westland were each more than 2.0°C (3.6°F) above their March average.

Was Coughlan aware of this latest information? She should be: it has been well document in recent local media.

The next question  underscored the critical impact  of climate change on our country,

Q6: To underline the effects of climate-change on our country, the Royal Society said in April this year,

“Changes expected to impact New Zealand include at least 30cm and possibly more than one metre of sea-level rise this century – the report finds it likely that the sea level rise around New Zealand will exceed the global average, which will cause coastal erosion and flooding, especially when combined with storm surges.

Professor James Renwick, Chair of the Expert Panel who wrote the report, warned; “Many New Zealanders live on the coast and two-thirds of us live in flood-prone areas so we are vulnerable to these projected changes.”
Professor Renwick warned that even small changes in average conditions can be associated with large changes in the frequency of extreme events, pointing out;

“With a 30cm rise in sea level, the current ‘1 in 100 year’ extreme sea event would be expected to occur once every year or so in many coastal regions. Along the Otago coast for example, the difference between a 2-year and 100-year storm surge is about 32cm of sea level.”

I then wanted to put a seemingly obvious question to Coughlan;

I also planned to ask Coughlan about a glaring omission from any of her election material;

Q8: Aside from your one statement linking “Fix our roads to make public transport more reliable” your election material makes no mention or reference to public transport. Why is that?

Coughlan put great weight on Wellington’s needs for the next one hundred years;

One has to admire Coughlan’s confidence in being a mayor for the next one hundred years.

Looking ahead for the next century is something that environmentalists and climate scientists are doing. The long-term effects of climate change on our planet are slowly building;

Which raises the key question as to where Coughlan’s long-term priorities lay;

Q9: Which is more pressing for Wellington’s needs for the next 100 years; taking action to reduce greenhouse gas emissions, or planning on more roading? Which would have greater priority fror you, if you were Mayor?

Q10: President Obama has said that “And no challenge — no challenge — poses a greater threat to future generations than climate change”. What is the responsibility of individuals to address this threat to our future?

Q11: What is your responsibility in this, Ms Coughlan?

It could be said that Ms Coughlan, as one person, has minimal effect on our increasingly violent weather patterns and rising sea-levels,  brought on by anthropogenic-induced global warming.

Throughout history, single people have been the instigators of momentous change and upheaval. Not always for good.

If Jo Coughlan were to become mayor – a distinct possibility based on the considerable amount of money spent on her election advertising – her plans to advocate for a four lane motorway would be instigating momentous change and consequential upheaval.

Coughlan’s evasiveness makes a mockery of her finger-pointing at other mayoral candidates. On 28 July Coughlan issued a press release accusing them of “hidden agendas”;

“However it is amazing that some candidates are not prepared to state clearly their real intention for standing and don’t seem to understand the STV voting system used in the Capital.

I am making it very clear that I am standing for the Mayoralty, not as a ward councillor and not to raise my profile for a tilt at parliament. I call on all other candidates to publicly state their real intentions.

So far we have a number of candidates standing with various agendas including increasing their chances of re-election to Council, election to parliament and even to gain profile to look at establishing a new centre-left political party.

Wellington voters deserve a Mayor who will lead the City and is 100% committed to running for the right reasons.

The other candidates need to come clean otherwise their intentions might seem a bit ‘murky’.”

Silvereye Communication: About Us

Scientific American: Earth Will Cross the Climate Danger Threshold by 2036

The White House: Remarks by the President in State of the Union Address | January 20, 2015

Scoop media: Coughlan says ‘I can win,’ accuses other candidates of hidden agendas