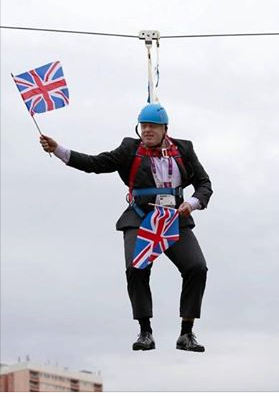 The Brexit referendum means many things, only one of which is a requirement for Grand Bretagne (Big Britain; as distinct from Bretagne, Brittany) to leave the European Union. Most important, the outcome was the political equivalent of a magnitude five earthquake. It may have forestalled the magnitude eight earthquake that was otherwise coming to a politically comatose Europe.

Indeed it may have been the beginning of the beginning of realignments of the United Kingdom, the European Union and the Euro Area. Here I will speculate, optimistically, on what these places may look like in 2050.

In 1975 I spent a winter week in staying in a cottage in the Isle of Man. It was beautiful but bleak. The TV coverage was from Belfast; Trouble with a capital ‘T’. Undaunted and young, a few months later I spent two weeks in Ireland – South and North – despite the reality that the United Kingdom was experiencing a civil war, and I was heading for the front line. It was confronting.

Northern Ireland Catholics voted almost to a man and woman to stay in the European Union. Protestants voted – by a narrower margin – to leave Europe. While culturally closer to Scotland than England – indeed the Presbyterian flavour of New Zealand’s culture owes much to Ulster as well as to Scotland – the loyalty of the Loyalists is towards London. I worry that the Troubles may return, with northern Catholics emboldened once again to push for a united Ireland, within the EU and Eurozone. Indeed the Republic of Ireland’s ‘beggar-thy-neighbour’ tax policies made its economic ‘optics’ rather good in 2015 (see my World’s most Prosperous Countries); Irish unity has its obvious attractions.

What is an outcome for Northern Ireland that can provide a long-term solution; a solution that the Ulster Presbyterians can embrace? I imagine (in 2050, say) a reformed Euro Area which includes Scotland, Northern Ireland, and the Republic of Ireland as constituent members. I can suggest Belgium as the precedent for a new Northern Ireland. Yes, as Chris Trotter recently noted, history can help us to see possibilities for the future. Belgium was once the Southern Netherlands. In the sixteenth century, the Northern Netherlands fought for (and won) their independence from their ‘papist’ Spanish oppressors. The south remained under the Spanish yoke, until that yoke withered. Today that South is part of a Benelux union within a union (Euro) within a union (EU). You would hardly know when you had crossed the border from Dutch-speaking Belgium (the north-western half) to Dutch-speaking Netherlands – from Flanders to Zeeland. The two Irelands can be separate and together, just as the two Netherlands are.

I see a greater Europe with three zones: a ‘Northern’-Euro Area; a ‘Southern’-Euro Area (Euro‑A and Euro‑B; together making up the EU), and a non‑Euro area. (Further, but outside the scope of this commentary, might be a fourth zone: Africa, with its long historical ties to Europe.) The non‑Euro countries would have close regional ties with the EU countries and with each other, on varying terms. Thus I would imagine Sweden and Denmark exiting the EU. Poland, on the other hand, might join Euro‑B.

Countries both in and out of the EU may form closer unions; for example Scandinavia (Norway, Sweden, Denmark, maybe Iceland), Benelux, Iberia (Spain, Portugal and Catalonia), Baltia (Finland, Estonia, Latvia, Lithuania) and Celtia (Scotland and the two Irelands; three nations, two symbols, the shamrock and the thistle). Some regions of France may even form close ties with Iberia (eg the Basque Region, and the people in the south who speak a tongue akin to Catalan) while remaining in France. We may see a loosening-up of the nation‑state‑system, which is what the formation of such unions enables.

(Indeed Europe has a precedent, the Holy Roman Empire, which historian Peter Wilson argues was Neither Holy nor a Failure, nor Roman for that matter. Not even an empire, in the nationalistic sense that we normally think of empires.)

Within the EU, countries in the Euro‑A zone would be free to devalue and join Euro‑B. And countries in Euro‑B running trade surpluses could raise their living standards by joining Euro‑A, effectively a currency revaluation. The rigidity of the Euro system will have been eased, while its underlying integrity would remain.

Finally, it’s time for the parts of the British Isles whose economies are like domestic tax-havens, and whose statistics presently are excluded from those of the United Kingdom, to become visible; to join a new United Kingdom. The Channel Islands and the Isle of Man function as part of the UK. Such a new union could even include devolution within England; the Peace of the Roses.

I don’t know how Europe gets to such a fluid place, with many small fault-lines rather than a few very big ones. But I sense that the Brexit referendum outcome may be the beginning of a new conversation that gives hope to all of Europe. The complacency of the ruling establishment has been shattered, for the better.