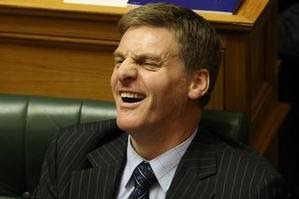 If I had to choose a Mastermind topic right now I would be torn between Paid Parental Leave; Kiwi music 1960-2005 and Standing Orders Associated with the Use of Financial Veto.

I’m surprised to find myself somewhat of an authority on the financial veto – this certainly wasn’t by choice! But four years ago (April 2012)

Finance Minister Bill English threatened to use one on our proposal to extend paid parental leave to 26 weeks. Three weeks ago he finally did it.

Last week we had the bizarre result of that decision when, for the first time in our Parliament’s history, a Bill was debated a third and final time and no vote was allowed at the end of the debate.

If a vote had been allowed, then the Bill would have passed.

People might be surprised to hear that I do think there is a place for the use of a financial veto in MMP Parliaments. After all, it is a feature of MMP that Minority Governments can and do exist and they should be able to execute their programme through the Treasury benches.

However MMP also means that Parties elected to represent the views of the people, must be able to do so even if that defeats the view of a minority Government.

I believe that last-minute amendments that do impact on the Crown accounts but have not faced full select committee scrutiny should face the prospect of a veto from the Government.

But I also believe there are circumstances under which they should never be allowed.

In my view the financial veto should NOT be allowed when:

1. The measure has been scrutinised by a select committee and ;

2. The majority of public submissions have been in favour of the measure and ;

3. Official costings have been obtained to inform MPs on their vote.

Despite my request to do so, the National Party MPs on the select committee refused to put the agreed official costings in the report back to the House on my Bill. They then spent the next six weeks making up figures to exaggerate the cost and muddy the waters – that is not democracy.

I also think Parliament needs to define what “more than a minor impact” is on the Crown accounts, as this is the criteria the Government needs to meet in issuing a financial veto at present.

The way the Standing Orders apply at present mean the Minister of Finance can issue a financial veto on a measure that costs just ten bucks without having to show that it is “more than minor.”

For the record, my Bill would have cost just 0.7% of the NEW spending for Budget 2016 and 3.6% of the NEW spending planned by National for 2017. At full implementation it would cost 0.03% of the $3b worth of tax cuts John Key wants. Is that more than minor? I don’t think so.

I feel a submission to the Standing Orders committee coming on and I’m keen to hear your views.