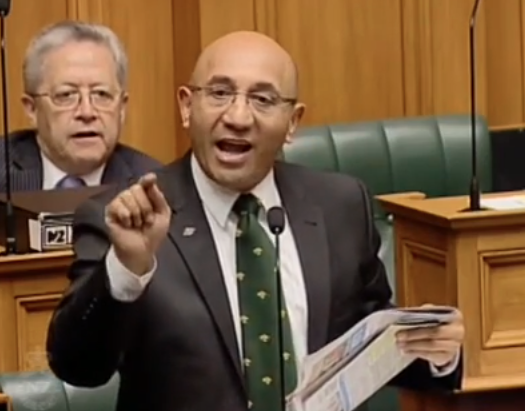 One of the phrases inarguably most common to New Zealand First’s political lexicon is “I told you so”.

On so many things, ranging from immigration to Reserve Bank reform to foreign ownership of our farmland, Winston Peters & Co. are fully deserving of their self-appointed moniker as “Political Cassandras”.

But on the particular issue which lead news coverage last night – that of the New Zealand Defence Force’s mission in Iraq being nearly doubled in duration and considerably expanded in scope – it’s not Winston, but Ron Mark who gets to point to his record of past statements as evidence of considerable political precognition and prescience.

Let’s run back through the record, shall we?

Throughout 2014, and particularly the run-up to the last Election, National made a number of assurances that New Zealand would not be getting involved in Iraq’s internal conflicts. Once elected, Ron Mark called them up on it in Parliament.

Then, shortly after the 2014 General Election, Ron used information from his old Army contacts to make out that the National Government was gearing up to send troops to Iraq.

The Government, of course, denied that this was happening – leading Ron to hilariously surmise that either they were lying … or the NZ Army had thrown off civilian oversight and was operating autonomously in preparation for some form of Coup.

Less than five months later, Ron Mark was vindicated. Despite both the Prime and Defence Ministers being absolutely adamant that they hadn’t directed the Defence Force to make ready for an Iraqi deployment (which is provably false, as it would be impossible to fund the aforementioned preparation efforts out of the previously earmarked operational budget, thus requiring extra funding with Governmental approval to make happen) … in April 2015 the first round of Kiwi troops were dispatched to Iraq.

At the time, a number of New Zealand First MPs – including fellow former Army officer Darroch Ball – noted that it was very likely New Zealand’s role in Iraq would be subject to considerable and capacious ‘mission creep’. Their view was that the public was being ‘softened up’ to a lengthy and larger scale engagement in the Middle East by announcing a smaller scale and shorter duration effort initially – and then over time, progressive escalations in what we’d be doing and how long we’d be doing it for would be announced.

The colloquial term for this is the slightly grotesque metaphor of “boiling frogs”. By slowly increasing the temperature, the person with their hand on the gas-tap is able to get whomever’s unfortunate enough to be stuck in the pot (in this case, the New Zealand Public) to gradually come to tolerate and accept conditions which would previously have been considered interminable.

If the Government had announced that it was sending dozens of Kiwi troops over to Iraq for an at lest four year commitment at multiple sites, it would have sounded abhorrent. So they didn’t. Instead, they waited til pretty much the last possible moment (about a year out from any conceivable 2017 Election) to publicly make out the change.

As already noted, the timing is significant. The Nats wouldn’t dare pull this form of duplicity during the heat of an election year.

And that’s the real issue here.

Regardless of what and whether you feel about New Zealand military involvement in Iraq. Irrespective of whether you think putting Kiwi boots on the ground in Iraq makes us a target; or if you think that training up Iraqi forces somehow makes us safer here at home … the Government has lied, distorted, spun, manipulated and mislead its own people a score of times over this particular issue. There’s just simply no way around it.

The decision to commit our forces overseas is one of the most weighty undertakings which a Prime Minister and ‘his’ Parliament can possibly engage in. It deserves to be deliberated with transparency, openness and honesty – and in a spirit of engagement and consultation with the public mood of the New Zealand People. It should also be put to a Parliamentary Vote – something Key consciously refrained from doing, presumably because he feared he would lose same.

By continually neglecting and marginalizing the truth when presenting this issue to us, the Government has betrayed our trust and placed our serving men and women in danger.

All I can say is … I hope the treasured prize of a US Navy ship visit in the near future was worth selling out our own people for.