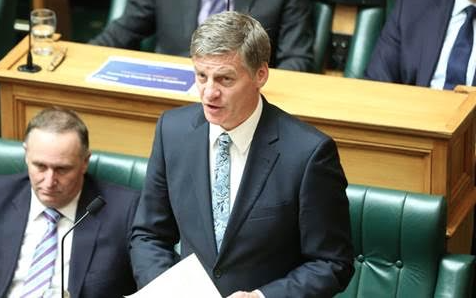 BILL ENGLISH’S LATEST BUDGET is a masterful exercise in deception. He has done everything he can to mask the effects of the most rapid expansion in New Zealand’s population since the 1970s. The monies allocated to the core centres of state expenditure – Welfare, Health and Education – barely match the rising numbers they are expected to serve. Faced with an intensifying housing crisis, English’s response has been wholly inadequate. Determined to preserve the vital political dividend of rapidly rising Auckland property prices, English and his colleagues have steadfastly refused to address the supply-side of the housing equation. The crash programme of state house construction that would end the crisis must wait for a change of government.

All governments take care to tax and spend with an eye to their re-election. It is a rare political party that will sabotage its own chances of remaining in office by threatening the status and wealth of their core constituencies. In the case of the National Party, self-preservation means doing as much as is politically feasible to advance the interests of farmers, businesspeople, managers and professionals. In the case of the Labour Party, it means looking after public sector workers, low-to-middle-income private sector employees, beneficiaries and those elderly New Zealanders more-or-less reliant on NZ Superannuation.

English has clearly decided that the best way he can help National’s core constituencies is to retire as much public debt as possible and reduce the New Zealand state to approximately three-quarters of its present size. Dismissing these goals as “purely ideological”, while true, largely misses the point. It is simply what must be done to give National’s supporters what they most want from “their” government: lower taxes for themselves, and higher stress levels for everyone else.

This latter goal is a crucial aspect of right-wing politics. Only by consistently reducing the political competency of their electoral rivals’ core supporters can the Right be sure of not only making the gains they seek – but keeping them. Simply maintaining the economic and social status quo is never enough. To keep – let alone advance – the interests of their electoral base, right-wing parties must seize every opportunity to reduce the electoral heft of the Left’s.

This right-wing aggression presents social-democratic parties like Labour with a massive dilemma. To advance the interests of their electoral base it is necessary to advance the interests of New Zealand as a whole. Investing heavily in upgrading the nation’s infrastructure; stimulating employment growth; boosting Health and Education; building thousands of state houses and subsidizing private sector house construction: such measures benefit not only Labour’s voters, but also, thanks to their expansionary economic effects, National’s. The balance of political forces is not materially affected.

The only way for Labour to consolidate and increase its political advantage is by becoming as aggressive as its right-wing opponents. Providing decisive legislative support for the trade unions and intensifying the progressivity of the taxation system are the traditional methods for boosting the power of the lowest socio-economic groups. Unfortunately, any Labour Government attempting to implement such a programme in today’s political environment would instantly be identified as not only a deadly enemy of the National Party and its supporters, but also of the entire capitalist system.

Every weapon in the Right’s extensive arsenal would be deployed against such a government, leaving it with just two choices: submission, or revolution. Our present crop of Labour politicians made that choice a long time ago. Whatever else they may be, Labour’s Caucus are not revolutionaries!

English understands very well the degree to which Labour’s room for political manoeuvre has been circumscribed by the events of the past 30 years. It is what gives him the confidence to contemplate policies – such as his “social investment” programme – that will alter fundamentally the way the poor and disadvantaged are managed by the New Zealand State. That the Finance Minister’s changes are being made incrementally will in no way diminish their long-term impact.

English and his colleagues are also well aware of the impact their policies are having on the lowest socio-economic groups propensity to participate in the electoral process. Slashing and burning the lives of the poor has not, so far, caused them to mobilise politically (let alone electorally). On the contrary, the increasingly desperate character of their existence has made them easy prey for the three “A’s” of social dysfunction: Alienation, Apathy and Anomie.

None of this is acknowledged in English’s Budget Speech, nor, for the most part, in the analyses of the mainstream news media. The Finance Minister’s deception has, once again, proved highly successful. What’s more, his ruthless reduction in the real value of state spending over the past 8 years has, finally, provided him with a series of substantial budget surpluses. These are projected to be of sufficient size for English and Prime Minister Key to offer their core supporters meaningful tax cuts in 2018-19. Any ethical misgivings National’s supporters might be experiencing currently about the condition of the poor are unlikely to survive their Finance Minister’s election year munificence.