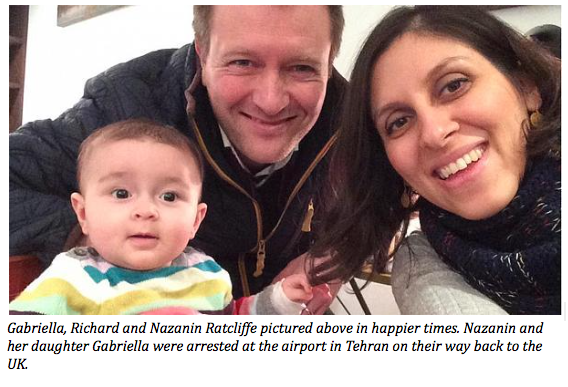 I am writing this knowing full well that, one day, it might land me in an Iranian jail where British-Iranian National  Nazanin is at the moment.

On April 3rd, 37-year-old Nazanin and her 22-months-old British daughter, Gabriella, were arrested at Imam-Khomeini’s airport on their way back to the UK. They had travelled to Iran to visit Nazanin’s parents in Tehran.

53 days have now passed since the arrest.  Nazanin was put in solitary confinement for 45 days before being moved to a group cell.

No charge has been laid and Nazanin has no access to a lawyer.

It must be heartbreaking for both Nazanin and Richard to be separated from Gabriella when she is at such a tender age and under such difficult circumstances. Nazanin’s parents are caring for Gabriella at their home in Tehran.

Gabriella is unable to join her father in the UK because her British passport has been confiscated.

Nazanin’s husband has started a campaign page to put pressure on the Iranian government to free Nazanin.

The campaign has had a celebrity endorsement and, so far, more than 70, 000 signatures have been gathered from all over the world; but many of Nazanin’s close Iranian friends have been too afraid to sign because they want to be able to travel to Iran to visit their families.

I know many of my own Iranian friends living in the US, UK and here in NZ haven’t signed the petition either because they are scared of the consequences.

I must say that I had huge reservations about writing this piece too.

I love Iran and would like to be able to visit the country that I grew up in.

It is taken a long time for the mental scars of living under the Islamic Republic to heal but the older I get the more of a pull I feel towards the country that I emotionally abandoned over 30 years ago.

Most importantly, I would like my 13-year-old son to be able to visit Iran one day and to find out more about its rich culture and history.

The despotic Iranian regime has sustained itself through creating fear: fear of isolation and abuse, fear of torture and death.

As recently released Iranian cartoonist Atena Farghadani said, we must stop being afraid.

Shortly after her release from prison for “insulting members of parliament through paintings”, 28 year-old Farghadani released a YouTube video detailing her ill treatment in the hands of female prison guards. 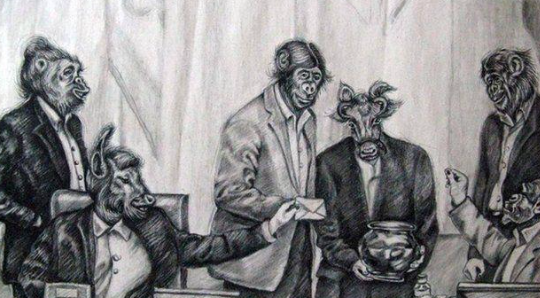 Atena Farghadani’s cartoon depicted Iranian Members of Parliament as animals for their attempt to reverse access to contraception and criminalising voluntary sterilization.

Farghadani was released on May 3rd following considerable international pressure and after serving more than a year in prison. New Zealand comic artist, Toby Moriss, was part of that international support. His webcomic for The Wireless was inspired by Faraghadani’s courage to speak out.

We can do the same for Nazanin.

Let’s make sure that Nazanin is released by June 11th in time for Gabriella’s 2nd birthday.

Nazanin’s husband, Richard, has asked for hand-made cheerful birthday cards for Gabriella to be sent to the nearest Iranian embassy.

If you can, please get your children or grandchildren or even your school involved to make birthday cards for Gabriella. I am sure it will be of great help to the family.

You can send your birthday cards to:

Embassy of the Islamic Republic of Iran

Lastly, let’s not forget other prisoners of conscious currently languishing in Iranian jails. You can read about them here.

Donna Miles-Mojab is a British-born Iranian New Zealander interested in human rights and justice issues. She is currently studying postgrad journalism at the University of Canterbury.