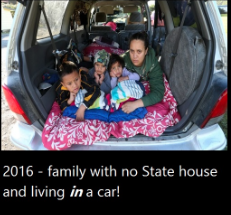 Hundreds of state houses in Tauranga and Invercargill could be sold to independent providers in the first phase of the Government’s plans.

In January Prime Minister John Key announced that state house reforms would see up to 2000 state homes sold to “community housing providers” this year, as it cuts the number of state houses it owns by 8000 over three years.

Although the Government was marketing the process as “transfer” the houses would be sold to community groups, generally charity based providers. Because the houses would have to be kept as social housing rather than private sales, the houses were expected to be sold at a discount to the market value.

In a blogpost in November last year, I pointed out the oft-repeated phrase used by our esteemed dear Leader and various Ministers;

Various ministers, including our esteemed Dear Leader,  have indicated that up to “a third” of state houses are “in the wrong place or wrong size (or ‘type’)”.

The “wrong size/wrong place” claim is the argument used by National to advance a major sell-off of Housing NZ properties.

“It’s about being smart in what we’re doing. So you just look at us having the wrong houses, in the wrong place, of the wrong size..”

On 2 December, 2014, the Minister responsible for Housing NZ, Bill English expressed his agreement with the proposition of one third of Housing NZ homes being in the “wrong size/wrong place” ;

“Yes. As recently as just last month Housing New Zealand issued a press release that said: ‘around one third of our housing stock is in the wrong place, wrong configuration or is mismatched with future demand’.

… in fact, a third of them are the wrong size, in the wrong place, and in poor condition.”

On 28 January this year, John Key announced in his “state of the nation” speech;

“Around a third of Housing New Zealand properties are in the wrong place, or are the wrong type to meet existing and future demand.”

After lodging an OIA request with relevant Ministers late last year information released under the  Act suggests that National’s oft-repeated claim that around “one third” ( or 22,000)  of  state houses are in the “wrong place and wrong size” was not wholly supported by Housing NZ’s own figures. As I reported last November;

Housing NZ currently  “manages 67,245 homes” (as at 30 June 2015). When Key, and other National ministers refer to “around a third of Housing NZ properties”, simple arithmetic translates that fraction into 22,190 homes being the “wrong size/wrong place” .

In a response eventually received on  29 October 2015,  information in the form of a  chart -“Stock reconciliation taking into account impaired properties as at 31 January 2013” – was attached;

In two columns headed “Right Place, wrong home” and “Wrong Place“, the respective figures add up to 13,560. This constitutes a little over half of the “22,000” that is being bandied about by National.

Like much of National’s “facts”,  the numbers did not stack up.

Which led to the last question I put to the Minister; “If HNZ houses that are in the “wrong place” are sold/given away to community organisations – what will make those houses suddenly become in the “right place”?”

Because if it’s in the “wrong place” when owned by Housing NZ – why would it suddenly be in the “right place” owned by someone else?

The Minister’s response was baffling. In his 29 October 2015 letter to me he said;

“The Government has no plans to offer Housing New Zealand properties that have been
identified as being in the ‘wrong place’ to community housing providers. In Tauranga and
Invercargill for example, the areas identified for initial potential transfers of social
housing properties from Housing New Zealand to community housing providers, MSD’s purchasing
intentions anticipate stable demand. Following a transfer, any new provider would receive
both the properties and a contract with MSD to continue to provide social housing.”

English’s response seemed to cast a distinction between State housing “in the wrong place/size” and properties to be sold/transferred to community organisations.

Yet, his statement above would appear to contradict a statement issued by English and Bennett earlier on 6 May last year, which is explained further below under the heading, “The Great Invercargill and Tauranga Sell-Off”.

English’s responses to my questions were vague and offered little in the way of specific detail. In a follow-up letter to the Minister, I repeated two of my questions;

I refer you to two questions which you have not answered in my OIA request;

4. Where are they situated that are considered the “wrong place”?

5. How many areas have been designated “wrong places”?

His response arrived too late to be included in my November 2015 blogpost, but is still highly relevant to the growing housing crisis in this country. On 9 December 2015, English said;

“The analysis produced by Housing New Zealand  in 2013 and provided to you with my previous response [see table here – FM] identifies  the number of houses as being in the wrong place on a regional basis. No specific locations have been designated ‘wrong places’ and, based on this analysis, each region has some properties assessed as being in the wrong place. These will generally be in provincial  areas away from the main centres.”

In none of the Minister’s correspondence was he able to provide specifics as to where State houses were in the “wrong place”. The ‘best’ he could do was list five regions; Auckland East & South; Auckland North West & Central; South Island, Central North Island, and Lower North Island.

However, the Minister’s data was contradicted by the 2014/15 Housing NZ Annual Report which confirmed the on-going high demand for housing in Auckland;

“Across the country we also have too many three-
bedroom properties, while demand has grown for smaller
one- or two-bedroom homes or for much bigger homes.
Demand for homes in the Auckland region is high and
more Housing New Zealand homes are needed.” (p22)

English did, however, point out that “these will generally be in provincial  areas away from the main centres“.

Even that has proven to be a mis-leading assertion from the Minister. Tauranga is certainly a “main centre” by most definitions, and the choice of that city would  prove to be embarrassing to National, as the next chapter below showed.

The Great Invercargill and Tauranga Sell-Off

As National began to roll  out it’s sale of State houses, Bill English specifically referred to State houses being sold in  Tauranga and Invercargill. On 6 May last year, Bennett and English released this statement;

“This is another important step to creating a more effective and efficient social housing sector with more housing providers supporting tenants and their needs.” – Housing New Zealand Minister Bill English.

As announced by the Prime Minister in January, the Government’s Social Housing Reform Programme includes plans to transfer 1000 – 2000 HNZC houses to registered CHPs over the next year.

“We’ve gone through a robust process to identify the first areas for potential transactions. Tauranga and Invercargill have been chosen because they have stable demand for social housing, and active community housing providers keen to consider the next steps. Providers in other regions are also interested.” – Social Housing Minister Paula Bennett

English and Bennett continued to exploit the “wrong size/wrong place” spin that National was using to disguise the privatisation of State housing.

Bear in mind English’s statement in his 29 October 2015 letter to me, where he said;

“The Government has no plans to offer Housing New Zealand properties that have been
identified as being in the ‘wrong place’ to community housing providers. In Tauranga and
Invercargill for example, the areas identified for initial potential transfers of social
housing properties from Housing New Zealand to community housing providers, MSD’s purchasing
intentions anticipate stable demand. Following a transfer, any new provider would receive
both the properties and a contract with MSD to continue to provide social housing.”

Obviously the Ministers find it difficult to keep their “story” straight.

In March this year, potential buyers for State houses in Tauranga and Invercargill had been lined up;

Four potential buyers have made the final shortlist to buy over 1400 state houses being sold in Tauranga and Invercargill.

In Tauranga, Accessible Properties, Hapori Connect Tauranga, and Kaiana Community Housing Partners made the shortlist to take over 1124 properties or tenancies.

However, even as National’s English and Bennett were prepping State houses for sale, the country’s housing crisis began to be reported elsewhere throughout New Zealand.

Tauranga was one of them;

People resorting to living in camping sites and caravan parks?

Is that what this country has come to after thirty years of neo-liberal “reforms”? To become a South Pacific version of America’s trailer-park “communities”?

If, by shuffling ownership of State houses from Housing NZ to “community groups”, National believes it will solve our housing crisis and growing homelessness – they are far more out of touch than I ever thought possible.

This is not just a stubborn pursuit of a free market dogma that has failed to meet basic social needs – this is pseudo-religious self-delusional behaviour from our elected representatives. English, Key, Bennett, Smith, et al, appear to be paralysed into inaction, like possums caught in the headlights of an approaching truck.

Nowhere is this better illustrated than Social Housing Minister Paula Bennett floundering around like a beached cetacean. She first denied that a housing crisis existed in New  Zealand on 20 May;

Five days later, she was willing to bribe homeless and State housing tenants up to $5,000 to quit Auckland, making  a sudden announcement that caught Finance Minister Bill English off-guard;

I have said it before and will repeat my conclusions that National is incapable of resolving this crisis. Considerable State intervention is required, and that is anathema to a political party whose very DNA is based on the free market; reducing State involvement in commercial and social activities; and promoting private good over community benefit.

It will take a collective anger from New Zealanders to take notice of what is happening in their own society. At the moment, so many New Zealanders seem insulated from the  growing social problems that are worsening with each passing day.

As Shamubeel Eaqub said on Radio NZ’s Checkpoint, on 26 May, there is an absence of empathy amongst many New Zealanders – a moral-disconnect with the poor; the homeless; those who have been left behind after thirty years of failed neo-liberal theory.

Remarkably, Eaqub invoked the name of Michael Savage, when New Zealanders were capable of building and solving social ills. For an economist,  Eaqub has deep insight where we have arrived in the year 2016;

“The only thing that’s missing now is aspiration and leadership,” he said.

Perhaps our economist friend has nailed the problem perfectly; 21st century New Zealand is not just suffering from economic poverty. There is a poverty much, much worse.

A poverty of spirit.

And that affects us all, regardless of wealth and income.

Bay of Plenty Times: People living in caravan parks while waiting for a rental

The Daily Blog: Paula Bennett blindsides her own Finance Minister in desperate scramble to respond to housing crisis

The Standard: Newshub poll – Key’s government has failed on housing

The Standard: Bennett’s housing “announcement” is a re-announcement and a lie