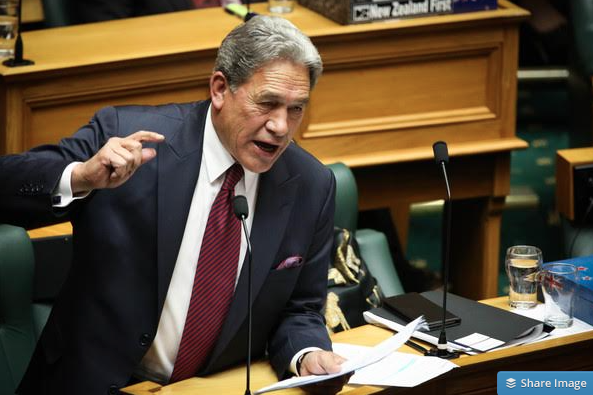 Well this is interesting, isn’t it. The Australian media’s managed to join the same dots Winston has in the run-up to today’s Budget – yet which mysteriously appear to elude the general comprehension of our National party.

New Zealand’s public services are, in some areas, being run down. We’ve already seen tangible evidence of this in the form of the government’s decision to close up a number of police stations in the name of cost-cutting. They’re also refusing to engage in much-needed new spending in core areas such as paid parental leave.

Why is the government indulging in cost-cutting rather than engaging in service provision?

Because they want to pay down debt.

Why do they want to pay down debt?

Because they want to be able to dole out several billion dollars worth of tax cuts either just before or just after the 2017 General Election, as part of their bid to win a much-vaunted – indeed, nay mythical post-MMP – 4th Term.

They certainly need something potent to distract the electorate’s attention from the steadily increasing overweening arrogance of the government in general and the Prime Minister specifically.

The trouble with this (well, one issue out of very many) is that there is a dual-ended squeeze going on with our public services.

At the same time that our government is attempting to put less money into service provision in the name of reducing taxation, strong population growth through high net migration to New Zealand means that shrinking level of public services is spread out over an ever-increasing number of people.

This means that even if we WEREN’T adding 68,110 people a year to our country – a population easily the size of Nelson – we would be feeling the pinch. As it is, large scale immigration (arguably used by the Nats to keep the economy buoyant by adding demand and the cash immigrants bring with them to settle here) is inarguably exacerbating these problems.

Now I’m a bit different from some in New Zealand First, in that I don’t tend to believe that simply cutting immigration is the first-line or even largest part of the solution to our upcoming public service crunch.

Instead, I’d much rather the conversation were focused around sensible alterations to our national tax regimen designed to put more revenue into the government’s coffers so as to pay for proper, first-world public services. We could start with reversing Bill English’s “fiscally neutral” 2010 tax cuts – which apart from putting a hole in the books that’s now equivalent to well over six billion dollars, also regressivized our tax system and lead to lower income families and beneficiaries actually paying MORE tax in order to fund taxation-cuts for the wealthy. We could also review mechanisms around tax evasion and tax avoidance, to open up some of the anywhere between two and seven billion dollars sucked out of the government’s revenue stream (and therefore service provision) through tax fraud and evasion. And speaking of foreign arrivals, the accounting tricks used by big multi-national firms to avoid paying their fair share of taxes here in New Zealand (responsible for tax-losses of perhaps $500 million a year) need to be stamped out.

It’s probably completely unsurprising that the government’s been well appraised of that last issue for some years now, and doesn’t appear to have done anything substantial in the interim to solve it.

But if the National party is going to insist upon persisting with its economic austerity-lite agenda of service cuts in the hope of future election-bribe tax reductions … then it needs to be clear and honest about whether what even Bill English concedes to be fiscally problematic population growth delivered through substantial immigration numbers is, in fact, sustainable.

The only party leader who’s publicly noted that we’re in this situation is Winston Peters.

Which means we effectively have a choice as a nation. We either restrain population growth, or we start taxing properly.

Unfortunately, the government seems to have the gumption to do neither. And as a result, we all pay the price in reduced services – regardless of where we come from.