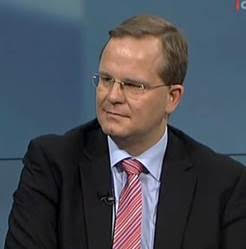 WHEN DR OLIVER HARTWICH departed his native Germany for the Anglo-Saxon lands it was in high dudgeon. In spite of the fact that German taxpayers had paid for his entire education – from primary school to university – there wasn’t much evidence of gratitude. Meeting the cost of young Germans’ education out of the public purse was, in the newly-minted economist’s opinion, a dangerous policy relic of Germany’s social-democratic past. The British and the Americans had long since dispensed with the notion of publicly-provided tertiary education. It was, therefore, to the English-speaking world that this eager young neoliberal foot-soldier took his publicly-funded doctorate.

New Zealand is, of course, very much a part of that world. Hartwich arrived here via England and Australia, where he was a major force at the Sydney-based Centre for Independent Studies (an extreme right-wing think tank). When the notorious Business Roundtable joined forces with the NZ Institute in 2012, Hartwich was the corporate bosses’ pick for Executive Director.

Moved to contribute an opinion piece to Interest.co.nz on Labour’s re-commitment to the principle of universal social entitlement in tertiary education, Hartwich has usefully rehearsed all the familiar neoliberal excuses for making young people pay for their education.

“The first thing I would say about free education is that it suffers from a basic flaw:” writes Hartwich, “If something does not cost anything, it is not valued much either.”

This observation, Hartwich tells us, is born of his “personal reflections of free tertiary education”, and is not to be confused with rigorous policy analysis.

That being the case, let me respond in kind by declaring that my own experience of free tertiary education threw up not one case of a recipient who did not value their opportunity to explore the life of the mind in their late teens and early twenties. Quite the reverse, actually.

University was a magical place, insulated from the charges of the workaday world, and collectively dedicated to the expansion, communication and acquisition of knowledge. If a vocation was one’s sole purpose for attending, then those skills were available. But of infinitely greater value to students than a mere “meal ticket” was the access that university afforded to the signal achievements of their culture. Young people emerged from tertiary study as both engaged and enlarged human beings.

“What it means in practice is that when university courses are free, students will think about them differently. Some students may begin their studies without much commitment because, well, it does not cost anything. They might also then take a more relaxed approach to studying since, again, it does not cost them anything (other than opportunity costs which are harder to notice). With this attitude, these students may not even bring their studies to a conclusion.”

It is clearly Hartwich’s view that the pieces of paper doled out at the end of its courses are the be-all and end-all of university life. This instrumental view of tertiary education lends itself to the notion that: “as the recipient of something free, you are not in the best position to demand better service. As a paying customer, suppliers need to treat you better if they do not want to lose you. If customers are not paying, they may well be regarded as a nuisance.”

It gets worse. “For a university to be run like any good service provider,” says Hartwich, “it should think about its students as clients. And for students to take their studies seriously, they should be paying for them. Of course, for students who cannot afford to pay the fees, there need to be financing options. But university education as such should not be free.”

Nothing here about the pernicious consequences for both academic rigor and student achievement of turning tertiary education into a commodity. Fully enmeshed in the market economy, university “providers” cannot afford to risk alienating their fee-paying “clients” by holding them to the sort of rigorous academic standards that characterised my tertiary education. If it comes to a choice between jettisoning standards or jettisoning students, the commercially-driven university will sacrifice its standards every time.

“Finally, as someone who has successfully completed a master’s and a doctorate, of course I have a much greater ability to generate income than someone without such qualifications. So the question is, why would I expect that other person to subsidise me? What right do I have to demand people with poor skills in low-wage jobs to pay for my university education that would yield me a much higher income than they would ever have? Isn’t this grossly unfair for them?”

I am always astounded at the neoliberal’s confidence that the above argument should be regarded as the clincher – against which no rational or ethical response is possible. It is only possible to make this case, however, if the concepts of citizenship and social reciprocity are first eliminated from the equation.

Access to tertiary education is every citizen’s right, and so it is also every citizen’s responsibility. The low-wage worker contributes to the cost of a wealthy person’s children’s university degrees because the wealthy person contributes to the cost of the worker’s kids’ post-school education. For the low-wage worker, this is a huge step forward, comparable in its life-enhancing effects to the provision of universal health care.

But the very notion of “middle-class welfare”, or, as Hartwich puts it, “the reverse of income redistribution” only makes sense in a neoliberal society which no longer subjects its wealthier citizens to the rigors of progressive taxation.

Of course the graduates of Law and Medical School will earn more than workers “with poor skills in a low-wage job”, but in a decent, social-democratic society, the lawyer and the doctor will also pay much higher taxes. It’s all about your fellow citizens paying you forward, and you then paying them back.

This was the socio-political environment from which Dr Oliver Hartwich fled and is ideologically committed to destroying. It is also the socio-political environment in which I was raised, and which allowed me to attend university without incurring massive debt. That Labour is pledged to restoring this environment is extremely heartening. Not only because it will make this a more just and equal country to live in, but also because any such restoration of social-democratic values in New Zealand will, almost certainly, see Dr Hartwich high-tail it for more congenial jurisdictions.