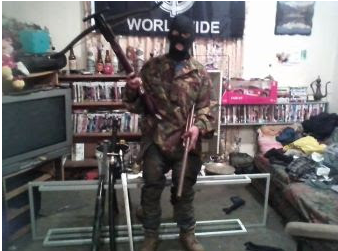 Ben Peterson explores NZs far right. Deranged but Dangerous is a two-part article looking into the threat of White Nationalist extremists in Aotearoa/New Zealand. Part One will look at the preeminent White Nationalist organisation – the Right Wing Resistance (RWR). Part Two looks at the ways this organisation and its politics interact with the New Zealand state and government.

Pakeha New Zealand doesn’t seem the most obvious place for a militant terrorist organisation. Mainstream Kiwi culture doesn’t lend itself to fire and brimstone. The closest thing to a national injustice for Pakeha is the ongoing contested claim to authorship of the Pavlova (bloody Australians!). But, behind the stoic silence and suburban sprawl, there does lurk a more dangerous element. Men dressed in black gather in lounge rooms and backyards. Their record is proven. They’ve organised attacks on public places and institutions before. Many have been to prison for their cause and they are planning a war.

These are not Jihadi sleeper cells. They are New Zealand’s White Nationalists .

New Zealand has an organised and active movement of extreme racists. While they are small and on the fringes, they are real. Far from being driven underground, you can find contact numbers online and be friends with their leaders on Facebook. The Right Wing Resistance (RWR) is New Zealand’s preeminent White Nationalist organisation. RWR have networks and members across the country. As part of researching this article, I called their current National Director, “Colonel” Vaughan Tocker. 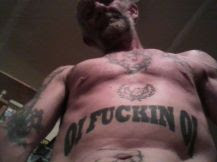 This is Vaughan Tocker.

Vaughan is exactly the kind of cliche of a man that you would expect to be running a white pride group. His Facebook posts alternate between rants against the threat of Sharia law, and graphic pictures of dismembered bodies from warzones. Something about the gore seems to be exciting to Vaughan. He regularly posts videos and pictures of workplace injuries, they seem to be self inflicted. Vaughan originally became a white nationalist after his wife left him and began a relationship with another man. This new partener was Egyptian. Most people are hurt by the departure of a partner; many can be resentful. Most people, however, wouldn’t see their relationship breakdowns as part of a global pattern of a racial war on white people. Vaughan Tocker is not most people.

I spoke to Vaughan when I called the RWR contact number. I said I was writing an article and asked if I could have a chat to him about the RWR. Vaughan was at a BBQ for Resistance members. He was clearly wasted, but to Vaughan the opportunity to talk to another white man (“you are a white man, right?”) was too good to miss. Vaughan ranted down the phone on a range of topics. There were the obvious nonsensical arguments: “Indian dairy owners are a threat to white culture” and “Helen Clark is flooding the country with Jihadis”. But at times his arguments seemed (briefly) sophisticated and detailed, at one point making a critique of industrial export agriculture’s effect on the environment.

His rants were many and varied, but one point was central to everything Vaughan had to say. He was at war. He is a soldier for the white race, and in his mind the common denominator to all the evils of the world was inter-racial conflict. It’s a white man’s world, and Vaughan intends to keep it that way.

After about 15 minutes of increasingly angry ranting, Vaughan’s phone cut off mid-sentence. When I called back the call couldn’t get through. It seems his battery had died. It was almost as if even technology only has a limited tolerance for bullshit.

Are they really dangerous?

After ending the call, my first impulse was to thank the Universe that this man and his group are largely an inept group of misfits on the fringes of society. Some might argue that because they are small and isolated, talking about RWR is counterproductive. Shouldn’t we just ignore them and not give attention to the crazies? Unfortunately, just because they are marginal does not mean they cannot be a terrifyingly dangerous force.

The RWR having mass appeal is not an immediate threat. While it is possible that over time this may change (see Golden Dawn in Greece) the RWR lacks the coherent message and articulate leadership to develop any significant constituency. 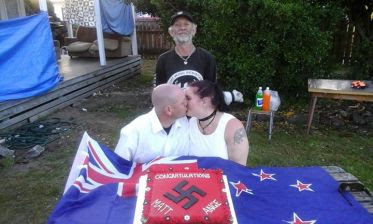 Matt and Angela Goodman, with Vaughan, celebrating with Nazi-cake.

To understand their political project, it is necessary to understand that RWR’s central belief is that there is a coming global race war. They don’t need to win the vote, they need soldiers, and RWR organises accordingly. Training up young men and indoctrinating them to believe that they are the front line in a global race war has the potential for these individuals to take matters into their own hands. This has already happened overseas.

On July 22, 2011, Norwegian Anders Behring Breivik set off car bombs in Oslo and attacked the youth camp of the Norwegian Labour Party, killing 77 and wounding 300. He operated as an individual for his attacks, but had a long history of collaborating with right wing extremists before this point. Tackling these right wing organisations may have stopped Anders from receiving the moral and political encouragement necessary for him to make those deadly decisions.

RWR helps to create the conditions for these attacks to happen in the future. Angry boys, guns and racism are a dangerous mix.

The war could start at home

The central point of Vaughan’s politics was his belief in the inevitable global race war, and his ideas on political organising flowed from this. RWR organise militarily. When I called, Vaughan openly bragged about the militia structure of RWR. “You see, I run a militia. I am aColonel and we are training guys up. When the war comes we are going to be ready.” 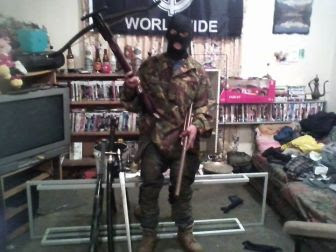 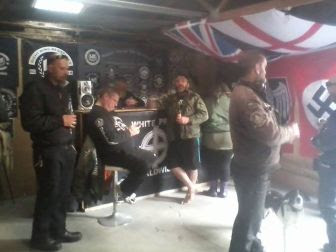 This militarism is central to everything RWR does. Members pledge to “fight for their family, race and nation”, and videos of these pledges are uploaded to Facebook. Members pose with guns and other weapons. They organise on quasi-military lines, with ‘divisions’ and local commanders. Members are expected to follow orders of the local Führer, and in return may be given higher rank themselves.

The central project of RWR is their planned “landbase”. The group is saving money to buy land and relocate many of their members to this site. Once secured, they intend to fortify the site and use it to provide “training” to new members and host gatherings of their supporters. Vaughan tells me that they have so far raised $42,000 dollars for this project, which is a significant resource.

For most members of RWR, this will never escalate beyond an elaborate game of dressup for angry white boys. Even if RWR as a group made a decision to attempt an armed putsch, their military capacity is very questionable.The threat isn’t that RWR as a whole will overtake the New Zealand state. The threat is that the RWR creates a space where angry young men can receive the moral and logistic support to launch individual attacks on immigrants, Māori and/or leftist activists. In the Right Wing Resistance there is a bragging macho culture. This kind of culture can lead to a feedback loop, where extreme ideas and actions are encouraged. This logic leads to escalating rhetoric, and it only takes one member of RWR to move from words to actions for this to have dire consequences, as we have seen overseas.

To stop similar attacks in New Zealand/Aotearoa RWR needs to be challenged.

Not on our watch

There are two ways in which right wing extremists can be challenged- challenging racist politics in general, and targeting Right Wing Resistance and its members.

The point is not to argue with the true believers. It is unlikely that Vaughan will be convinced that brown people aren’t out to get him, so refuting his arguments point by point would be a waste of energy. At the same time, it is essential that we isolate racist ideas.

Most racists do not get swastika tattoos or read Hitler. Most racists are just worried that ‘the chinese’ are the cause of Auckland’s housing crisis, or believe racist myths about Islam spread by governments in advance of wars overseas. If those racist ideas are allowed to be acceptable in the mainstream, this gives credibility to the white pride brigade.

Challenging racist government policies and media stereotypes are as important as challenging the Right Wing Resistance itself.

(This political aspect will be investigated further in part two)

While the RWR does not need to win mass support – it does seek some respectability. It seeks to build a small community, and wants to reach out to disengaged white youth and provide a space of belonging. For RWR it would be a significant advance to be able to openly recruit and fundraise.

Disrupting RWR undermines their ability to function. When their events are picketed by counter protesters their ability to gain momentum and integrate new recruits is limited. Many of their members lead double lives. Someone who might appear “normal” on a day to day basis may be Heiling Hitler on their weekends. RWR is dependent on these people’s income and community networks for finance its activities and bring in new recruits.

Political groups (such as the anti-TPPA campaign- Vaughan was very proud of his attendance at these rallies) can and should seek to exclude RWR and its members from their events. Community groups, including sports clubs or social groups should take a stance against RWR being involved and cancel the membership of known racists. Anti Racists should avoid doing trade with businesses that are run by or employ known RWR members- and should actively encourage others in the community to do so to. Targeting the sources of RWR funds can go a long way to undermining the organisation.

Below is a list of names and pictures of known RWR members. I hope that this can help some communities be aware of the activities of some within their midst.

A second article will look closer at the political aspects to Right Wing extremism and the relationship between Nationalist Militia and the New Zealand Government/State. 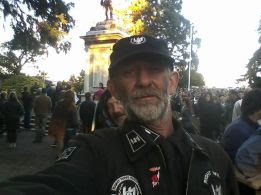 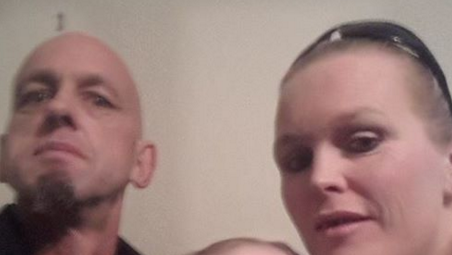 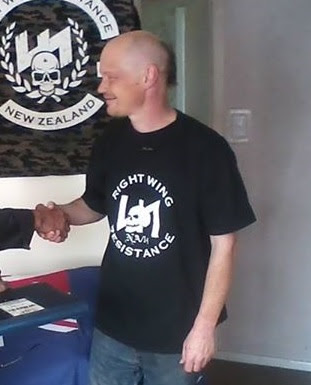 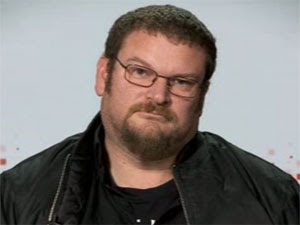 Many many more pictures, names and general areas to come-

Ben Peterson works for Unite Union on the South Island. He’s a long time socialist and a member of the Mana Movement.