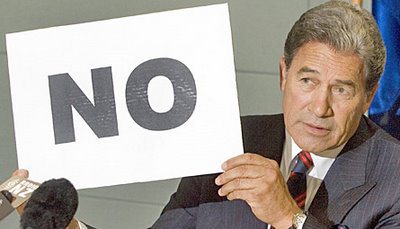 Just as you are trying to forgive Winston for all the mindlessly populist and stupid things he’s said in the past, out pops a brain fart that reminds you just how old dear Winston really is…

Winston Peters: Tell male refugees to go back and fight
New Zealand should take only women and children refugees from Syria and tell the men to return home and fight, NZ First leader Winston Peters says.

…shush now Winston, someone go get the man a drink. The stupidity of demanding men return to fight in a war as fractured as Syria is almost as mindless as appointing someone with all the socialisation skills of a tumour as a Comms Person for a Political Party.

Who are these men supposed to fight for? The regime that has tortured to death tens of thousands of their own citizens or ISIS who are just as violently crazy? Is Winston suggesting they create a whole new faction and who will arm them?

There are times when Winston has something to add to the date, this is most certainly not one of those times.