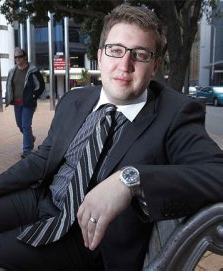 The Ruminator is one of the rudest, nastiest Green Party Wellington clique members on Twitter and the Greens have appointed him as their Comms Person???

This is the most delightfully funny event of the year.

I was wondering who the hell would appoint someone as self important as Giovanni Tiso and as undeservingly smug as Wellington to their comms position when David was on Twitter begging for a job earlier this year, and it’s turned out to be the Greens? I thought is was hilarious that someone who had spent so much time attacking anything outside Wellington would be on Twitter begging for a job in Comms, and it’s ended up being for the Greens?

Nothing sums up the impenetrable little echo chamber of the twittersphere better than David does, and appointing him of all people to a role as vital as Comms suggests the tiny world of the Green Party in Wellington just got far smaller.

Why a mate of Matthew Hooton and former staffer of Bill English was deemed the right person for the Greens suggests that march to the centre has over stepped its mark.

Oh this is a delightful turn of events. The last thing one would have thought the already Wellington biased Green Party needed was yet another member of the Capital Clique. Hipsters with ambition and top knots will rejoice alongside National voting Prius drivers but the rest of the country will have stopped paying attention a long time ago.

How someone with all the personal charm of a toxic jellyfish has been appointed to a position where they will be required to try and reach out to gain support for policy will be the most amusing thing to happen in politics this year.

Appointing Ruminator as your Comms Person is like appointing Cameron Slater as your brand ambassador. Now that’s fine if your brand is Cancer, but not so great if you are trying to be a progressive political party.

The vote share for the Greens in Auckland just slipped.

UPDATE: Now some may be reading this and saying to themselves, ‘Jeez Bombs, that’s a bit mean to old David isn’t it mate’? – and they’d be right. It is mean. I think the day I decided that I disliked David was when he took to Twitter last year claiming that he had personal information about me that if he released would be ‘damaging’ (to this day I have no idea what he was talking about). But I just felt that after threatening me, denigrating me repeatedly on Twitter and going out of his way to misrepresent almost every blog I ever wrote, that the guy was an arsehole. It’s surprising then that the Greens have decided that what they needed most was another Wellington arsehole, what with them being so over supplied in that category.

Perhaps if the Senior reporter at Fairfax Media had been threatened with having personal information released about him on Twitter, he’d be a lot less churlish than this…