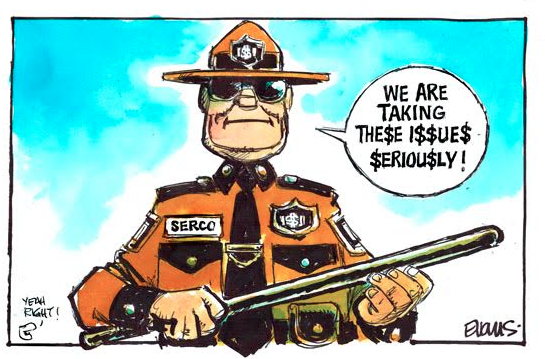 As TDB first reported back in July, the allegations of wrong doing within Serco are set to get worse.

Kelvin Davis has met inside prison with prisoners and the list of abuse is immense. Expect him to start dropping them in Parliament during question time over the coming weeks.

The whitewash report into the allegations at Serco follow previous unpublished reports that highlighted concerns going back over a year. Why haven’t THOSE reports been released and when will they?

Serco are looking now at Rail and social housing. God only knows how a private corrupt corporation will manage safety on trains and housing going by their failure in prisons.

British multinational Serco is in trouble. After years as the favoured outsourcer for public services in Britain and countless countries around the world, the latest figures show a financial crash of unprecedented proportions. The firm announced it is writing down its business value by nearly AU $3bn with no dividend for shareholders and a plea for an injection of a billion more dollars. This is a “bitter pill”, according to its chief executive Rupert Soames.

Revealingly, the corporation admitted that without its Australian detention network, its profit would have been even worse. In other words, imprisoning asylum seekers in poor conditions for extended periods of time in remote locations is good for business. Serco won the contract to manage all of Australia’s mainland facilities and Christmas Island in 2009 – I was part of a team that first published the contract between Serco and Canberra in 2011 – and the profits have soared ever since.

Those of us who have been campaigning against the privatisation of prisons were making these points over 6 years ago, it is sad that the media’s honeymoon with the Government has kept the deep problems here off the media agenda for so long. The reason no one cared about this is because NZers have built up such a media fuelled hatred of prisoners that their abuse has not registered at all as something we should even be informed of.

Stripping prisoners of their right to vote, abusing them and leaving them in poorly guarded environments where that abuse can become the norm should embarrass us. It will barely rate a mention during the Rugby World Cup coverage.