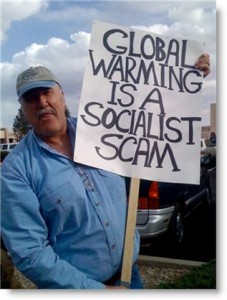 With NASA coming out and admitting that the sea rise from melting ice will be far more damaging than conservative estimates have claimed.

With example after example of freak weather conditions being exacerbated by man made pollution becoming more and more frequent.

With more research showing we have crossed a point of no return with environmental feedback loops now starting to kick in.

Have we allowed the climate deniers, the peddler of lies and quack science for their own cultural bigotry to win the debate and doom us all?

In NZ we have one of the highest percentages of climate deniers in the developed world, with far right hate speech merchant Cameron Slater, Karl du Fresne and Sean Plunkett at one end of the spectrum with outright climate denial and Government pollster David Farrar on the other side of the spectrum by denouncing climate ‘alarmists’.

The tactic is to raise enough questions about the science so that political inaction becomes the norm. Tobacco companies did it with cancer studies for decades to prevent legislation and big polluters and those with cultural bigotry towards agreeing with environmentalists have used the exact same strategy.

The American Association for the Advancement of Science came as close as such a respectable institution can to screaming an alarm last week. “As scientists, it is not our role to tell people what they should do,” it said as it began one of those sentences that you know will build to a “but”. “But human-caused climate risks abrupt, unpredictable and potentially irreversible changes.”

In other words, the most distinguished scientists from the country with the world’s pre-eminent educational institutions were trying to shake humanity out of its complacency. Why weren’t their warnings leading the news?

In one sense, the association’s appeal was not new. The Royal Society, the Royal Institution, Nasa, the US National Academy of Sciences, the US Geological Survey, the IPCC and the national science bodies of 30 or so other countries have said that man-made climate change is on the march. A survey of 2,000 peer-reviewed papers on global warming published in the last 20 years found that 97% said that humans were causing it.

When the glib talk about the “scientific debate on global warming”, they either don’t know or will not accept that there is no scientific debate. The suggestion first made by Eugene F Stoermer that the planet has moved from the Holocene, which began at the end of the last ice age, to the manmade Anthropocene, in which we now live, is everywhere gaining support. Man-made global warming and the man-made mass extinction of species define this hot, bloody and (let us hope) brief epoch in the world’s history.

…the idea that there is still some sort of scientific debate about manmade pollution causing the planet to dangerously heat is a delusion held by the blind who don’t want to see or who have a profit motive not to see.

Clive Hamilton, the Australian author of Requiem for a Species, made the essential point a few years ago that climate change denial was no longer just a corporate lobbying campaign. The opponents of science would say what they said unbribed. The movement was in the grip of “cognitive dissonance”, a condition first defined by Leon Festinger and his colleagues in the 1950s . They examined a cult that had attached itself to a Chicago housewife called Dorothy Martin. She convinced her followers to resign from their jobs and sell their possessions because a great flood was to engulf the earth on 21 December 1954. They would be the only survivors. Aliens in a flying saucer would swoop down and save the chosen few.

When 21 December came and went, and the Earth carried on as before, the group did not despair. Martin announced that the aliens had sent her a message saying that they had decided at the last minute not to flood the planet after all. Her followers believed her. They had given up so much for their faith that they would believe anything rather than admit their sacrifices had been pointless.

Climate change deniers are as committed. Their denial fits perfectly with their support for free market economics, opposition to state intervention and hatred of all those latte-slurping, quinoa-munching liberals, with their arrogant manners and dainty hybrid cars, who presume to tell honest men and women how to live. If they admitted they were wrong on climate change, they might have to admit that they were wrong on everything else and their whole political identity would unravel.

…and that’s the crux of the situation we have now. This stopped being a scientific debate a long time ago, it is now a cultural debate. Right wingers and climate deniers refuse point blank to accept that human pollution is super heating the climate because the solutions demand more than their limited free market mantra can generate.

If the Right are wrong about their uber individualism fetish and unregulated ‘freedom’, then their entire philosophical platforms melt as quickly as ice around the polar caps.

Let’s just remind ourselves what is at stake.

Within the space of a decade we can go from a 7 degree hike in temperatures to a frozen snowball.

The ability for most species to adapt to that kind of climate extreme will see many become extinct and the ability for Governments and civilisations to function crumble.

We have allowed the self interested and the selfish to dominate the debate. The reality is that a response needs to now not only highlight this jealous sophistry and expose it for the spite it is, we need to also promote solutions that openly critique and challenge neoliberal capitalism with courage, not the meekness of those who feel humbled just to be included in the discussion.