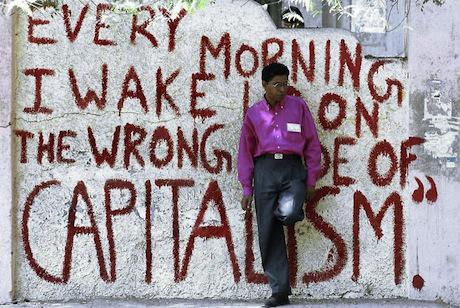 In the world of economics there are no crises, no gender issues, no growing inequality, no precariat hanging on in a fragile labour market by their toenails. No families ‘choosing’ to be cold and sick so they can pay the rent, no mothers  sent to jail for infringing 19th century rules,  no children spluttering up sputum from 3rd world diseases because our  housing is so bad ,no inconvenient  hungry students with enormous debt .

Thus it was this week on Monday at the 13th annual economists breakfast  at the Heritage hotel in Auckland. Economists after economist pontificated on whether interest rates and exchange  rates are going up or down and why and the virtues of quantitative easing that didn’t happen soon enough, apparently, except in the US.  Never a mention of fiscal policy, except the bad effects of increase in GST in Japan undoing their monetary policy easing.   There were no insights into the Chinese sharemarket crash that hit the headlines a few hours later with shocks now reverberating around the world.  Shocks are random or exogenous in the workings of the economists’ models, of passing interest, rather than a systemic and inevitable outcome of a flawed neoliberal market system.

And, of course, there was no mention by the economists of high rates of poverty, , casualisation, low pay and uncertain hours, rampant speculative activity in real estate and growing inequality, even though the IMF and the OECD are regularly warning of the dangers.

As after the collapse of the sharemarket in 1987, the economy and economists are badly prepared for the knock on effects in property markets both here and abroad.   When the inevitable downturn produces higher unemployment, more foodbank demand, foreclosures and widespread mental illness, who asks or cares whether the economic system works for low and middle income people and their children?

Actually, it is not working for them now, when times are relatively benign. One of the more tragic stories of this week is the NZ Herald expose of how young families are faring in the world of work . The incomes of many  parents are not enough to pay their mortgage or rent so mothers must go back to work even when they have babies or toddlers under three. The article explains how after childcare  costs  and various losses such as repayment of student loans and loss of working for families, housing  and childcare subsidies,  families can actually be worse off.

What these cases show is the flaw in the popular mantra that paid work is (always) the way out of poverty.  Ironically the answer is usually seen in demanding yet more and more taxpayer money for childcare and out of school care to ‘make work pay’. Some are arguing for longer and more generous paid parental leave, also funded by the taxpayer. So paid work has to be is made to be the way out of poverty by the state chucking a huge amount of money at it. Otherwise neoliberals  might have to rethink the mantra?

Here is the tragic bit.  Listen to what the mothers are saying:

“The more I earn, the less Working for Families [tax credits] we get and our childcare subsidy is also decreased, therefore I’d be going back to work for diddly squat and also giving up precious time with my children,” wrote Danielle Fletcher from Gisborne.

…even if Mrs Jones could gross $50,000 a year from fulltime nursing, the Herald estimates her family would end up less than $70 a week better off – and, she says, “I would lose time with my tiny, gorgeous baby who is only 2 months old”.

Their very young children would probably be saying “Please, please don’t leave me long hours at daycare it is not good for either of us”

Here is the underlying problem.  The value of a mother’s unpaid care of young children in the home is invisible. But what looked costless, is made visible when she goes back to paid work and must pay huge fees for the outsourced child care each week.

If the taxpayer must subsidise the care of her children for her paid work to be viable then paid work has been oversold. It feeds the idea that taxpayers must pay more to make her work pay because work is such a good thing.  But she also gives up the breastfeeding and the enjoyment and crucially important bonding with her baby for the bondage of a stressful paid job with a pile of added costs. To add insult to injury, even with expensive subsidies, her paid work doesn’t actually make the family much better-off after all.

Does New Zealand really need the labour of women with very young children so desperately that it justifies expensive subsidies for someone else to look after her children for such long hours? What if we paid her some of those childcare subsidies so she could feel she could stay around for her children until they were at least three?  That would make the best interests of baby or toddler more central.  If she needs childcare she can use some of that money to outsource the care but will do it only if it is sensible and viable.

In the meantime, this week, Labour’s paid parental leave extensions are being argued in parliament. Funded by the taxpayer to the tune of $500 million, 6 months of paid parental leave recognises the needs of young  babies for mothering, but only for under one half of all new borns. Even Treasury has long argued that this payment is not a good tool for addressing income adequacy for all families with newborns.  Parents of babies who miss out or get the very limited parental tax credit if they are lucky are just as worthy of having their caregiving role recognised with a payment.

So what about taking all the payments made to mothers on account of their babies – paid parental leave, parental tax credit, in work tax credit and childcare subsidies and make it a decent payment to all mothers for at least the first year of the child’s life? Small steps back from the neoliberal abyss but worth taking.