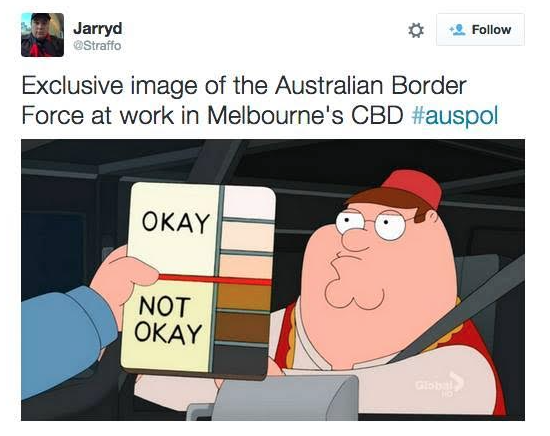 No sooner had news of Abbott’s latest political debacle started spreading across my newsfeed, than it all seemed to be over.

What am I talking about?

Operation Fortitude. A most curious scheme whereby Australia’s answer to Colin Craig in speedos, Tony Abbott, decided to counter his own largely imaginary panic about illegal migrants by deploying his nation’s paramilitary border control service onto the streets of Melbourne in a bid to stop and check the visas of anybody who might happen to look remotely non-Australian or illegal.

You can probably guess whom he meant by that.

Anyway. This operation was announced at approximately 10:14 yesterday morning Australian time, with the local Border Force Regional Commander bluntly stating that “Officers will be positioned at various locations around the CBD speaking with any individual they cross paths with.”

The first thing that leaped out at me upon hearing about this was that it was most peculiar indeed for a large-scale law-enforcement operation to be announced not only in advance – but also in great detail as to precisely *where* in the country it would be being conducted.

This isn’t exactly normal policing protocol in any developed nation I’ve ever heard of where the goal of an operation is to actually catch lawbreakers and intercept infringement. The reasons for this confusion on my behalf ought to be painstakingly obvious … but if you’re having trouble grasping the problem here, consider the following:

Say the Auckland metropolitan police wanted to catch a whole bunch of drug-dealers, specifically the ones who ply their wares down on Hobson St just past the City Mission. This is actually something that’s happened rather recently – in large part aided and abetted by undercover policemen and swift rapid-intervention enforcement actions – and consequentially netted offenders.

Now consider how many drug-dealers the police would have caught in the resulting operation if they’d announced twenty four hours beforehand that they were going to be blitzing Hobson St for drug offenders.

See what I mean?

My suspicions that this was merely a gigantic exercise in police-abetted political PR stuntery were further confirmed by some bright spark’s decision to announce a Border Force press conference, to be convened for 2 p.m Australian time outside Melbourne’s iconic Flinders St Station.

You might like to compare this, in the rubric of our earlier analogy, to the Auckland Police’s district commander walking down the street from Central Police Station to go stand on the corner outside St Mathews In The City while shouting into a megaphone in the general direction of the City Mission carpark “WE ARE GOING TO BE HERE TOMORROW AND SUNDAY ARRESTING DRUG DEALERS”.

But it’s what happened next that truly took my breath away.

Within an hour or so of the press conference being announced, a teeming throng of Melburnians had descended upon Flinders St Station. They didn’t just manage to shut down traffic and trams.

They actually managed to shut down the press conference entirely. I’m told, by hemming Border Force and other associated personnel into the station.

At 2:26 p.m – almost half an hour after it was scheduled to start – the press conference was called off.

Less than twenty minutes later – at 2:40 p.m – the entire operation was called off.

More amusingly, the same institution which had declared earlier that morning that its officers would be “speaking with any individual they cross paths with” in a bid to target visa fraud … then issued a statement declaring that “the [Australian Border Force] does not and will not stop people at random in the streets and does not target people on the basis of race, religion, or ethnicity.”

In other news: We Have Always Been At War With Eurasia.

This is a pretty astonishing backdown by the Border Force and its officials; and I can only look in askance while wondering why the same breathtakingly imbecilic minds who presumably thought this was a goer in the first place suddenly (and thankfully) found themselves insufficiently stubborn to see the operation through the rest of its stultifying chartered course.

It’s possible that one of the brighter minds somewhere in the chain of command realized that pinging everybody who looked even vaguely un-WASPishly-Australian during the course of a jam-packed socializing Saturday night in Melbourne was going to be a thankless and nearly impossible task.

Perhaps somebody quietly pointed out the legal issues Border Force officers were going to have using questionably lawful searches and inspections as the bases and pretexts to pack people off to Immigration Detention hellholes?

Certainly, yesterday’s protests would have played a fairly massive part in the decision-making. It is, after all, pretty hard to carry out sustained and serious policing operations when your host population turns rambunctiously and ribaldly against you.

But I’m wondering. Perhaps the Abbott Administration got spooked. It’s not just a matter of People Power On The Streets. The specter of a readily-armed Border Force (which, let’s all remember, didn’t even EXIST until last month) situated *well away* from the nation’s borders, and taking part in highly problematic policing actions – well, it just leaves a bad taste in the mouth, regardless of how you look at it.

It’s pretty worrying when a country’s government decides to deploy a paramilitary force onto its nation’s streets. Even more so when the reasoning for so doing seems vague and undefined.

Good on Melburnians for standing up to Abbott’s Border Force on this one.