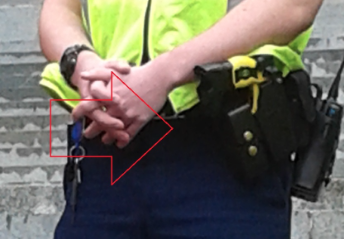 NZ, Wellington, 15  August – Anti-TPPA protesters, many of them young people in their teens and early 20s, faced off against police armed with tasers on the steps of Parliament.

Believed to be the first time that armed police have deployed tasers in a non-violent, non-threatening situation, at least five police officers were visibly carrying the potentially lethal devices on their belts;

At least five  weapons were clearly visible, with other policemen and woman wearing bulky jackets that may or may not have concealed more of the devices.

Though there was some minor jostling between one protester and a Parliamentary security guard, there was no violence or any other physical contact between police and members of the public.

The confrontation began when a lone protester made her way to the top of the Parliamentary steps, and seated herself, adopting a meditating position. For a short time, three police attempted to persuade her to move, though no force was used.

She was followed by others, who also jumped or skirted around the security fence separating the grassy area from the paved Parliamentary forecourt.

As their numbers swelled to approximately a hundred, extra police arrived quickly and with Parliamentary Security, formed a cordon across the steps leading up to Parliament.

March organisors and Marshalls attempted to quell the situation by asking people to move back from the steps, without much success.

Eventually,  jostling and shouting gave way to a calmer atmosphere as March organisors encouraged a constant stream of speakers to address the crowd. The tiny volatile minority, numbering perhaps half a dozen, joined others seated on the steps. One activist played his guitar and sang songs, though at one point he declined a request for “anything by Dave Dobbin“.

After about a hour, the crowd on the Parliamentary forecourt dispersed of their own volition. Police numbers also reduced, with officers leaving the scene.

There was no apparent reason for tasers to be deployed on this occasion. The sight of these weapons incited many in the crowd to angry outbursts toward the police.

More than one person was overheard asking what possible use  four or five tasers would have been against a crowd numbering in the hundreds.

One person, who requested anonymity,  said to this blogger;

“Whoever authorised these guns to be brought out needs their head read. It’s a grim day when cops feel the need to show these things when they’re faced with ordinary New Zealanders engaged in lawful protest. It’s like something out of ‘Sleeping Dogs’.  Really, is this where we’ve ended up, armed cops facing off against women and kids? God help us.”

On this occasion, a tense situation was prevented from escalation not by show of force, but by the wit of organisors who distracted the ‘hot heads’ and encouraged dialogue and engagement.

The best strategy in this stand-off was patience.

Action Stations: A Secret Trade Deal So Terrifying That Parliament Isn’t Even Allowed To Know What It Says