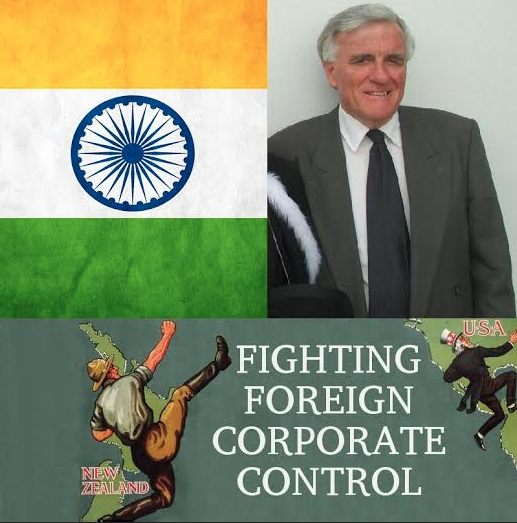 Yesterday marked the birthday of two great entities: the Republic of India, and my father, The Rev. Rolinson. (which happen to be the same age, funnily enough).

Now while it might, at first, seem a little strange to be bringing up the national day of a far-flung foreign country, and one’s father’s birthday in a piece here on The Daily Blog … the reason I do so is because yesterday ALSO marked the occurrence of one of the largest nation-wide demonstrations of recent years: the TPPA Walk Away protests against everyone’s least-favourite infamous trade deal.

So what’s the causal link between these three things?

Well, quite apart from noting that both India and The Rev. have played pretty important roles in my development and upbringing, the lessons I’ve derived from each were foremost in my mind as we marched down Queen St during yesterday’s anti-TPPA action.

First up, in the case of India … August 15th marks a celebration of a hard-won Independence from foreign (and, in the case of the historical East India Company, pretty much the worst excesses ever of quite literally foreign corporate) colonial misrule.

That’s the right of every nation, and something which I found to be almost diametrically opposed to New Zealand’s present experience under this (ironically misnamed) National government.

For you see, one of the most pernicious aspects to the TPPA agreement is the way in which it forces us to GIVE UP OUR SOVEREIGNTY to foreign law-courts and foreign corporations. It’s why New Zealand First put a private member’s bill in the ballot earlier this year to STOP the Investor-State Dispute resolution bits of the TPPA from ever having an effect on our law-making and our judicial process.

So at the same time that many Indian New Zealanders (and, for that matter, quite literally hundreds of millions of people elsewhere on the globe slightly to our north and west) are out there celebrating having won their right to national self-determination and liberation from the pernicious power of foreign governments and corporate exploitation … New Zealand herself is preparing to sign a trade deal which would hand, slowly but surely, a very similar kind of power to that enjoyed by the old colonial empires over their satrapy client-states and vassals to shadowy tribunals working for faceless foreign corporates.

But you try telling Tim Groser that.

Now as applies my father, The Rev. Rolinson … he wasn’t just in my thoughts yesterday afternoon because it was his birthday – or, for that matter, because he helped me make my awesome NZ First Fighting Foreign Corporate Control sign for the rally.

Instead, it was about two things. Values and Vision. Something which, as a clergyman, he’s abundantly blessed with on both fronts.

In terms of values, I would not be the man I am today without his ongoing guidance. (Please don’t blame him *too* severely!) Many of my views about the importance of #nationalism, of social responsibility, the state, and the duties of care which we owe to each other as fellow-citizens of a nominally caring (but not necessarily young) democracy have been formed as the direct and attributable result of our ongoing interaction.

So when I was thinking about the perfidy of this Pacific Partnership (that’s the trade agreement, not our filial relationship), a lot of the values he’s instilled in me instantly leaped to mind. Because this “trade agreement” rides roughshod over almost every single one of them.

There’s no “democracy” (or public participation, still much less “approval”) inherent in how this treaty’s been negotiated – and, for that matter, how we’ve found ourselves signed up and shackled to the damn thing. The sense of “social responsibility” which we’re all supposed to feel toward one another (particularly on the part of our politicians for our people) has been fundamentally stripped away in ethos, to be replaced with abstract and acidically dangerous “corporate responsibility” – to overseas, and to bottom lines. Further, the way in which our state itself can act as one of the most compassionate and powerful tools of safeguard and surety for our citizens – for example, by legislating better outcomes for people by lifting the minimum wage or ensuring cheaper medicines for the sick and elderly thanks to #PHARMAC – is, itself, directly imperiled by the possibilities represented by the Investor-State Dispute resolution portions of the agreement. But most dire of all (and this is how it links back to the Independence of India) … our very nation-hood and national sovereignty and self determination stands – indeed, our fundamental ability to Own Our Own Future – stands under dreadest threat from both without and within.

And that’s not something which either Rolinson Snr. or Rolinson Jnr. are particularly happy about.

But this isn’t just a statement of high-minded ideals setting out the ways in which my father’s contributed to my political ideology and activism.

As applies that “Vision” thing I mentioned earlier … well, let me put it this way. He’s the same age as India, and a Gold Card holder. Going forward down the decades, I reasonably suspect that he’ll find himself steadily more reliant upon the state in his future than he is, perhaps, now. My concern for what agreements like the TPPA – and, far more fundamentally, the failing, flailing governing ideology of Neoliberalism to which our Government subscribes – is therefore not entirely motivated by an abstract desire to see his values immanentized in our creature of state. Instead, it’s very much a personal statement of fret and fear that the state and society which he retires into won’t be nearly as caring or as courageously compassionate as the one which he grew up in. Or, hell, even the one that *I* technically speaking grew up in.

And when you watch someone you care about get older, that matters. I’ve already mentioned PHARMAC, for instance, as one core government service which older New Zealanders disproportionately rely upon that will almost certainly be under serious and severe threat should we sign up to the TPPA. There will, no doubt, be countless other ways in which such an agreement would negatively and perniciously effect his – and, for that matter, my – life going forward.

So as we proceeded down Queen Street yesterday afternoon, I think it’s pretty plain to see why both of these birthdays were fairly foremost in my mind.

In the case of both India and The Rev. Rolinson, first and foremost, as a frightening reminder of that which we might very well lose – our national sovereignty, and all the hallmarks of a caring and compassionate society capable of taking command of its own destiny (via the state) which come with that.

But also, and very much at the same time, thoughts about how those respective pasts – both India’s national moment, as well as the distant echos of the far more self-determined, self-assured, and self-sufficient/assisting New Zealand which my father grew up in – can, well, and should inform our nation’s future going forward.

Because seriously. As the great peoples of India most certainly understood just after midnight on the 15th of August 1947 when their sovereignty was finally and insurmountably enshrined … Sovereignty and self-determination aren’t just pretty words to be bandied about in speeches and high-minded, idealized rhetoric. They’re real, reified concepts with actual, tangible importance both day-to-day and across the decades.

Almost everything we do in an economic sense, a political sense – and yes, even often in a personal sense – is impacted upon by the serious questions our states face when it comes to what, how and for whom we govern.

These things matter. And not simply because I am an ardent and unapologetic #Nationalist. As I’ve hopefully demonstrated by invoking why I was motivated to march, in part, by a concern for my father … the issues of sovereignty and economic justice impacted upon by the TPPA have very, very real consequences for both everyday New Zealanders and our society at large.

So going forward, let’s be inspired by the glorious example of India.

Let us pursue independence and self-determination.

And let us never, EVER voluntarily perambulate the pathway toward the questionably-“post” colonial status of an economically vassalated perishingly pasteurized politically pusillanimous push-over of a pretend nation-state.

In closing … Jai Hind! And a very Happy Birthday to The Reverend Rolinson.

Let’s hope by this time next year, that the TPPA is very much a thing of the past.