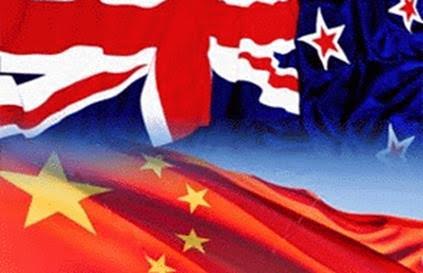 CHINA’S RAPID RISE to superpower status (at least economically) is producing some delicious political ironies. Eighty years ago, Mao Zedong’s communists wrote scathingly about China’s “bourgeois comprador class”. These were the local Chinese capitalists who acted as intermediaries between the Chinese people and the foreign-controlled enterprises and investors then operating in China under the protection of the major imperialist powers (Great Britain, Japan, France and the USA). The expression eventually entered the broader Marxist lexicon as “comprador bourgeoisie” and is defined as: “A section of an indigenous middle class allied with foreign investors, multi-national corporations, bankers and military interests.” The political irony lies in the fact that today’s comprador bourgeoisie is no longer located in China, but in the societies of her increasingly dependent trading partners.

As New Zealand’s largest trading partner, China is steadily wooing our own bourgeois comprador class away from its traditional friends and allies among the foreign investors, multi-national corporations, bankers and military interests of the UK, the USA and Australia. Already, a number of large Chinese banks have set up shop in New Zealand and have thought it politic to recruit both a former prime-minister, and a former leader of the opposition, to sit on their boards of directors. In light of the on-going furore about offshore investment in Auckland residential property, it is clear that this country’s largest real estate agencies must also be numbered among the more prominent members of our comprador bourgeoisie.

The Chinese surnames controversy has also exposed the role played by what might be called “cultural compradors”. The penetration of foreign capital, and the political leverage that goes with it, is only very occasionally accomplished at the point of an imperial bayonet. By far the most common method of establishing foreign influence is by using religion and/or ideology to recruit a local following to perform the role of domestic friends and allies. Such people constitute an invaluable bulwark against any attempt by the opponents of foreign influence and control to reassert national values and interests.

The extraordinary attacks on the Labour Party: the vicious accusations of “racism” levelled against Andrew Little and Phil Twyford; both provide grim evidence of the cultural compradors’ reckless hatred of the bourgeois compradors’ deadliest foe – the national bourgeoisie.

The word “national” notwithstanding, it is the Labour Party which has always represented New Zealand’s national bourgeoisie most effectively. As one of this country’s foremost public intellectuals, the late Bruce Jesson, shrewdly observed: “National knows how to govern for capitalists; but only Labour knows how to govern for capitalism.” The National Party may be “relaxed” about foreign investors pushing the price of a house beyond all but the wealthiest Kiwi’s reach, but Labour, by promising to restrict the rights of foreigners to purchase land, indicates its willingness to put the interests of New Zealanders first.

The University of Otago political studies lecturer, Dr Bryce Edwards, frames the struggle of comprador against national capitalists as a contest between what he calls “Economic Nationalists” and “Global Cosmopolitans”. It’s a neat trick. Rather than dealing with the very hard choices New Zealanders are going to face as the economic and cultural power of China and its local facilitators waxes ever greater, Bryce has simply re-cast the drama as an existential confrontation between ageing patriots, clinging stubbornly to the outdated shibboleths of the nation state; and free-wheeling global citizens of the twenty-first century, possessed of an impressive collection of internationally marketable skills – but no country.

Bryce would also like to cloak his cultural comprador allies in the frayed costume of twentieth century socialist internationalism. He is hardly alone in this. All over the world, the Left is engaged in a bitter debate over whether nationalism can ever be turned to progressive purposes; and if it is still (or ever was) possible to construct socialism in one country. Bryce is, however, wrong to try and smuggle those who would prepare the way for Chinese state capitalism in New Zealand into the honourable precincts of progressive disputation. Cultural compradors, like the comprador bourgeoisie, of which they are part, have no interest in constructing a political space in which the future of New Zealand can be reasonably debated. In their eyes, the future of New Zealand has already been decided – and not by New Zealanders.