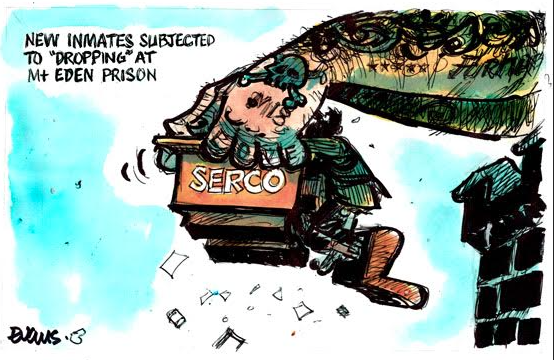 This gets worse every minute.

So now we have allegations of Fight Clubs, Staff betting on fight clubs, Staff turning a blind eye to gang intimidation, beatings, a Prisoner death, a  Prisoner riot and all of it was kept from the Police???

How can one Corporation have this much power to hide a prisoner death from the Police?

Is it because ACC is a 30% shareholder with Serco in the new private prison at Wiri? Does a Government Department dependent on incarceration for revenue set awkward incentives?

When you consider the corruption of Serco overseas and the prisoner abuse they have recorded in other countries – is it any surprise that our experiment is already failing so badly?

National removed prisoners rights to vote so they can’t even change the system they are being doomed to.

Serco and the private prison experiment has been ignored as an issue for too long, it’s time to start asking hard questions now.