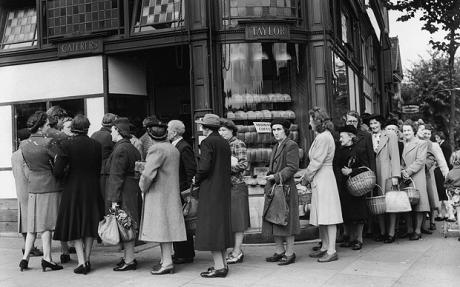 SOME WORDS ENJOY a second lease on political life. Although, it’s almost never the case that a political term retains its original meaning the second time around. The word “austerity” is a good example.

Originally, the word was used to characterise the period in British history immediately after World War II. The Age of Austerity is remembered as a time of economic stringency when food was rationed, luxuries unheard of outside all but the most exclusive circles, and housing was in desperately short supply.

There was, of course, a very good reason for all this. Great Britain had just emerged from a six year war in which, for a few crucial months, the very existence of the British nation hung in the balance. Britain had come through, but not before hundreds-of-thousands of her citizens had been killed or injured, and tens-of-thousands of her houses, factories, ports and other key pieces of infrastructure had been destroyed. To win, the British had been forced to engage in a prolonged period of unprecedented military and economic effort. In attempting to pay for the war, Britain had liquidated nearly all of her financial assets and borrowed heavily from the Americans. By 1945 the cupboard was very bare indeed.

What this meant was that Britain had to manage what meagre resources it still possessed (or could borrow) extremely frugally. Consumer demand was tightly constrained – both by rationing and by continuing the tight wartime economic controls. It was not a joyous time. Life was hard. Indeed, in the fat years that followed, many British people looked back on the Age of Austerity and shuddered.

If you think all these measures sound a lot like the so-called “austerity” policies implemented by the British Chancellor of the Exchequer, George Osborne, between 2010 and 2015, then you really need to think again. Because, historically-speaking, the two periods could not be more different.

In 1945 the British Labour Party was elected in a landslide to implement what they openly described as a “socialist” manifesto. The immediate effect of Labour’s election was that, from the very outset, the “peace” – at least in its early years – was to be a time of social equality. Inherited wealth was targeted quite ruthlessly and the near confiscatory taxes on high incomes that had been levied during the war persisted. The distribution of goods and services was organised not by “market forces” but according to need. For the upper and middle classes this over-ruling of the market was utterly unacceptable. For centuries, the ownership of wealth had conferred all manner of advantages: social, economic and political. But for the first 5 years after the war the upper classes ability to vail themselves of their customary advantages was severely constrained.

There may, therefore, be an element of cruel historical irony in the Conservative Party’s political appropriation of the word “austerity”. Because Osborne’s response to the Global Financial Crisis and the huge debts it had forced the British Government to incur was very different to that of Clement Attlee’s socialists. Rather than sharing the burden of recovery equally, Osborne piled virtually all of it onto the shoulders of the poor and the young. This was achieved by imposing swingeing cuts on public expenditure – especially spending on the unemployed, beneficiaries, students and even, unconscionably, the disabled.

The original Age of Austerity was a time of enforced social equality, Osborne’s austerity was an exercise in looking after the interests of the well-to-do at the expense of the poor. Unlike Labour’s post-war Britain, market forces were in no way restrained and all the advantages of wealth were taken by those fortunate enough to possess them.

The other significant difference between the late 1940s and the post-GFC years is that, in 1945, the world’s great creditor nation, the USA, had to exercise a measure of common sense in recovering the money it had lent during the war. The Red Army loomed over Europe just waiting for poverty and starvation to drive the peoples of the West into the arms of soviet-style socialism. The Americans were careful ensure that the anticipated social and economic collapse did not eventuate.

How different it was after the crises of 2008-09. Governments had been forced to borrow the money needed to keep capitalism afloat and the financial institutions who had purchased the instruments of their own rescue demanded the full repayment of every Pound and/or Euro that they were owed. And this time there was no Soviet threat to moderate the financiers’ greed, or to convince them that unregulated market forces are, politically, their own worst enemy.

Austerity, then, possesses a very different meaning, depending on whether it is being used to describe the enforced social equality of the post-war years, or the punitive imposition of the costs of rescuing capitalism upon those sectors of British and European society least able to bear them.

Greece, according to Radio New Zealand has been issued with an “austere” set of economic demands. Seldom has the true meaning of a word been so carelessly traduced. What is being asked of Greece bears little resemblance to anything “plain and unadorned” unless it is plain and unadorned cruelty.

Between 1945 and 1951 the British learned to live “without unnecessary things”, but they were not forced to starve on their knees so that their creditors could stay on their feet.