When Whaleoil’s advertising salesperson and The Standard are singing the same tune, we have a problem.

They’re arguing that we should end the boycott of TV3 because the workers there will lose their job and there won’t be any news.

That’s pretty weak and I don’t think it respects the mana of the Campbell Live team who fought so hard for us.

Folks, this boycott is hurting TV3, and hurting them badly. Here is one of their Producers begging people to watch them… 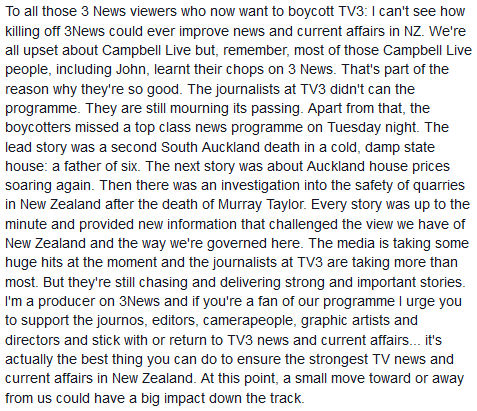 Am I missing aspects of TV3? I certainly am…

…but the self-mutilation TV3 have done themselves by telling us they were sick of Campbell Live’s ‘crusades’ like Novopay, mass surveillance, the Pike River Mine tragedy, child poverty, the misery of Christchurch and that news for them is not a 4th estate responsibility but a mere cynical ratings money game means they must be punished.

Sure TV3 and Mediaworks Journalists have gone into overdrive trying to put out lefty issues over the last 3 weeks and The Nation pick any lefty twitter user to be part of their ‘Twitter Panel’, but management and politics rule at TV3 and the only way to beat them is to vote with your remote.

The simple truth is they the American vulture fund that now owns MediaWorks bought 100% of the company because they intend to do controversial things to the business model and wanted no resistance. It is obvious they will cut TV off from MediaWorks and sell it because it is the Radio Advertising arm of the company that makes any money (this is because radio adverts take next to no production costs where as TV advertising is crucifyingly expensive to produce). That means small business and medium business all spend on Radio leaving only very large advertisers to be able to afford TV advertising, and those large advertisers are rushing away from terrestrial TV to the internet.

Oaktree Capital know this and as a vulture fund will sell off TV, hold onto Radio, boost that up while hollowing out the costs and then on sell it for a marked up price. This is what vulture funds do, they aren’t named after a carrion bird for shits and giggles.

So the sudden howl for ‘won’t someone think of the workers’ seems optimistic. My guess will be that a Chinese media group currently relegated far down the channel rankings will leap at the chance to buy TV3.

Perversely it may be TV3’s current low ratings that keep the station alive before they sell it.

Despite the best intentions of the current Journalists, corporate foreign owned media care about one thing and one thing only, money. If TV3 continues to haemorrhage cash because the ratings are so low, that gives those who believe the Media have an obligation to the democracy they operate in to hold the powerful to account (and not just narrate inane food shows) leverage.

There is a moment here where Australian management can understand they have made a bad call by listening to Walden and Christie and bring the show back.

Having Campbell Live on air before it gets sold is the only way of ensuring a strong voice remains and forces the new owner to accept the value will be in Campbell Live staying.

If you want Campbell Live back and you want to fight this – not only continue to boycott TV3, but get more people to join.

It is the 5th Estate’s responsibility to take over the 4th Estate’s platforms, if that 4th Estate have walked away from their obligations to hold the powerful to account.

So say all of us.