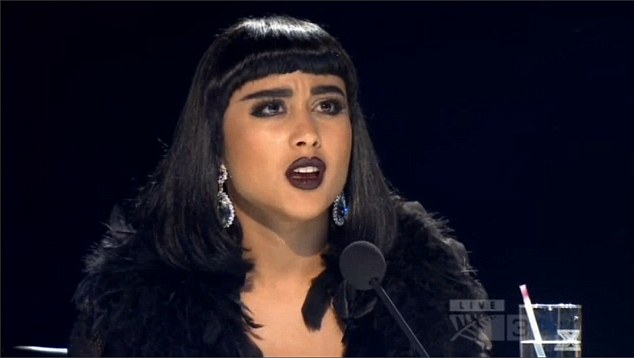 “Was this the nastiest X Factor judge response ever?”

Yeah. It probably was.

When X-Factor judge Natalia Kills, backed up by her hubby Willy Moon, harshly criticised the contestant Joe Irvine a few weeks back, social media exploded with criticism and the evening news in Aotearoa was dominated by Natalia’s actions. Many accused Natalia of engaging in bullying behaviour, and by all accounts those accusations where correct. I cringed as I watched this judge’s tirade against Joe, as an artist and writer it was painful to watch another creative being destroyed in public because I know just how devastating those attacks can be.  Even Simon Cowell recently responded to Natalia Kills’ public attack by calling her “mad” and “hateful” and saying he did not think anyone had gone that far on a reality talent show before. Y’all know it is bad when, even Simon Cowell, the original “Mr. Nasty” thinks what Natalie said was pushing it.

Many people, including our own blogger Martyn Bradbury and many on my Facebook feed have rightfully pointed out that there are far worse things to get upset about than some pompous pop stars bullying and humiliating someone on national television and, of course they are right. At least in the grand scheme of things: the 280,000 kids living in desperate poverty in Aotearoa, the fact we are sending troops to war (again!!!), the brutal attacks on workers rights and the devastating effects of climate change. I’ve written about all of these things, marched against them, protested and spoken out against these injustices and human rights violations, but I also know what it feels like to be bullied and humiliated – both privately and publicly. To have my writing and art ripped apart for no other reason than some shit person decided I was fair game, and it was my turn to be their punching bag. It sucks. A lot!

If you have never been bullied badly, maybe what happened on X-Factor is no big deal to you? Maybe witnessing the artists Natalia Kills and Willy Moon, who have since been sacked by Mediaworks and have returned to L.A, abuse their position of power as judges on X-Factor by verbally assaulting a contestant in a tirade of meanness and accusations of copying  Moon’s style (because, apparently wearing a suit with slicked back hair is super original), didn’t affect you. However, if you have been bullied you know how it can make you feel worthless and like giving up – it can take away your hope. If bullying becomes bad enough it can even take away your will to live.

Whether you think what happened on X-Factor was worthy of the relentless air time it got or not, what is important to note is, Natalia and Willy’s actions speak to a wider culture of bullying in this country. Some of the backlash in response to their actions on social media is evidence of this wider culture. While some used social media to hold these two pop stars who behaved so poorly accountable, it was also used widely with glee by people to ‘take them [Willy and Natalia] down’ reported Catalogue Magazine. Some people even told Natalia to “go kill herself.” Using abusive (cyber) bullying tactics to counter bullying behaviour is a bit of oxymoron – and it is abuse. After all hurt people hurt people, and meeting Natalia’s bullying words with more bullying simply perpetuates the cycle. 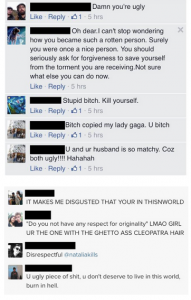 So for anyone who thinks what these two did was blown out of proportion, I have to disagree. And this is why:

Every day a large minority of young people and kids are going to school hoping to god they make it through the day without being verbally assaulted, kicked, punched and alienated by their own peers.  My nephew has a stutter, he is 6 years old and he gets teased by one boy at his school who cruelly mimics his stutter in-front of other kids. The acclaimed spoken word poet and anti-bullying activist Shane Koyczan cites in his book, ‘To This Day’ which is based on his poem of the same name, that “85 percent of bullying happens while other kids are watching.” Last year a group of girls followed my nephew around and engaged in similar bullying tactics. My nephew who takes after me in that he never shuts up, now tries hard to avoid speaking. Bullying can devastate self-confidence.

Many in Aotearoa are yet to wake up to, or care about, the desperate poverty hundreds of thousands are living in, but so often we ignore bullying just as we ignore poverty, just as we ignore the effects of climate change.  Whether we turn a blind-eye to bullying in the work-place or the school ground or wherever, bullies often get away with it because we let them. Because we are scared if we step up and step in, they might turn their venom on to us.  Koyczan in his book also points out that “bullying will usually stop within 10 seconds if someone steps in to help the victim.”

For some reason thousands in Aotearoa stood up to bullying a few weeks ago, utilising social media to express their outrage. Maybe this public display of intolerance to bullying (those who used bullying tactics to express their disgust not included) helped to give some kid who is being relentlessly picked on at school a little bit of hope? School zones are battle zones for some kids  I think if you told any child, my nephew included, who is surviving bullying that “it is no big deal and there are bigger issues to worry about such as poverty”, they might tell you it really, really is a big deal to them. They might even tell you they don’t want to live in this world anymore. Heartbreaking.

Laurie Penny wrote last year for the Guardian “there has been a chilling surge in suicide attempts among [young] people with their entire lives still to live, many of them linked to bullying.” Shane Koyczan, the spoken word poet I mentioned before spent most of his childhood being bullied, suffering relentless put-downs and name calling and physical violence by his peers, which ultimately drove him to contemplate suicide. His anti-bullying poem, ‘To This Day’ speaks to the profound and detrimental long lasting damage bullying has on the individual. He wrote:

we weren’t the only kids who grew up this way
to this day
kids are still being called names
the classics were
hey stupid
hey spaz
seems like each school has an arsenal of names
getting updated every year
and if a kid breaks in a school
and no one around chooses to hear
do they make a sound?
are they just the background noise
of a soundtrack stuck on repeat
when people say things like
kids can be cruel?//

‘Kids can be cruel’, is often said in an attempt to brush off bullying as if it is a childhood rite of passage, as if it is something we should expect and acccept. Yeah, ‘Kids can be cruel’ but so often nothing is done about the cruelty being committed and because of this, this cruelty often creeps insidiously into adulthood as the X Factor case has evidenced.  Cruelty often goes unchecked, therefore being sanctioned by default.

Most commonly bullying that impacts adults happens in the workplace. Bill Bradford, a Lawyer who works for First Union recently reported “There’s actually an epidemic of workplace bullying in this country.” From the school ground to the work place bullying is a massive social problem in this country.  A 2012 study by the Work Research Institute at AUT University found almost one in five New Zealanders had experienced workplace bullying. In the school playground Koyczan suggests “1 in 7 kids has either been the victim of bullying or a bully.”

Statistically, bullying gets worse with age.

Just recently protesters picketed Pak’N’Save Rotorua in response to workers speaking out about a climate of intimation. Bill Bradford reported “More than 70 staff had recently joined the union and when a list of members was sent to management ahead of a meeting under the Employment Relations Act, the owner and his management team responded with a campaign of bullying and intimidation.”

So often when kids are the targets of bullies we tell them to “stand up to the bully” (which is a terrifying request if you think about it) and we tell adults who are being bullied to “grow a rhino skin” or use some clinched positive affirmation like “chin up”, these are all a thinly veiled form of victim blaming no matter how well meaning and unaware the gesture might be. We are simply minimising for our own comfort. Thus, telling people who speak out about being bullied that there are bigger problems in the world like poverty (because other people have it so much worse), amounts to minimising langauge.

Telling someone who is surviving abuse – and bullying is a form of abuse and violence – to, “toughen up” or to “harden up” isn’t helpful. The person who is surviving bullying should not have to change their behaviour or reactions to bullying, it is the person engaging in bullying behaviour who needs to be constructively challenged and told to change their behaviour. They are the ones who need to be told to be “more compassionate”, so often our society has it  terribly backwards in response to bullying.

Whether it is politicians, such as National’s Paula Bennett, bullying their own citizens who are living in poverty through welfare cuts and poverty shaming rhetoric, managers belittling their staff members and intimidating them, kids in our school grounds surviving relentless torment by their own peers, or two pop stars ganging up and verbally abusing a contestant on some talent show, ultimately all of these types of behaviour (regardless of the context) are designed to humiliate and dehumanise. It all matters. We should give a shit about bullying, and put our collective energy into eliminating it everywhere it exists, from the playground to the workplace, to parliament.