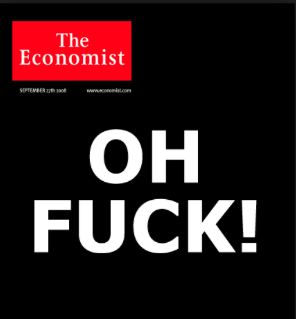 Normative economics is the economics of value‑judgement and belief. It’s neither social science nor art. It is culture, and culture is a mix of good and bad. Sixteenth and seventeenth century western culture gave us witch burnings, religious wars on a scale that makes Jihad Johnny look not so bad, global circumnavigation, the rebirth of science, double-entry bookkeeping, and some quite impressive art.

Journalists are people who generally share the same cultural beliefs that most of the rest of us cherish.

Politics is meant to be normative. We vote for the people that say they will do more of what we think is good, and less of what we think is bad. Economics however is not meant to be normative; it’s meant to be scientific. Scientific economists may be able to prescribe a means to increase economic growth. But they cannot say that increased growth is always good. They can say that more growth is good if the benefits of more growth are greater than the costs of more growth. But they cannot easily measure those benefits and costs in any scientific sense. Politicians can argue that the benefits of some policy may be greater than the costs, but only because it is their job to apply value judgements, and because they stand to lose their jobs if the net benefits of their policies are not apparent to their employers.

To get quick comparative economic information I often go to a ‘journalistic’ website – www.tradingeconomics.com – that, like Wikipedia, is convenient. But it’s a double-edged sword to unleash on students. Brief commentaries that come with the statistics are infused with normative interpretations.

What is most scary is the use of Excel-style formatting, using shades of green shading to indicate ‘good’ and shades of red to indicate ‘bad’. Let’s look at some of the good. (We note of course that these stats are updated continuously so the numbers I give here may not be the same for you.)

On inflation, the higher the number the more bad the statistic is painted. Conversely, the lower the number the better the statistic is painted. The winner of the 2015 inflation award is [drum-roll] … ‘Syria’, with -29% (ie 29% deflation). A distant runner-up is Lebanon, followed closely by Rwanda, Greece and Somalia. (Reserve Banks know better of course than the authors of Trading Economics about the huge dangers of deflation. But, as we will see, they have no idea how to prevent deflation. The alleged links between money and inflation fall well into the camp of culture; not the camp of science.)

The United States is in annual deflation now. Its inflation is falling as its economy returns to significant growth and high spending. Definitely not what the textbooks claim should happen.

A given inflation rate is neither good nor bad; it’s only high or low. Under normal circumstances steady inflation of two or three percent a year is probably ideal (though anything above two percent is shaded red in Trading Economics). But under contexts of huge credit-debt imbalances, somewhat higher rates of inflation are needed to stabilise the financial ship.

Top five for economic growth are currently South Sudan (13.1%), Sierra Leone (13%), Ethiopia (10.4%), Turkmenistan (10.3%), and Ivory Coast (9.9%). I could happily visit Ethiopia or Ivory Coast, though their unemployment rates of 17.5% and 15.7% are worrying. Not so sure about the others though. Is Sierra Leone growing due to the expansion of medical services? Its unemployment is just 3.4%. Possibly it is in part because the medical services are not restoring enough sick people to labour force status.

On interest rates, high is treated by Trading Economics as good; low as bad. Switzerland and Denmark share the booby prizes here, each with interest rates of -0.75% (yes, minus). (Both have deflation, in part I would argue because their interest rates are so low.) Winners, at over 20%, are Belarus, Malawi, The Gambia, Argentina, and Ghana. Russia is on 15%. Sierra Leone is at a comparatively low 10%. Belarus (0.5%) is just pipped by Cambodia and Qatar for the lowest unemployment. High interest rates appear to be doing some good in Belarus!

On government debt to GDP, Japan is easily the most red, though Greece is catching up. For Japan, high government debt is a solution, not a problem. That debt is easily serviced, even if it is technically a Ponzi scheme. There is no deceit involved. Japanese savers like to lend to their government at near-zero interest rates, happy in the knowledge that the Japanese government has no difficulty attracting funds. Greece could service its government debt also, if the rest of the Eurozone countries allowed Greek incomes (and therefore taxes) to grow. Five years of austerity has achieved nothing. Austerity policies are based on belief (ie on culture), not science.

The western countries with the lowest government debt (as a percent of GDP) are, as we should expect, the ones with the highest private sector debt. Estonia is a particularly good example. New Zealand and Australia have low government debt for similar reasons. New Zealand’s is the same as Switzerland’s, though for different reasons.

On the government’s Budget balance, green shading is awarded to countries with governments running surpluses. Not surprisingly, four of the five biggest surplus governments are small countries with lots of oil. Then there is the Republic of the Congo [Brazzaville, not Kinshasa], running a 12.1% government surplus. For the government of such a poor country to have a government that so miserly is a huge shame. Public thrift on this level is what cost Romania’s Nicolai Ceausescu his life on Christmas Day in 1989.

The austerity countries of Europe continue to run much larger Budget deficits than most countries with relatively free spending households; countries such as New Zealand and the USA.

The current account of the balance of payments is always a strange one to make normative judgements upon. Many people believe that all countries should run current account surpluses year-after-year. It’s logically impossible of course. If spending is less than earnings in some countries then by definition it must be more in other counties. The economic problem is supposed to be the finiteness of goods and services. Yet it’s the deficit counties who have eased this problem, by spending more than they earn with the full and ongoing encouragement of the countries which earn more than they spend.

To any economic commentator with some appreciation of the zero-sum constraint, success here (on the balance of payments) is scoring close to zero. Yet Trading Economics gives the big green to the high surplus countries; countries with oil, and with the most miserly people on the planet. In the latter category come Macao, Singapore, Switzerland, Taiwan, Netherlands, Germany, Denmark and Sweden. And Ireland, which has embraced personal austerity much as St Paul was converted by God’s light on the road to Damascus.

To finish, I would like to comment on “Uncharted Waters”, by journalist Patrick Smellie in the NZ Listener of 7 February 2015. He says “we live in strange times”. Too right, given my account above. Then he say the US “central bank threw trillions of dollars of made-up money” to reignite the economy. What other kind of money is there, other than “made-up money”? Except for miniscule amounts of coin, money is all made-up by double-entry bookkeeping. The main reason, initially, for central banks (rather than commercial banks) making-up lots of money was to support asset prices. There would be sufficient means to buy assets for sale for something comparable to the prices the owners of those assets paid for them. Later on ‘Quantitative Easing’ (QE) was undertaken by the monetary authorities to get people to borrow and spend, even when the governments of some of those countries were asking people to save more and spend less. Finally (and especially in Japan), QE was done in an attempt to create inflation.

QE has had precisely the opposite effect to the effect most normative commentators had expected. It is in our cultural DNA to believe that more money means more inflation. Indeed Japan did get some inflation (2.4%), thanks to a big fall in the Yen. It’s now a cheap country to visit, and to eat in. But for the world as a whole, low interest rates are reducing production costs, and are substantially reducing the sizes of dividends that company owners are demanding. Cheap easy money is taking us into, as Smellie says, “uncharted waters”. (Well, not really unchartered to those who know their history of the seventeenth and nineteenth centuries, and the early 1930s.)

Smellie goes on to say that “cranking-up the money-printing presses” creates “vast new debts that only future generations or … inflation can hope to cure”. Sure the future generations are in increased debt to themselves, it’s the nature of double-entry bookkeeping. (Smellie does not say who he thinks the young ones are in debt to.) Is it a huge problem to be in debt to oneself? The journalist only looks at one side of the ledger, and sees a problem that isn’t there. (He’s right though, that inflation can render solvent an otherwise financially insolvent world.)

Further on Smellie notes: “households and businesses are savers now, rather than spenders, a huge shift from a decade ago … governments [on the other hand] may not be able to control their debts …”. First, the truth is that in most of the capitalist world households and especially businesses were savers a decade ago. It’s just that the scale of private saving increased substantially this decade over the last.

Second, Smellie’s use of the words “may not” reveals that he does not understand the basics of borrowing and lending. The correct words are “can not”. If you divide the world into two parts, private and public, and if the private part is saving (running surpluses) then the public part must by definition be dis-saving (running deficits). It’s a global ‘zero-sum game’, no matter how much we might believe or wish that it isn’t. Thus governments can only run surpluses when the private sector runs deficits. Austerity cannot achieve its goals; it’s a logical impossibility. Thus Estonia and New Zealand have low government debt and high private debt. Greece has high government deficits precisely because its private sector is being forced to save. When the private part is in surplus, the public part must be in equal deficit. As Margaret Atwood noted in her book Payback, debtor and creditor are “joined at the hip”.

Let’s have more science, and less superstition, in our economic discourse. Emphasise the positive, not the normative.