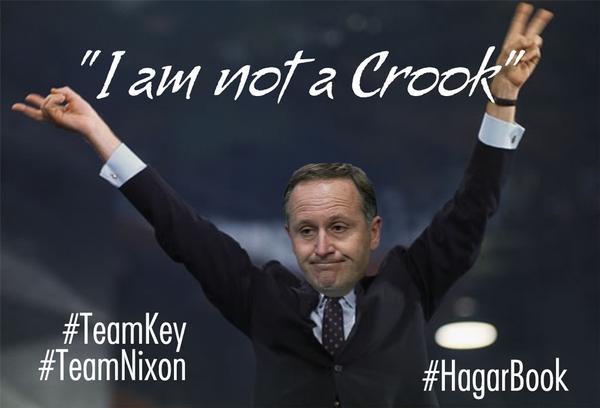 Just so that we all understand what’s been revealed. The Prime Minister’s Office used the Secret Intelligence Service to falsify classified information to smear the Leader of the Opposition via a far right hate blogger months before an election.

In other countries, they call that a coup.

What has just happened here? The SIS helped smear the Leader of the Opposition with falsified information and it was launched out of John Key’s Office just before the election???

Ummmmm. Doesn’t that kinda look like a coup? The State Intelligence Apparatus falsifies information about the Leader of the Opposition months out from an election via a National Party affiliated hate blog.

Are we so laid back that you can get away with a Coup and NZers won’t notice until 2 electoral cycles later?

Are we so inoculated by the myth that we are corruption free that we don’t actually recognise it when it is smiling and dropping clunky one liners right in our face?

Key grants the security services vast new powers and budgets, the SIS provide the PMs Office with a falsified smear on the Leader of the Opposition. Both of these things have happened, the question is which one happened first and is that the price of the Deep State?

What the bloody hell is going on here?

If we take Key at his word that he didn’t know about any of this, and I mean, if we can put aside the fact Key rang Slater regularly and was also the Minister in charge of the Spies, if we put that aside, plus all the evidence of it being operated and initiated out of his Office, EVEN IF we give Key all that, it means he was grossly incompetent to the point he needs to make an apology to the Nation, not just Phil Goff.

This is either breathtaking negligence on behalf of the Prime Minister, or it is what it looks like – the Secret Intelligence Service and the PMs Office trying to actively rig an election.