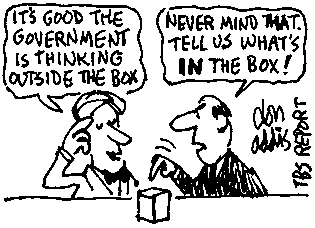 The Ministry of Education yesterday released another batch of information relating to the five existing charter schools and the four new ones proposed for opening in 2015.

As we have seen before, the release of such information, often requested under the Official Information Act, was incomplete and continues to make a mockery both of the OIA itself and the rhetoric that processes relating to charter school will be transparent and subject to scrutiny.

On 12 June 2014 I lodged an application under the OIA for the “Readiness Reviews” conducted by the Education Review Office of the five new schools which opened in February 2014.

A Readiness Review, as its name implies, is supposed to be ERO’s view of the state of a new school’s preparedness to open its doors to students.

At the completion of the normal 20 working days OIA time limit, the Ministry of Education wrote and stated that the Readiness Reviews of four of the schools were “soon” to be made publicly available and so my request was refused on those grounds. They also made this statement about the fifth

“The Readiness report for Te Kura Hourua ki Whangaruru has not been completed. Te Kura Hourua ki Whangaruru has faced a number of challenges, as schools often do when they first open. All of the identified challenges have now been overcome or are being managed. For this reason, the Ministry and ERO have agreed that the review period be extended until the end of August 2014 with a final report in September 2014. Extending the review period allows a fair and reasonable opportunity for the Sponsor to address the issues and demonstrate its capability to operate a successful school.

Subsequently, on 6 August 2014, the Ministry released to me the four completed readiness reviews for the other schools.

After a wait of over 3 months, the Ministry finally contacted me again:

“The ERO Readiness Review for Te Kura Hourua ki Whangaruru is not included in today’s release. We are withholding this document in full under section 9(2)(f)(iv) of the Act to allow time for some issues to be addressed. The school is in the process of responding to the delayed review. Once it has done that, the report will be released.”

In my view, there are several unanswered questions that come to mind when this saga is analysed.