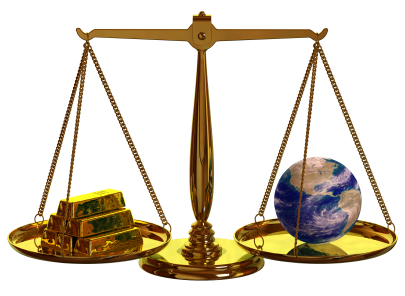 At the recent G20 in Brisbane, member countries agreed to accelerate growth to an additional 2% on top of current trajectories. But ongoing public sector cuts, asset sales, and reducing workers’ rights indicate that at least part of the growth model is at the expense of the workforce, public investment and the environment.

Economic growth is the unquestioned solution to unemployment, deficits and even world hunger. It wins elections for politicians. It helps us pay off our debts and gives young people jobs. So how come we’re all even more indebted, the gap between the rich and poor has widened, and living standards for many have declined?

There’s a saying that infinite growth is the ideology of the cancer cell. Anything that just keeps growing will ultimately suck its host dry. Unlimited growth and a finite planet can’t coexist. We’re already seeing the limits to growth with depletion of resources and intolerable pollution of sinks. Despite the hallowed status of the growth objective, it’s not benign or benevolent in its effects. Growth doesn’t necessarily lead to a more equitable society or an equal distribution of benefits for all. There are many problems with “growth” per se, that lie beneath the surface.

For a start, there’s a democratic problem with the G20 pursuit of a +2% growth target – the nation state becomes more beholden to international peers and the global capital system than to its domestic electorate – as we see with the TPPA.
To support the growth model we have to consume more. That’s economically unsustainable since growth plans don’t include higher wages or the creation of quality jobs. But it’s also environmentally unsustainable to dig up limited resources to ‘stimulate the economy’. Growth depends on creating markets for stuff we don’t necessarily need, with resources we can’t sustainably expend, using money we don’t have. Emerging markets are expected to ‘buy into’ the growth dream – as producers and consumers. That effects domestic policies, cultures, ecologies, economic conditions – and usually not for the better.

Some of the G20 members made concessions to helping developing countries tackle climate change at the Brisbane meeting. But a fossil fuel based, growth economy is actually incompatible with addressing climate change, or any other sort of pollution or planetary degradation. The way economic expansion is shackled to energy use, more growth can only exacerbate environmental damage. Short term growth targets prevent governments and industry from thinking long term in the interests of a more sustainable model or more sustainable investments and manufacturing.

And of course more growth won’t automatically lead to a more equitable society just in itself, as we’ve seen from recent history. If the spoils of growth concentrate in the hands of the few, societies become more unequal, not less. A rising economic tide won’t just automatically raise all ships to the same extent. More growth doesn’t equate to more public good. After all, there is already enough food, wealth and resources to satisfy world hunger – it’s how its controlled and distributed that causes poverty and starvation. And even for the wealthy, more money doesn’t just lead to more happiness or wellbeing.

The challenge is to find a compelling alternative ideology that offers the apparent benefits of growth, without the unsustainable economic, social and environmental costs. But we won’t find that from any contemporary western state where the interests of growth and capital are incorrectly seen as intrinsically linked the interests of all.