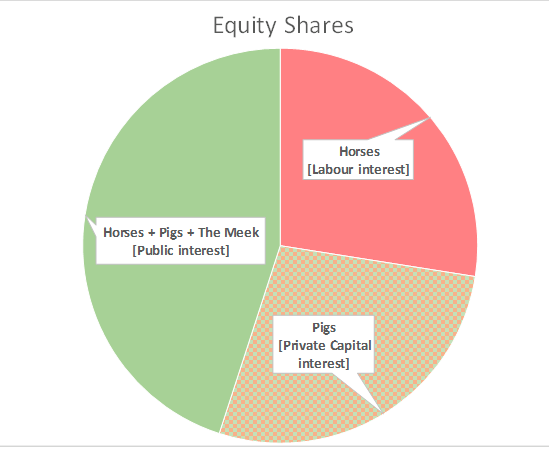 Last week I used the word ‘equitarian’ as an adjective for a distributional system based on equity; much as a person who believes in the primacy of liberty might be classed as a libertarian. I was somewhat alarmed to find, from comments raised, that some people use the word equitarian to mean ‘equine veterinarian’, a shockingly narrow use for a big-picture word.

Fortunately both my quite new hardback dictionaries (Oxford and Collins) did not have the word ‘equitarian’ at all, so ‘equitarian’ is a word that can be used in non-horsey ways. Indeed, following a google search, I found the word ‘equitarian’ has been used in number of different ways; variants based both on aequus and equus. One of the latter meanings was a combination of equine and humanitarian. But the oldest reference, from the 1880s, clearly derived from aequus.

Equitarian is the most accurately nuanced word available for the philosophy that underpinned our political consensus in and around the 1960s. It relates to the economic concept of horizontal equity – that equals should be treated equally – that is supposed to underpin the principles of taxation. And it relates to the concept of equity meaning ownership; as in the portion of a person’s house that they actually own, and as in company shares.

I considered using the word ‘egalitarian’. But it falls short in both its vagueness and its leftness. (Another word, ‘equalitarian’, comes across as hard-left; ‘communist’ if you will.) The equitarian concept that I am trying to convey is neither of the left nor of the right. And it’s a concept that either a centre-left or a centre-right party could use to break out of our narrow intellectual confines.

There’s plenty of good writing from the 1930-80 period that operates from completely different sets of assumptions than those that prevail today. In general, we can only place contemporary ideas in context if we become familiar with writing from other epochs.

Please note that the word ‘citizen’ is one that should be used with special care. In a neoliberal context, there is a strong subtext of two-tier citizenship, as there was also in the 1920s (for example). There are the deserving top-tier citizens and the undeserving lower-tier citizens. Our political discourse today simply takes that distinction for granted. Thus, it’s easy to assume – through lazy thinking – that poverty is symptomatic of having made poor choices. Indeed that’s why we emphasise child poverty so much; we exempt children from the requirement to earn top-tier citizenship through having made the ‘correct’ choices about such things as working, saving and investing. Publicly-sourced payments such as ‘in-work tax credits’ are a reward for having made the ‘correct’ top-tier choices.

From an equitarian point-of-view, citizenship equates pretty much to the concept of tax-residency. The only persons in New Zealand (other than minors) who are not full citizens are persons who pay tax to other jurisdictions. Thus citizenship is a very broad concept, and, all citizens are equal in the sense that the public equity of one citizen is precisely equal to the public equity of another citizen.

In the equitarian 1960s, this was largely assumed, rather than written in some constitutional tablet. But the key idea was that we paid taxes at ‘highish’ rates, and we all received something back in return, albeit in different forms and in different (often arbitrary) amounts. This ‘something back in return’ – which may have been a tax exemption – can be described as a public equity benefit.

It is now time to formalise this equitarian concept. In a formalised equitarian system of distribution, public equity benefits become public equity dividends; an equal division of the public component of the national income.

Given the alternative meanings of ‘equitarian’, we can even use horses (and other animals) to illustrate the different interests that must be rewarded in a country’s national economy.

The chart below shows an economy divided into its three ownership interests: labour, private capital, and public. In a nod to George Orwell’s Animal Farm, I designate the labour interest ‘horses’, and the interest of private property as ‘pigs’. In our example, the pig income share is equal in size to the horse income share. However, because any economy has many more horses than pigs, the average horse share is much smaller than the average pig share. Together horses and pigs make up the private interest.

The public interest represents all of an economy’s resident population equally; including all horses and all pigs. In addition, and in deference to The Gospel According to Matthew, the remaining public who are neither horses nor pigs – the meek (who shall inherit the earth) – each have the same equal stake in the public interest.

In our political consensus, the majority of people are either horses or are morally bound to be horses. Yet the actual horse income share is less than 30% of the pie, and shrinking as productivity increases. It is completely impossible to create less inequality by having more people compete for the falling labour share of national income.

Normal economic growth means to ‘grow the pie’ by raising productivity. This means reducing the horse share of the pie, but (maybe) maintaining the absolute size of the horse share. Horses get a smaller share of a bigger pie. Inequality increases, as does relative poverty, but absolute poverty most likely will not increase.

It is possible for the economy to grow while increasing the horse share; but this would mean either a diminution of productivity or unsustainable input-driven growth. If our only vision of poverty‑eradication is through paying more people more to produce and sell more stuff, then we are very short-sighted indeed.

I would like to enunciate a green-left vision, while noting that the New Zealand Green Party has no clear vision of an economy that incorporates low (or even no) growth, higher productivity, and less inequality.

First we note that the public share and the pig share are both equity-based. We are looking for a way of establishing welfare, at its core, as equity payments (rights) rather than as transfer payments (gifts).

The pig share is divided unequally on the basis that persons with property hold unequal amounts of private equity. Nevertheless two pigs who hold identical private equity portfolios gain exactly the same portion of the pig income share. (Contact Energy doesn’t distinguish between deserving and undeserving shareholders.) On this equity basis and by definition, everybody owns equal portfolios of public equity. Hence, as of right, income distribution within the public income share should be exactly equal.

The other important point is that private capital income (profits) is either retained or distributed. Companies with powerful executives tend to retain as much of their profits as they can get away with, leaving as little as possible to be distributed to their private shareholders.

Everyone holds an equal share of public equity, and their shares of public equity cannot be bought or sold. Otherwise we should apply the same distributional rules to public equity as we apply to private equity. Thus whatever inequalities occur on the private (right-side) of the pie chart, the left side of the chart is, in principle, perfectly equal.

The issues then relating to the left (public) side of the chart are: (1) that the public share is correctly accounted for; (2) the extent to which income derived from public equity is retained by the executive (government) or distributed to the people; and (3) the proportionate size of the public share.

So my green vision of income growth is essentially that of rising productivity through a falling labour share matched by a rising public share. This reflects the fact that it is increased or improved collective inputs that are the main drivers of productivity growth and hence higher living standards.

The third part of my green vision is that we properly account for the public equity (green) share; rather than persistently understating this income share in our system of national accounts. The only equitable tax is a flat tax; ie a proportionate tax. Now people on the political left tend to distrust the phrase ‘flat tax’. They shouldn’t. Flat tax is the left’s salvation; just not a low flat tax.

If we properly account for our present income tax as a flat tax of 33 cents in the dollar, then the public income share must be 33% of GDP plus revenue from indirect taxes plus profits of publicly owned companies. In total that would be about 45% of GDP; 45% of the pie. By using this simple and equitable accounting method, a person (horse!) receiving a salary of $100,000 would gain $67,000 out of the labour share and $9,080 from the public share. A person with onlya benefit – or New Zealand Superannuation – as income (one of the meek) would receive the first $9,080 of that benefit as of right from the public share, and the remainder as a transfer gifted from the retained part of the public share.

By adopting any of the tax scales suggested in previous postings (here and here) the public equity dividend of $9,080 would be higher. By adopting the suggested ‘Labour’ or ‘Green’ tax scales, the flat rate of tax would become 36% or 40%. These are rates that the political right would not like, but which I believe do represent an appropriate apportionment of total income, given the contribution to productivity of collective inputs.

Once we do this proper accounting of the public interest, and tweak our tax rates to better reflect such accounting, then the issue of having both increasing productivity and decreasing inequality is resolved quite easily.

The biggest single problem that we face is that people with social justice sympathies – ie people who emphasise the importance of the public share – are too few, and are distrustful of accounting. The other problem that we face is that the political left is divided between those (horses) who emphasise the dwindling labour private interest, and the meek who (when they are not being meek) identify principally with the public interest.