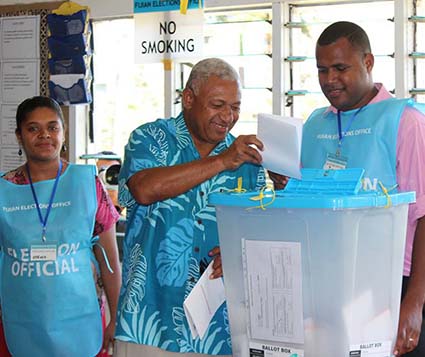 WHILE the results are provisional at this stage, it is clear today that the people of Fiji have given coup leader Prime Minister Josaia Voreqe Bainimarama a democratic mandate.

His Fiji First party was polling way ahead of the opposition Social Democratic Liberal Party (SODELPA) at 6am this morning when counting was suspended until later today.

With 1244 of the 2025 polling stations tallied by the Fijian Elections Centre, Fiji First with a multicultural policy of “Fiji for all” had 233,094 votes, or 60.2 percent of the total vote – more than double the indigenous party SODELPA, which represents the political group ousted in the 2006 military coup.

What do the results mean for Fiji? A clear majority of the population have embraced Prime Minister Voreqe Bainimarama’s vision and ideals for Fiji, rejecting discrimination and the “politics of the past” to give him and his party a democratic mandate after nearly eight years of military-led rule.

Bainimarama’s restructuring of the psyche of Fijian society has been given the stamp of approval by Fiji’s voters.

Now he will operate within the mechanisms of a parliamentary system that he and his right-hand man Attorney-General Aiyaz Sayed-Khaiyum have crafted for Fiji.

The results show Fiji First way ahead of its main rival SODELPA, with a landslide towards Bainimarama.

SODELPA leader Ro Teimumu Kepa will most likely be the leader of the opposition.

“It’s been a long time coming,” said an emotional Tabuya, who is also contesting the elections.

“I think we should all celebrate this day, no matter what the outcome. And I’m just really grateful for a beautiful morning, and for being able to finally exercise my right to vote.”

After visiting several polling stations in the Suva and Nasinu areas, Tabuya described the overall mood of polling day as one of seriousness – a stark difference from Fiji’s past general elections.

She said it was more of a sombre mood, “like one of silent solidarity”.

“Rather than one of lots of noise and lots of laughter, I think people are taking this day very seriously,” said the former University of the South Pacific law lecturer.