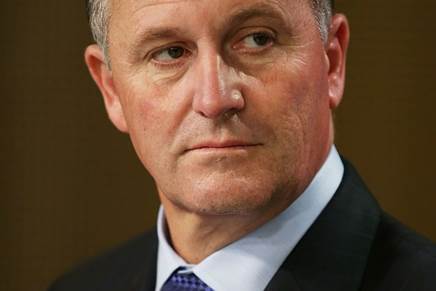 “Dirty Politics” has achieved more than simply revealing  unwholesome machinations between National party apparatchiks, ministers, and halfway-insane right-wing bloggers. The book has explained the nature of Key’s seemingly “Teflon” nature. The secret is revealed; the mystery is stripped away; and now, when Key is confronted by a media pack, the brown smelly stuff is sticking to him.

Two days later, I repeated my belief that Key’s seemingly air-of-invulnerability had been swept away;

The Teflon Man is no more. He has been terminally weakened by his own ‘kyptonite’ – truth.

My perception of Key’s new status as just another garden-variety politician has been born out by this extraordinary exchange between TV3’s Lisa Owen, and our soon-to-be replaced Prime Minister;

Until 7.05, the rather routine discussion between Owen and Key centers around National’s options to govern, post election. Coalition options and minority government are discussed, and Key confidently handles each scenario thrown at him by the host.

At 7.05, however, matters take a turn for the worst for Key when Lisa Owen raised the subject of child poverty and asked Key,

“One of the big issues this election has been child poverty. And you have said, just last year, you said ‘we are proud of the government’s record  tackling child poverty. Do you stand by that?”

“I absolutely I do.”

At Owen’s further questioning, Key responded by saying that he was proud of his government’s track record in dealing with child poverty.

Owen then lobbed this “grenade” at him, namely a quote from John Key himself, reported  in the Sydney Morning Herald on 6 September.

“Our opponents say more children are living in poverty than when we came into office. And that’s probably right.”

This frank admission runs counter to ever line uttered by Key, Paula Bennett, other National ministers, right wing commentators and bloggers, et al. In fact, with four simple words, Key has effectively demolished his own government’s insistence that child poverty has been reducing over the last six years. Crosby Textor’s spin doctors must have collectively moaned in despair when they read that comment.
From this point on, Key squirmed uncomfortably as he tried to wriggle out from this admission to the Sydney Morning Herald – including at one point revealing his frustration by  blurting out (@ 9.15),

Owen persisted challenging Key as he tried to wiggle out of his SMH comments – but she would have none of it.
For possibly the first time since Stephen Sackur interviewed Key on Hard Talk in May, 2011, this was a moment when our Prime Minister faced serious hard questioning and was not allowed to wriggle his way out with nonsensical, glib answers.

Since Nicky Hager’s revelations and the sacking of Judith Collins, Key’s preternatural teflon-shield has been stripped away. He is now just another politician, and if by some miracle he successfully leads the next government post 20 September, he will find  his interactions with journalists becoming harder and harder.

It may not be what he says that lowers his esteem in the public eye. It will be the way he says it.

Lisa Owen was simply the first.

The Rise and Fall of John Key – who will be the next Leader of the National Party?