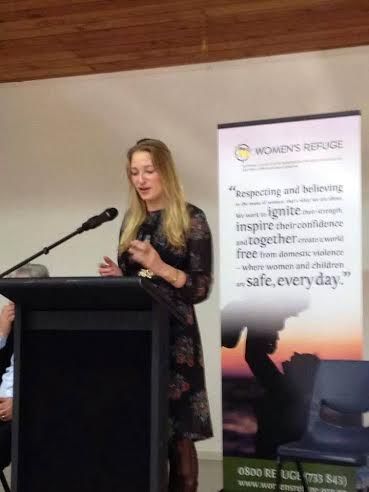 Yesterday’s NZ Women’s Refuge Symposium brought together community workers from the front lines, advocates against physical and sexual violence and others concerned about the high levels of gender-based violence, the persistent pay gap, child abuse and effects of inequality on our women and children.

Minister Bennett opened the panel and her speech was as you would expect, so therefore not much to write about here.

David Cunliffe’s address though, that is worth mentioning. It was one of the most impassioned, beautifully thoughtful and honest speeches that I have ever had the privilege to witness. Sitting beside him on the stage I was close to tears, along with most of the audience. Labour’s policy I won’t get into, though it is great that they have pledged extra funding to an issue which is painfully under-funded. It is especially notable that Labour are committed to making this a cross-party priority and he will take personal responsibility as the Prime Minister for the initiative. Thank you David.

However, the focus of the media’s reporting was on Cunliffe’s “I’m sorry for being a man” comment that he made off the cuff as a heart-felt response to the kaupapa of the day. The #NotAllMen spin that has been put on it has derailed the potential for a real and honest conversation about gender-based violence that must happen in this country.

I am often frustrated by the obvious bias of the NZ Herald and Stuff.co.nz, but yesterday’s tabloid style journalism made me furious.

If you were a Prime Minister or indeed a (hu)man of any integrity, you would have instead said something like “His message is essentially right. New Zealand has a large problem to tackle and we need to work on this together”.

But because you are always so keen to ridicule and undermine your opposition, you have also ridiculed and undermined the victims, the problem and the people working to find solutions to it.

Your Minister for Social Development highlighted the arrogance and dismissiveness of your government yesterday. After her own presentation she sat beside me on the stage texting and surfing the net on her phone while other parties’ representatives spoke.

Aotearoa New Zealand has so much potential. We are a diverse people in a unique setting and have a proud history of inventiveness and community spirit.

Women won the vote here first. We invented the welfare state. We stood up against nuclear testing and Apartheid.

We have led progressive change as the social laboratory of the world.

But now, 121 years since the vote, we are drifting.

We are all here today because we are worried about the impact of this on women and children.

We are concerned about the persistent pay gap between men and women; that we are ranked the worst for domestic violence in the OECD and nearly a third of we women have experienced physical violence from a partner; that women are grossly underrepresented in in corporate and public governance; that 280,000 children live in poverty, that inequality and financial stress have increased violence against children, and of course that the voluntary sector and agencies such as Women’s Refuge are struggling against the deluge.

There will be a variety of solutions proposed today, some of them will likely be very good ones.

But there is an elephant in the room. It is a fundamental set of values around young people and women, and the failure of leadership vision.

30 years of neo-liberalism has permeated public and private values and approaches to relationships. We must work collectively to change that at the individual and social level.

Yesterday I heard lawyers and welfare advocates, including Women’s Refuge, say that they have fundamental doubts about the measures announced by the National Government aimed at reducing family violence.

I also heard that the Government did not consult Women’s Refuge about the Family Violence Package. This is disgraceful. When governments make policies they have to call on the experts! We need strong evidence to back up our policies. Organisations such as Women’s Refuge have that evidence.

Organisations that receive government funding should be empowered to critique the government.

We should support and expect the voluntary sector, community organisations and tangata whenua with their expertise to be a powerful voice and tool for social change.

Public funding should not be used as a tool to shut down dissent.

We are not born into equal opportunity, life can be a lottery, there are external factors at play and all beneficiaries are people.

For the last 6 years Minister Bennett, you have used the vast resources of the state and the expertise of the Ministry of Social Development to advance the narrowest of agendas.

That resource has been stuck looking for ways to micro-manage the lives of beneficiaries, rather than to transform them. What an appalling waste of money, and what a narrowing of the potential for the public service to work with the community, and these people, many of them women and children, in a positive way.

Your government shames those who rely on the benefit. You shame the victims. You shame vulnerable children for the decisions or situations of their parents.

You may not shame victims of domestic violence explicitly, but they are blamed implicitly, particularly if they are from lower income situations, or where substance abuse might be a factor.

We don’t have the second highest number of teenage mums because we have the DPB. We have it because we don’t have good jobs or a society that provides real and meaningful alternatives to young women at the margins. Whole regions of NZ have been written off, especially predominantly Maori regions such as Te Tai Tokerau – there has been a total failure to have resourced and supported economic and social development in these areas.

It’s a lie that we are going to fix welfare by micromanaging beneficiaries. You have fundamentally failed to address this.

We all here know that we cannot move forward unless all of us move forward together. That will take a fundamental shift in thinking and action.

As a young woman myself, I represent a generation that has been born into a New Zealand shaped by the economic reforms of the 1980s. We have been fed a diet of individualism and competition, and inequality which disproportionally affects women and children. Politicians and policy makers must ask how does this new generation see the world and how will we take power in it?

Spot the difference between myself and my colleagues up here on this stage. I am new and unknown. I am not a leader of a party, nor am I a Cabinet Minister.

This is kind of the whole point of the Internet Party – we are walking the talk and promoting young new leadership. My own leader Laila Harre is in the audience supporting me as a mentor and teacher, and I stand here with the blessings of Hone Harawira. They actively support the transference of knowledge, experience. That is because it is MY generation that will live through the next 70 years. Our lives will be defined by the decisions we make now.

That means we must throw off the constraints of the last 30 years.

In 1984 our country had this beautiful opportunity to take the enormous momentum of the women’s liberation movement and turn it into an equality agenda. The reforms of the new right demolished that chance and shut down the development of truly progressive policy.

Instead of me seeing, in my lifetime, really fundamental moves towards true and universal equality, I have seen progressives forced into a defence of the status quo.

I could probably count on one hand the progressive policies for women that have been brought in over the last 30 years – parental leave and then paid parental leave, the Relationship Property Act, rape law reform, domestic violence legislation. All good things, but we could have done so much better.

Neo-liberalism has increased inequality and done its best to silence our dissent.

If the last thirty years had not been stolen from us, what could we have done in that time?

We could have transformed families and communities by valuing women’s paid work properly. Decent jobs for both women and men would have changed gender relationships at home too. We could have had a massive social project to promote the sharing of paid and unpaid work, instead of picking up the pieces in families beset by unemployment, low pay and the collapse of community and whanau support systems.

The Ministry of Women’s Affairs wouldn’t be an apologetic tool for the status quo, but an empowerment agent – helping women to collectively organise and change things in a fundamental way.

Imagine if things had gone differently in 1984 and we could have had an equality agenda realised? How different might things have turned out?

These changes we speak of – we’re not going to be able to make them incrementally now.

We had that chance 30 years ago and we lost it.

We must be brave and radical in our approach. The platform for incremental change that was built up by generations before us was set alight. We have been on a burning platform for the last 30 years. We have to build a new platform.

The solution will emerge from a shared commitment to build that platform. There are many good ideas that must be actioned urgently by a new government, but the people in this room all know that that is not going to be enough.

We need a political leadership that sets as a top cross-party priority, a resumption of the progress stalled thirty years ago.

The Internet Party and its alliance with the MANA Movement bring that mind-set to politics.

We reject the ridiculous message from the National Party conference last weekend that an alternative government will be unstable because we have more parties in the mix. We celebrate the range of ideas, imagination and passion that Labour, the Green Party and Internet MANA represent.

The National Conservative ACT option is monochromatic and hinged on one ideologue at the lead. (Sorry to leave NZ First and the Maori Party out of this Tracey and Marama but until your parties openly commit to changing the government then that’s just how it is).

In 1935 when people voted for Labour they voted from a massive transformation and they got it. Labour were disrupters then.

We need disruption now, because the issues we face now in this room and beyond are every bit as serious as those in 1935.

This is why the Internet Party and MANA Movement have aligned.

I’m not here to say “fix this problem with this solution”. I’m here because I recognise the urgency to build a movement based on a vision of optimism and empowerment.

We are progressive, young and educated, and we’ve figured out that the future doesn’t lie in old models, nostalgia or in running away from transformation.

This means being brave, and I think we can take some lessons in courage from the women we’re all here to support today.

This election is about people, promises and participation. The outcome will be decided by the people that you reach and mobilise through your networks. Your participation will make a real difference. Their participation will allow us to make a new, collective start. With four and a half percent of the Party Vote, I would join Hone Harawira, Laila Harre, Annette Sykes, John Minto and Chris Yong in Parliament. We will work with David, Metiria and their teams to make this difference. Are you ready? Because we are.

Miriam Pierard has been an activist since her high school days. She was most recently the spokesperson for Aotearoa is Not for Sale and is currently an Internet Party candidate.