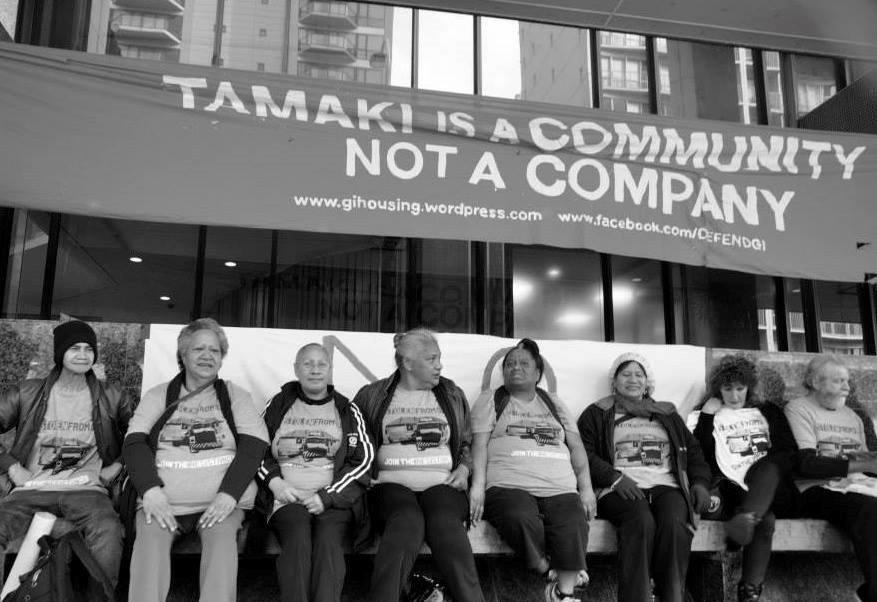 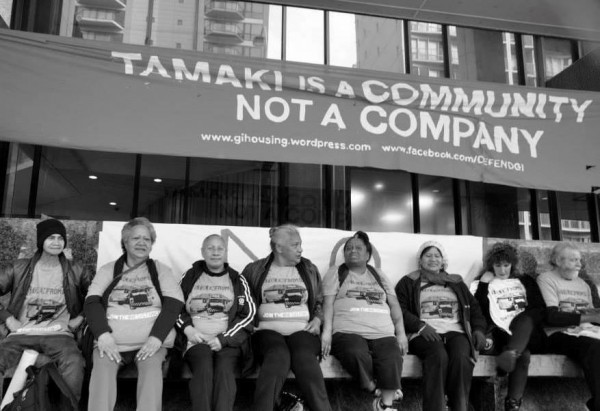 “We will keep on fighting because it frightens me to think my grandchildren could become homeless,” Tere Campbell told me. Tere is a member of Tamaki Housing Group. In September 2011, tenants in 156 state homes in Glen Innes received letters from Housing New Zealand telling them they would be evicted from their homes with no guarantee or right of return to the community.  The Tamaki Housing Group – Defend G.I! was formed to resist the evictions.

“We started because there was no consultation there was no meeting with the tenants and so this has come as a huge shock for a lot of people. We’ve been protesting ever since,” said Tere.

Like Tere, many of the residents of Glen Innes have lived there for decades and raised children there. “My adult childrens friends are friends they’ve known from primary. This is G.I everybody knows everybody , you know someone is looking out for you, that’s the unity that is here,” says Tere.  “Now these people are being transplanted to other communities where they are the outsiders.”Housing New Zealand introduced an anti-social behaviour clause.You could be evicted if your child gets into trouble even though the contract is with you. There is also a ‘dob-a-neighbour’ aspect to the clause. “They ask their tenants ‘do your neighbours drink, do they have many people over?’ It has destabilised this area . Like a depression, its sad now,” says Tere. “They have been loyal tenants for all these years and then that’s how the state repays their loyalty? By kicking them out?”

Unfortunately the experiences of the Glen Innes community will be increasingly common.

Housing New Zealand has now handed over most of its responsibilities to the Ministry of Social Development. This is part of a policy move towards ‘social housing ‘ rather than state housing. Social housing is run by ‘Community House Providers’ – essentially private landlords from various community groups. MSD will decide who fits the criteria for social housing. From July there will be a review of all tenants which will decide whether state housing tenants will continue to be tenants or forced into the private market. The eligibility tests hinge on whether tenants have ‘improved’ their financial position. Important to note is HNZ will not responsible to house families that do not fit the criteria for a social house once they are reviewed.

While rental prices continue to rise beyond the reach of beneficiaries and low paid workers , the government are now profiting from selling their responsibility to house people, and evicting people from their homes.

We should not accept evictions of state housing tenants in our communities. Tamaki Housing Group Defend G.I have shown us how to fight back . They have staged numerous occupations of the houses at the point of eviction.“Once we know the eviction date we head down there and occupy, we don’t budge,”says Tere. We can all be involved in defending G.I and other state housing communities under threat. Head to saveourhomes.co.nz for fact sheets, resources and community action ideas.