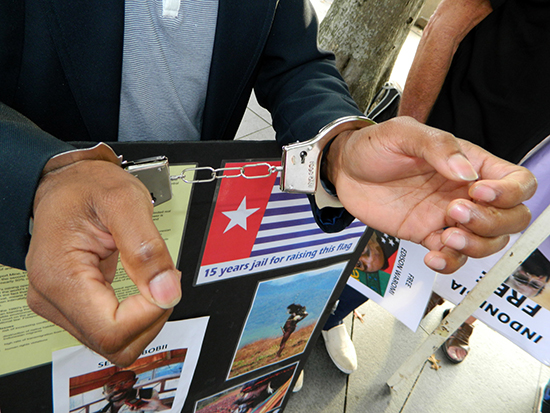 THE INDONESIAN parliamentary elections this week were disappointing on a number of fronts, especially for presidential frontrunner Jakarta Governor Joko “Jokowi” Widodo. His Democratic Party of Struggle (PDI-P) which gained just 19 percent of the vote, was far less than the expected 25 percent. But the presidential vote is not until July.

What about West Papua? What was the fate of representation for the two Melanesian provinces bordering Papua New Guinea this week? Who among the Jakarta hopefuls really have the future of the Papuan region at heart?

Bobby Anderson, one of the rare journalists filing from West Papua, wrote in New Mandala:

In Papua, where state sovereignty and legitimacy is deeply contested, representation matters. So in this national election, who purports to represent Papua?

Candidate residence is one way of sizing up the candidates and the results are telling. Sixty three out of 114 candidates running for the DPR (National House of Representatives) seats in Papua province live within the greater Jakarta area.In neighboring Papua Barat, 17 out of 36 candidates live in greater Jakarta.So, out of a total of 150 DPR candidates seeking to represent these provinces in 2014, only half, 53 percent to be precise, actually live in Papua.

A quick review of CVs indicates that some of these Jakarta residents are ethnic Papuans, and many of them have extensive experience in Tanah Papua.

But a few of these Jakarta-based candidates have never actually lived here. If elected, their ability to adequately represent a constituency that voted for them is open to question.

Representation of residents versus non-residents in Papua province by political party also reveals some surprising results.

The new parties and the ‘presidential’ parties seem to have been particularly successful at attracting candidates who actually reside in the province. Meanwhile, the older, more established parties, who presumably have stronger party machines, continue to stock their candidate lists with non-residents.

For many Papuans, the election had little credibility anyway. As exiled Benny Wenda said in a dispatch a couple of weeks before the vote in a call for a boycott:

Today West Papua is illegally occupied by Indonesia. We have a right to freedom. We will vote in a proper referendum on self-determination.But we will not vote in any election that continues Indonesia’s brutal and occupation of our land.

In 1963 Indonesia invaded our country and terrorised our people. For over 50 years Indonesia has tortured and killed us. The Indonesian military has killed more than 500,000 Papuan men, women and children. For over 50 years we have been dying for our freedom.In 1969, Indonesia threatened 1024 of our tribal elders with torture and death if they did not say they wanted West Papua to be a part of Indonesia. Indonesia’s rule over West Papua is based solely on this event – the terrified acquiescence of less than 1 percent of the adult population. Indonesia has no right to be in West Papua. Indonesia has no right to hold any elections in our land.I am calling to my peoples across our land, from coast to mountain, from island to island. Let us stay strong and united. Do not vote!

Coinciding with the elections, Wenda put out another statement:

We desperately need international attention and support during this time of increased Indonesian military violence in our country. On April 6th 2014, Indonesian military and police clashed with West Papuans at the Wutung border crossing point near Vanimo, Papua New Guinea.

Following this incident, the leader of the Papua New Guinea Opposition, Mr Belden Namah, who grew up in the border area, released a media statement.

He said: “The people of West Papua are being butchered like animals by Indonesian security forces for rejecting Indonesian rule. Papua New Guinea has a moral obligation to raise the plight of West Papuans and and their struggle for independence with the Indonesians and before international bodies and forums.”

When are New Zealand and the rest of the Pacific nations going to stand alongside Vanuatu and stand up and be counted in our condemnation of Indonesia?