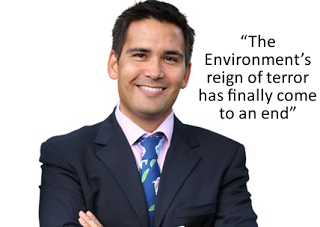 It’s not just cutting deals for big oil companies to limit public scrutiny and ability to complain about drilling and doubling the size for which oil companies can prospect that makes Simon Bridges a terrible mate to the environment, it’s his sheer contempt that allows him to sign off on including a Department of Conservation forest park for oil and gas exploration without being aware that he had even done so…

Bridges actually had to be told by our reporter Brook Sabin that he had opened up the 200,000 hectare Victoria Forest Park on the West Coast for exploration in last week’s block offer.

…if Bridges is being this slap dash with the details so much so that he missed out realising that he was signing away a forest park, then what else has he agreed to without reading the fine print?

For someone who had ambitions towards leadership, missing a 200 000 hectare forest park suggests this may be as high as Simon ever gets inside Cabinet.