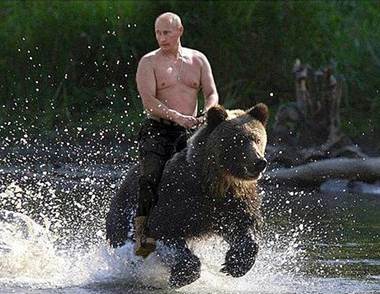 THE US SECRETARY OF STATE, John Kerry, has condemned the turmoil currently gripping eastern Ukraine as the work of Russian agents provocateurs.

“Russia’s clear and unmistakable involvement in destabilizing and engaging in separatist activities in the east of Ukraine is more than deeply disturbing. No one should be fooled, and believe me, no one is fooled by what could potentially be a contrived pretext for military intervention just as we saw in Crimea. It is clear that Russian special forces and agents have been the catalyst behind the chaos of the last 24 hours. Some have even been arrested and exposed.”

There can be little doubt that the Americans will have made an all-out effort to insert their own operatives into the fast deteriorating situation in Ukraine’s eastern provinces. The CIA undoubtedly has agents and assets at work in the region and the Russian news media has reported the presence of several hundred US mercenaries employed by the Greystone Corporation (an offshoot of the private US defence contractor previously known as Blackwater). The US’s interest is hardly surprising, given the CIA’s embarrassing failure to predict the Russian occupation and subsequent annexation of Crimea.

Whether or not the CIA is sharing everything it has with the State Department is a different question altogether. The relationship between State and the US Intelligence “Community” has always been rather fraught. In practical, day-to-day terms, the Secretary’s advisers will be relying on reports from the US Ambassador in Kiev, Geoffrey R. Pyatt, augmented by the official statements of the Interim Ukrainian Government.

These latter should, however, be treated with the utmost caution. The extreme right-wing elements which spearheaded the overthrow of the Ukrainian President, Victor Yanukovych, moved swiftly in the power vacuum created by his sudden departure to seize positions of influence in the country’s security services. Such is the extremism of these neo-Nazi nationalists that the possibility they are doing all within their power to provoke a confrontation between the Russian Federation and NATO should not be discounted.

There is another reason for Kerry’s confident pronouncements on what is happening in the towns and cities close to Ukraine’s border with the Russian Federation. Put simply, it’s because the US pretty much wrote the book on how to destabilize and topple inconvenient regimes. If the combat boot was on the other foot, the Americans would be doing exactly what they accuse the Russians of doing.

The CIA’s destabilization playbook dates all the way back to the early 1950s when the newly formed CIA, alarmed at the emergence of a patriotic, social-democratic government in the Central-American nation of Guatemala, decided to make it the testing-ground for the Agency’s brand new theories about how to secure regime change without leaving too many American fingerprints.

Yes, there would be a small body of highly-trained soldiers, led by a carefully chosen individual who, assuming the operation’s success, could be relied upon to do Uncle Sam’s bidding without demur. But the crucial factor in the Guatemalan coup d’état of 1954 was to be the deployment of psychological warfare techniques, “psyops”, against the democratically elected government of Jacobo Arbenz Guzman.

The forces of Castillo Armas, the coup leader, were weak (no more than 400 men) and his “air force” amounted to a handful of aircraft piloted by American mercenaries on the payroll of the CIA. The rebel forces simply could not have won a direct confrontation with the 6,000-strong Guatemalan Army. But that was not the plan. In combination with the fierce diplomatic pressures being applied by the US Government, it was the CIA’s brilliant use of public relations techniques at home, on its own citizens, and its ruthless deployment of a morale-sapping, panic-inducing disinformation and propaganda campaign against the Guatemalan people, that caused the Guatemalan Army to turn on Arbenz’s government and demand his resignation. It was the only way his generals could see to prevent widespread bloodshed and halt what was, in reality, an almost entirely phantom attack.

If the Russians are planning to seize the eastern provinces of Ukraine from the Interim Government in Kiev, Moscow’s agents and special forces units will undoubtedly be drawing heavily from the CIA playbook. Small, highly specialised units will be training and organising larger bodies of local activists. Constant disinformation and propaganda will be broadcast from “liberation” radio stations across the border – some directed at the supporters of secession, some designed to confuse and demoralise the backers of Ukrainian unity.

Running parallel to the campaign on the ground will be the efforts of outlets like RT (Russia’s equivalent of CNN) to, first, build support for annexation among the Russian population; and second, to broadcast a strong counter-narrative to that of the western news media internationally.

And always, at the back of these efforts, breathing heavily like an angry bear, will be 40,000 Russian troops poised and ready to pour across the Ukrainian border in defence of their “persecuted” Russian-speaking brothers and sisters.

It is this vast force that translates Kerry’s stern words into mere bluster. The United States does not want to unleash a full-scale European land war for the sake of Ukrainian sovereignty – anymore than the Russian Federation would want to back militarily a Mexican attempt to reclaim California, Texas, Arizona and New Mexico from the United States.

Of the other NATO states, only Poland (urged on no doubt by the bite-sized Baltic trio of Latvia, Estonia and Lithuania) has shown the slightest willingness to contemplate a war in defence her Ukrainian neighbour. But then the Poles have never been ones to shirk a fight. Inconveniently positioned on the great invasion routes into and out of Europe, the Polish nation has had little choice. “The Germans we fight out of necessity”, quip the Poles, “the Russians we fight for pleasure!” All very well in the era of sabres and lances, but today’s Russians, if pressed, have a nuclear arsenal to keep an over-enthusiastic Poland (and the rest of NATO for that matter) at a safe distance.

All of which leaves the Interim Ukrainian Government of 2014 in roughly the same position as the hapless Guatemalan Army of 1954 – facing opponents backed by a regional power too vast and too powerful to defy. If they’re wise, they’ll muzzle their extreme nationalists and negotiate Ukraine’s peaceful readmission to Russia’s sphere of influence. If not, they’re likely to rediscover how uncomfortable it feels to be hugged by an angry bear.