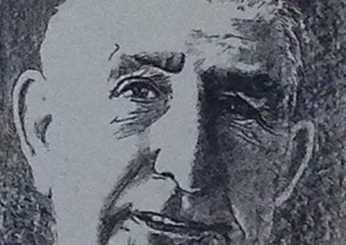 Wellington, NZ, 27 March 2014: Over a hundred people packed the lobby of Trades Hall, at 126 Vivian Street, in downtown Wellington, to commemorate the terrorist attack on the Wellington Trades Hall, thirty years ago;

The bombing, by an unidentified person, instantly killed Ernie Abbott, Vice President, Caretakers and Cleaners Union, and caretaker of the  Wellington Trades Hall.

Live music, provided by the good folk of the  Brass Razoo Solidarity Band (in vibrant, socialist-red);

A diverse mix of people filled the lobby,

Numbers swelling through the late afternoon;

(Note: problem with camera-setting caused some unexpected blurring in images.)

Some of the rooms leading from the ground-floor lobby were opened up to make room for swelling numbers, as those who were not even born at the time mixed with those who lived through that bloody event in our recent history;

As the time approached 5.19 pm – when the suitcase-bomb detonated  on 27  March  1984,  Paul Tolich called for everyone’s attention, and addressed the crowd;

As the clock neared 5.19pm, Paul Tolich, called for a minute of respectful silence, and the lobby and side-rooms fell quiet;

Wellington Trades Hall secretary, Graeme Clarke,   who was Wellington District Secretary of the Federation of Labour in 1984,  was the next person to speak;

“In the 1970s, I wasn’t familiar with the idea that kids went to school hungry. I used to socialise with my workmates and people had enough money to put food on the table, to look after  their kids. But from the 1970, a campaign was organised against the Union movement and it’s been going on, off and on, ever since.

That campaign has been to weaken the Union movement, to divide it, to undermine it, and today we have a situation where 200,000 kids go to school hungry. And that is the legacy of that campaign… of which the bombing here was a part.

And I reflect on that, that as trade unionists, we need to re-double our efforts , to revive and rebuild the movement so that we can actually restore dignity and justice to working people.

My memory of the day was that we were in that room behind us, which in those days room room 2. Before that was that was the Harbour Board Workers Union rooms, and I was at the time the Secretary of the Wellington District Council of the Federation of Labour. We had a wage freeze on, because “wages were the cause of rising prices”, and so Muldoon had frozen wages and there was to be no wage increase whatsoever, while he squeezed rising prices out of the system.

As unionists we didn’t like that. We didn’t think that that was just or reasonable because prices were still going up. And so met in this room to plan ongoing steps in our campaign against the wage freeze. The print room was just around the corner, and our printer, George Thompson, was busy churning out the leaflets. And while we sat in that room, on the other side of the wall, just around the corner, a bomb was sitting.

If it had gone of earlier, it could have taken away the whole of the management committee of the Wellington Trades Council. It was some good fortune that I’m here today, because when we  left, I left with Pat Kelly. And we walked out that door with arms full of leaflets. Pat saw the suitcase, but our arms were too full to actually be bothered with picking up a suitcase that had nothing to do with us.

So we walked out and went to our meeting, and we heard a few minutes after we got to the meeting that there had been some kind of incident at Trades Hall. We came back, rushed back, to find out what had happened…

It was a bomb. There was one victim of that bomb, and that’s what has brought us all here today.”

Graeme was followed by Richard Wagstaff, National Secretary for the PSA and Vice President of the CTU;

Thirty years since Ernie Abbott was instantly killed when he picked up the booby-trapped suitcase lying in the foyer. Doing his job as building caretaker. The violence of his death shocked the nation.

Ernie was a working man. Like so many others, he had come to New Zealand for a better life. He was a union man and vice president of the Cleaners and Caretakers Union. He was a friend of Pat Kelly, the union secretary.

Nobody has been brought to account for the bombing. We don’t know who killed Ernie, though some amongst us have their suspicions.

We do know that it was an ugly time in New Zealand politics. The nation had been polarised by the intimidation and divisive tactics of a domineering prime minister.

Unions were amongst the few to challenge Muldoon’s increasingly dictatorial approach. As he tried to cling on to power, he set out to demonise unions and their leaders. That was the climate of the times.

The bombing was an attempt to kill people who worked for unions. Trades Hall was where the staff of several unions worked. Ernie was the unwitting victim. It could have been so many more.
As we remember that terrible event, let us not forget the other victims of anti-union aggression in New Zealand.

Frederick Evans, batoned to death by a police officer on the 12th of November 1912, during the Waihi strike. Like Ernie, he wasn’t someone in the public eye, but a union member who happened to be there.

Christine Clarke who died on the 31th of December 1999, two days after being bowled over by a angry driver as she stood on a picket-line at Lyttelton Port. Christine was there to show her support for workers in her community who were fighting to keep their jobs.

None of these people – Fred, Ernie and Christine – sought public attention. But we will always remember them.

As we also remember those who went to work and did not return.

This year we have set up a new fund to help the families who have lost a loved one, killed at work.

This Workers’ Memorial Day – Monday 28 April – we will be having a street collection. If you can give an hour or two between 7.30 and 9.30 in the morning, please give your name to Rebecca Matthews.

Let us now take a minute to think about Ernie Abbott and unionists everywhere who have been killed because of their beliefs.”

The last speaker, was Peter Cranney, who in 1984 was Vice President of the Wellington Cleaner’s Union, and is currently a lawyer specialising in workers’ advocacy;

Listening to the speakers, Cath Wallace (L) from ECO, and  Catherine Delahunty, from the Green Party;

As the commemorative service drew to a close, people filed out of the Hall, with some continuing to chat, catching up, and sharing memories of past times;

If we take one thing from this event, it is this…

The nameless individual who, through a vile, cowardly, criminal act, took an innocent man’s life will be forever unknown – much like society’s detritus that lies unmarked and forgotten in land fills dotted around the country.

But the name of Ernie Abbott will live on – remembered as a part of our history.

“Cowards die many times before their deaths; The valiant never taste of death but once.” – William Shakespeare

G.Blog: Sorry Ruth, there is a more evil New Zealander than you after all

The Standard: 30th anniversary of the Trades Hall bombing

This blogpost was first published on The Daily Blog on 29 March 2014.