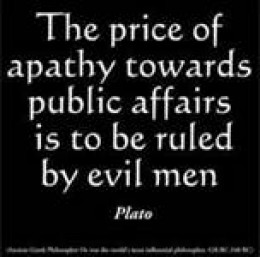 As a teenager, I have had considerable frustration finding other teens that share my passion for Politics.

As we all know, there are many stereotypes for a teenager: loud, showy and obnoxious. A human body clad either in jeans and some angry-looking t-shirt, or a pair of short shorts and a tight tank top.

The other major stereotype meanwhile is a short, bespectacled, either unusually tall or short person with no dress sense; the type of person who goes out wearing track pants and a polar fleece or socks and sandals. You all know what I’m talking about.

These two stereotypes are incompatible, you may think. And I’m not just talking to adults here. My fellow teenagers, pull those headphones out of your ears and listen to me.

This idea couldn’t be more wrong. The idea that you must either be loud, brash, annoying, and not know the first thing about politics, or quiet, gangly, covered in pimples and a expert on everything from Economics to Social Development is total… Rubbish.

I am sixteen years old, and I don’t fit into either of these camps. I am not an Emo, Goth, or any of these annoying clichés. Nor am I a person who spends all their time online gaming. I am your average teenager, who has a few pimples, but has no problem with their dress sense. I listen to punk rock and grunge, but I love history and spend some time working with computers. I do my schoolwork, but I swear, as the saying goes, like a sailor.

See what I’m getting at?

If I can manage it, not being a brainbox with no life outside of Skyrim, nor being a full-scale “Wild Child”, who goes out getting nine year-olds drunk at skateparks, and huffing out of plastic bags, why is everyone else placed in these two boxes?

I now speak, or type rather, directly to Teenagers.

Why should I care about Politics? You may ask. What does it have to do with me? It’s just a lot of middle-aged boring people talking about stuff no one can understand.

What I would say, if you asked me this is, quite simply, It has everything to do with you.

The Politicians are only there, in office, because the people put them there. You are one of the people, you have the tools for change.

Don’t be a Teenage Lobotomy, brainwashed into thinking that you have no influence over the world. Don’t think that you can’t do anything, that nothing you do can change anything. If you are old enough, enrol to vote. Encourage others to do the same. If you aren’t old enough, try and get others interested and involved in politics. If we all do these things, we can end the year with a government we want.