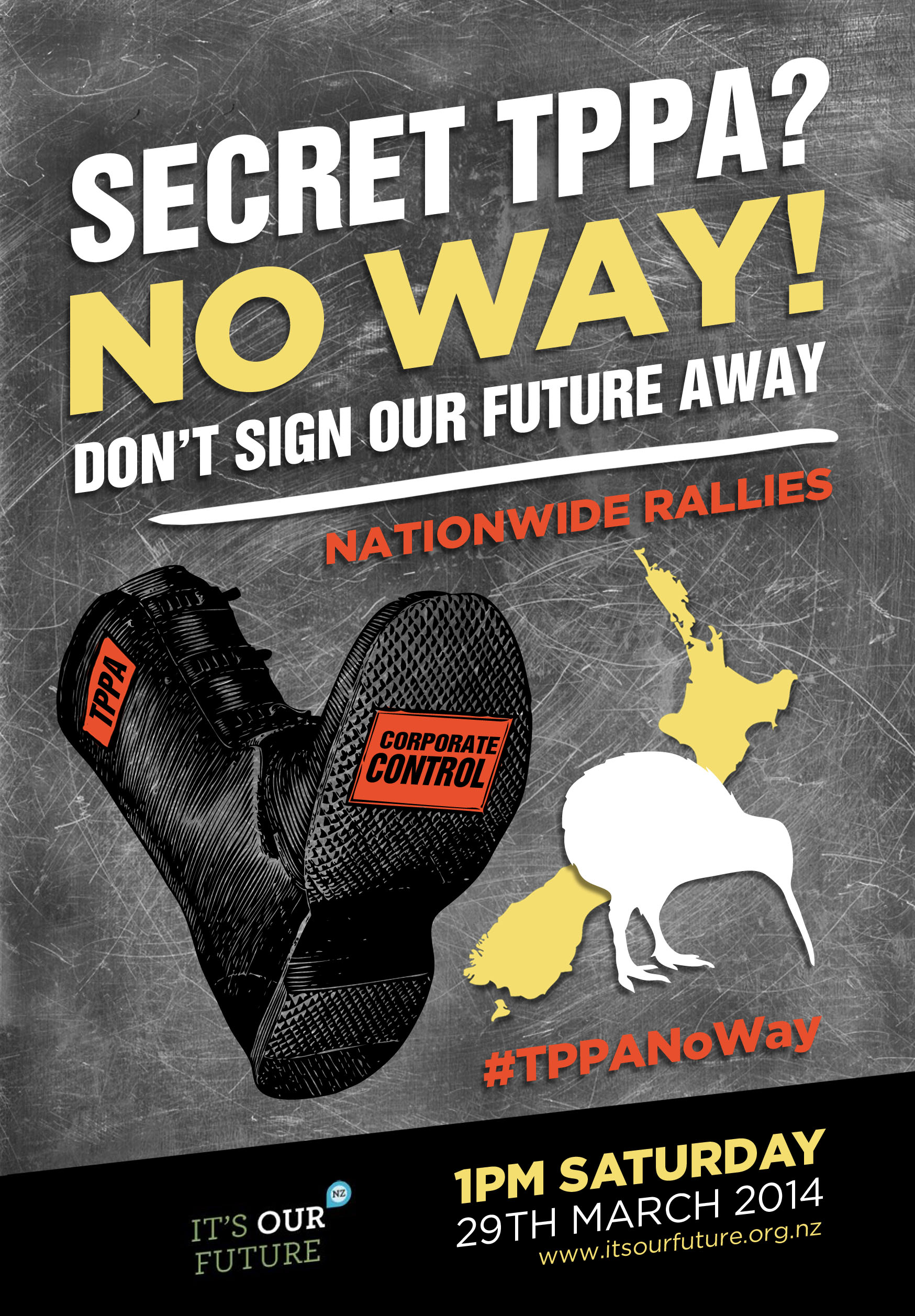 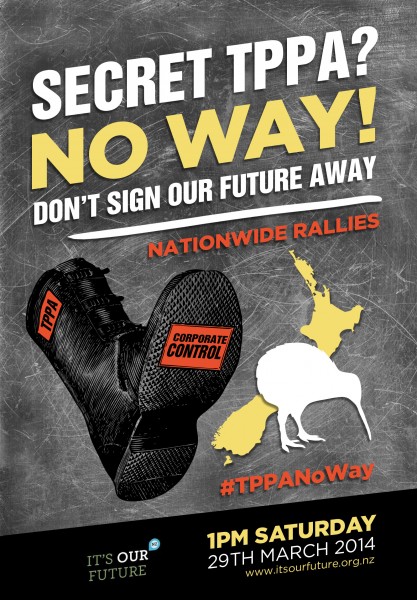 The first round of the Trans-Pacific Partnership Agreement was in Melbourne on 15 March 2010 – four years almost to the day. Four years is enough. Believe me, four years IS ENOUGH!!!!

Kiwis in at least 15 towns and cities across the country think so too. On 29 March people from the Hokianga to Invercargill will hold rallies and marches to stop the secret TPPA.

This is unprecedented. Even the campaign against the Multilateral Agreement on Investment – the MAI – in 1997-98 didn’t reach that far. That campaign, in Aotearoa and other countries, stopped what people dubbed the Boll of rights for TNCs. We can do the same with the TPPA. Join us to say Secret TPPA – No Way!

To find the event nearest you – Hokianga, Whangarei, Auckland, Hamilton, Napier, Tauranga, Rotorua, New Plymouth,  Whanganui, Palmerston North. Wellington, Nelson, Christchurch, Timaru – go to www.itsourfuture.org.nz or the facebook page. Or you can help the organisers or start something in your town.

The obvious question is ‘if it has been going four years, do we really need to worry that they will pull off this deal?’ In the next month or two months? No. In the next few months? Maybe. If they haven’t reached agreement by the end of the year, the chances get more remote.

Both National and Labour will be sighing with relief that the TPPA won’t hit Parliament before the election. As Groser said, even if they reach agreement soon, it would take another six months to sort out the legal drafting and translations.

On one hand, that’s great. On the other, it increases the risk that, if we don’t keep the pressure on, National and Labour could slip back into their cosy bipartisan habits. Remember, Labour has only said it wants to see the text before it makes up its mind. It does not oppose the agreement. Indeed, Phil Goff continues to talk up its potential benefits. There are many others in Labour, and who vote for Labour, who are deeply concerned and oppose the TPPA. But, for now, they can’t do that under Labour’s banner.

Since my last blog there has been another meeting of trade ministers in Singapore. It was preceded by a week where officials tried to finalise the remaining problem chapters, especially for medicines, investment, state-owned enterprises and environment. But the focus of the ministers was on agriculture and the standoff between the US and Japan that is holding up the deal.

If that can get resolved, the rest of the dominoes are likely to fall. Even if the US and Japan reach a deal on agriculture, there is almost guaranteed to be little, of anything, in it for New Zealand. Meanwhile, the minefields that are implanted in the bulk of the TPPA chapters remain. If you want to read more about the ongoing chess game, see my post-ministerial reports on Scoop, Herald Op Ed, DomPost, Fast Track, medicines, and the oped by Dr  George Laking on the implications for cancer medicines.